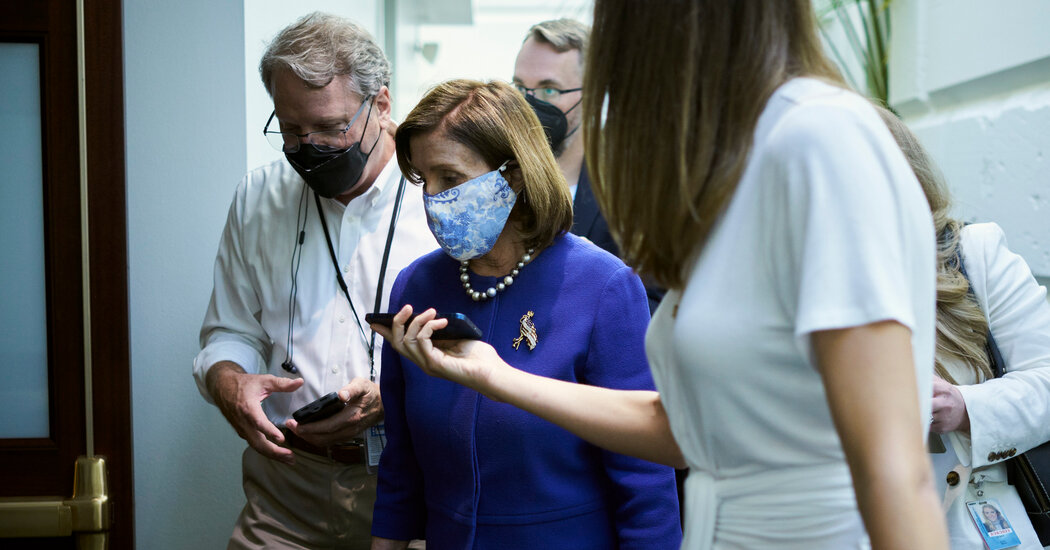 WASHINGTON — Speaker Nancy Pelosi of California signaled to Democrats on Monday that she would push ahead with a vote this week on a $1 trillion bipartisan infrastructure bill, working to salvage President Biden’s agenda in Congress even as the party remained divided over a broader social safety net measure.

Progressive lawmakers have long warned that they would not vote for the infrastructure legislation, which the Senate passed last month, until a far more expansive, $3.5 trillion domestic policy and tax package also cleared the chamber.

But in private remarks to her caucus on Monday evening, Ms. Pelosi effectively decoupled the two bills, saying that Democrats needed more time to resolve their differences over the multitrillion-dollar social policy plan. The move amounted to a gamble that liberals who had balked at allowing the infrastructure bill to move on its own would support it in a planned vote on Thursday.

It also left unclear the fate of the more costly social safety net package, which Democrats are pushing through using the fast-track reconciliation process to shield it from a Republican filibuster. But with slim margins of control in both chambers, Democratic leaders must keep all their senators united in favor, and they can afford to lose as few as three votes in the House.

Ms. Pelosi said her shift in strategy came only after it became clear that Democrats would have to shrink the size of the reconciliation package from $3.5 trillion. Mr. Biden has been negotiating privately with conservative-leaning Democrats to settle on a final number. She outlined her new approach after speaking with the president and Senator Chuck Schumer of New York, the majority leader, as the three worked to unite their members behind the details of the package.

Ms. Pelosi said that Democrats had been on schedule to push through the reconciliation package until 10 days ago, when she heard that the overall cost had to come down, according to a person familiar with her remarks, who described them on the condition of anonymity.

But it has been clear for weeks that conservative-leaning Democrats would not accept the size of the bill.

Lawmakers in both chambers have said they hope to quickly iron out the remaining differences between the moderate and liberal factions of their party, although many of the specific demands from the holdouts remain unclear. Ms. Pelosi reiterated that she would not take up a reconciliation bill that could not pass the Senate.

She told Democrats that the reconciliation measure remained important, but that she wanted to leave time for continued negotiations and to avoid delaying a vote on the bipartisan infrastructure legislation. That bill, now slated for a vote on Thursday, includes $550 billion in new funds over 10 years and maintains a series of key transportation programs set to lapse with the end of the fiscal year on Sept. 30.

But even as Ms. Pelosi sought to rally the party before the vote, it remained unclear whether enough liberal Democrats would back down from their insistence that the reconciliation package move first.

Moderate Democrats remained confident that enough Republicans would support the infrastructure bill to allow it to clear the House, sending the legislation to Mr. Biden’s desk.

Some progressives, however, pushed back on the speaker’s plan to decouple the two bills, saying they would still not be comfortable backing the infrastructure measure until they heard assurances from Senate moderates that they would embrace key components of the reconciliation legislation.

“I would actually like them to make their demands clear so that we can engage with that,” Representative Ilhan Omar, Democrat of Minnesota, said of two key Senate moderates, Joe Manchin III of West Virginia and Kyrsten Sinema of Arizona.

“The bills are linked,” Ms. Omar added. “And they have to be linked in order for anything to pass the House.”

1st Carnivorous Plant Identified In 20 Years Grows Near Vancouver - NPR
Fact Check: Does Donald Trump Want His Supporters to Carry 'Trump Cards'? - Newsweek
Xiaomi Mix 4 is an Android flagship unlike anything else on the market - BGR