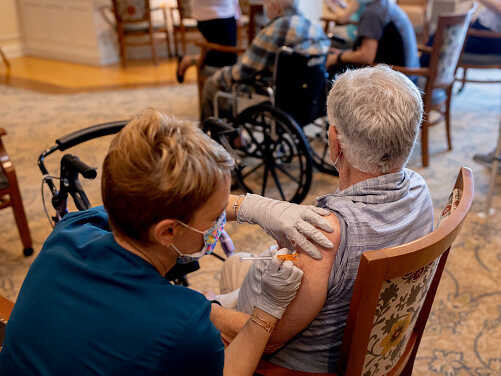 A health care worker administers a third dose of the Pfizer-BioNTech COVID-19 vaccine at a senior living facility in Worcester, Pa., in August. Hannah Beier/Bloomberg via Getty Images hide caption 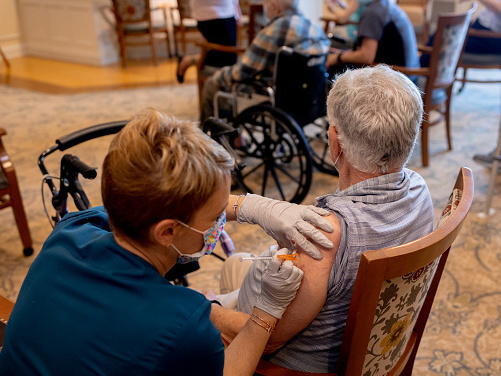 A health care worker administers a third dose of the Pfizer-BioNTech COVID-19 vaccine at a senior living facility in Worcester, Pa., in August.

The Food and Drug Administration released an analysis by Pfizer on the need for a booster shot of the Pfizer-BioNTech COVID-19 vaccine.

Pfizer’s analysis says data from Israel and the United States in the context of the delta variant suggests “that vaccine protection against COVID-19 infection wanes approximately 6 to 8 months following the second dose.”

The company said the available data supports its request for FDA approval of a third dose of the COVID-19 vaccine to be given about six months after the second dose in people 16 years and older.

The agency posted the briefing document and data ahead of a public advisory committee meeting scheduled for Friday. The committee is the same one that voted in support of emergency authorization of the Pfizer-BioNTech vaccine in December.

In an unusual wrinkle, the FDA’s analysis, which would shed light on the agency’s stance, wasn’t released simultaneously. Typically the agency posts its own briefing document at the same time as a company’s.

In support of a booster, some public health officials have cited research that shows a drop in protection from infection with SARS-CoV-2, the virus that causes COVID-19, several months after vaccination. Others have countered that the vaccines remain highly effective in preventing serious illness, hospitalization and death, even against the delta variant.

Some doctors have said the need for a third shot of the COVID-19 vaccine is clearest in groups at special risk, such as people with compromised immune systems or older adults. In August, the FDA authorized a third dose of the Pfizer-BioNTech and Moderna vaccines for immunocompromised people.

As a result of disagreements in the medical and public health communities, the FDA advisory committee’s deliberations may be more contentious this time around. While the agency isn’t required to follow the advice of the committee, it usually does.

The Biden administration has set a goal of Sept. 20 to begin rolling out boosters for people who were fully vaccinated months ago to bolster protection against the virus further. The data for the Pfizer-BioNTech COVID vaccine is the first to make it to the FDA for review.

The administration’s announcement of a target date for booster availability before the FDA, the Centers for Disease Control and Prevention and their experts made their own assessment was controversial.

Details on eligibility and timing of a booster would hinge on the FDA’s decision on Pfizer’s application.

“We have been calling for vaccine equity from the beginning, not after the richest countries have been taken care of,” WHO Director-General Tedros Adhanom Ghebreyesus said on Sept. 7.

He asked for a moratorium on boosters through the end of the year, except for groups of people at high risk, to help every country vaccinate 40% or more of its population. His call for a moratorium has gone unheeded.