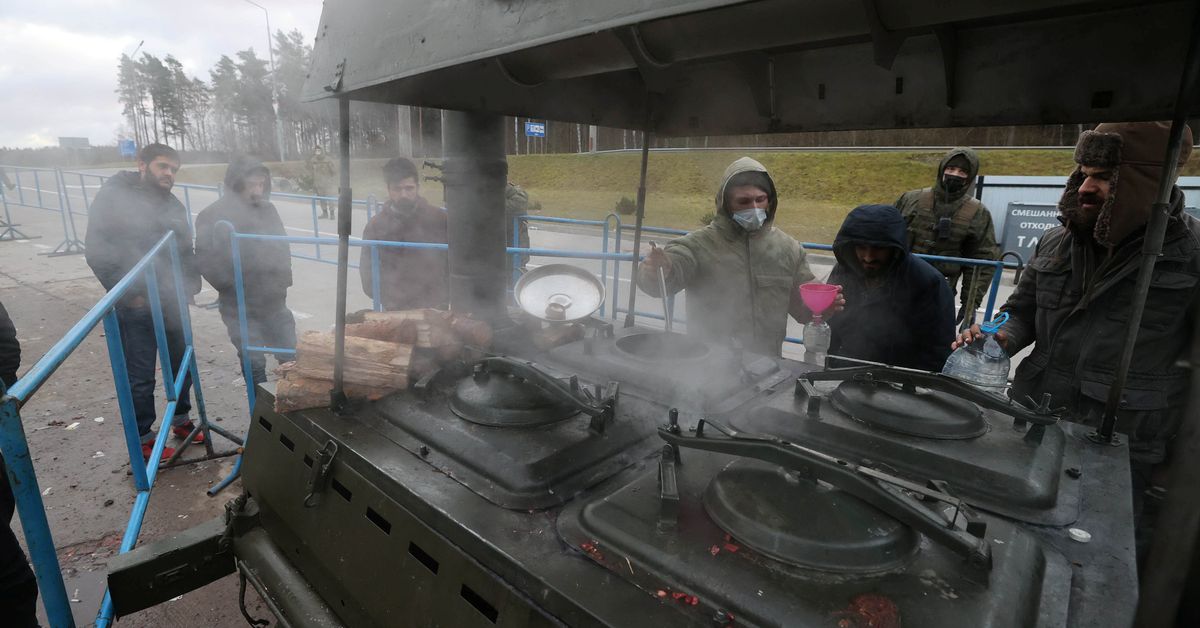 Migrants queue before receiving meals during the distribution of humanitarian aid on the Belarusian-Polish border in the Grodno region, Belarus November 20, 2021. Maxim Guchek/BelTA/Handout via REUTERS

WARSAW/BIALYSTOK, Poland, Nov 20 (Reuters) – The number of migrants trying to force their way into Poland from Belarus fell again on Friday after an apparent change in tack by Minsk that could help calm a crisis that has escalated into a major East-West confrontation.

The Polish Border Guard said on Twitter that there were 195 attempts to cross the frontier on Friday, down from 250 on Thursday and 501 the day before, though Warsaw warned that the migrant crisis was far from over.

Europe accuses Belarus of flying in thousands of people from the Middle East and pushing them to cross into the EU, which has been at odds with Belarusian President Alexander Lukashenko since a disputed election last year.

Belarus, which denies fomenting the crisis, cleared a migrant camp near the border on Thursday and started to repatriate some people to Iraq, but Poland said on Friday that Minsk was still trucking hundreds of migrants to the frontier.

“Yesterday … there were several attempts to forcefully cross the border. The largest group consisted of about 200 foreigners, the others of tens of people. The foreigners were aggressive – they threw stones, firecrackers and used teargas,” the Border Guard said on Twitter on Saturday.

Polish police said that during one crossing attempt on Friday near the village of Starzyna, Belarusian servicemen threw stones towards Polish border guards, policemen and soldiers, resulting in police cars being damaged.

Despite the fall in the number of attempts to cross the border, Polish officials said they expected further tensions.

“No, this political crisis is not coming to an end. Belarus is still interested in escalating and continuing operations against Poland,” Stanislaw Zaryn, spokesman for Poland’s security services, wrote on Twitter.

Polish Prime Minister Mateusz Morawiecki will visit Lithuania, Latvia and Estonia on Sunday to discuss the crisis, a government spokesman said on Saturday.

Migrants in a so-called ‘safe place’ run by locals on the Polish side of the border told Reuters that even after the camp was dismantled, Belarusian security forces kept pushing them to cross the border. One of them succeeded on Thursday night.

“We came through the forests, they (Belarusian forces) were telling us every day ‘Go to Poland’ and we could not cross, so they tried making us cross by force,” a Syrian migrant said.

“It was very tiring, cold, with no food, no water, no warmth or anything. I came looking for a peaceful country, I just want to live,” he added.