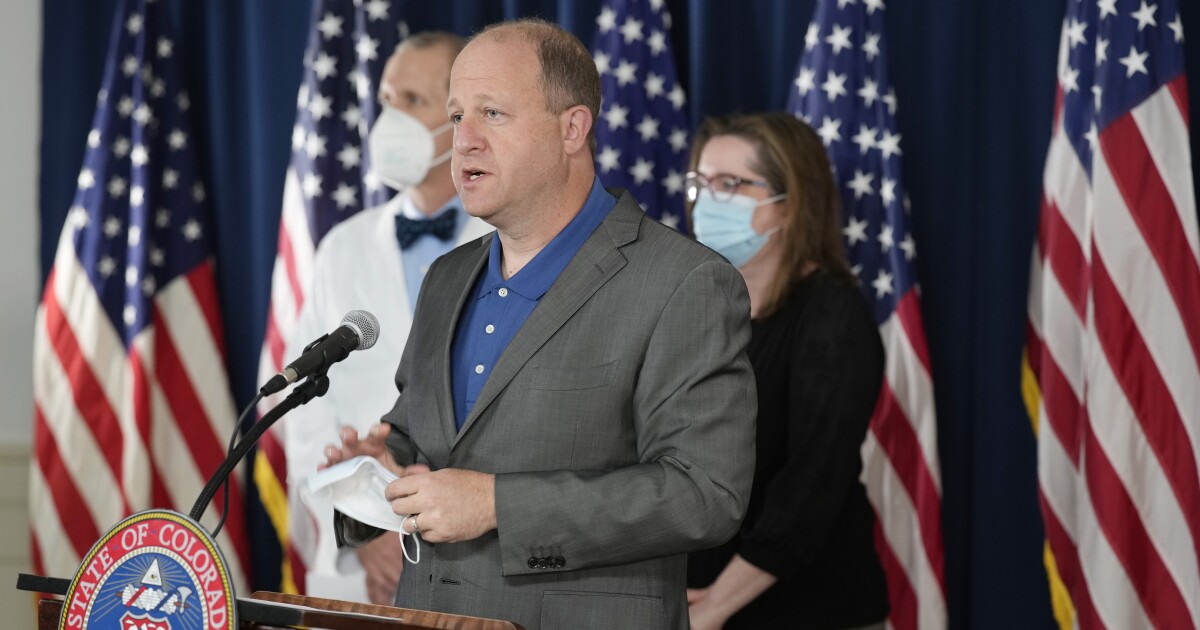 DENVER – Colorado Gov. Jared Polis signed an executive order Thursday formalizing the state’s guidance that everyone age 18+ who meets the eligible timeframe to get a COVID-19 booster shot be allowed to get one — one day after saying the state would try to add 500 more hospital beds within the next month or two to prepare for a continuing surge of the virus.

The order declares the entire state of Colorado as being at high risk of exposure or transmission of COVID-19 and thus eligible for the booster shot.

“There are 1,492 individuals currently hospitalized due to COVID-19, and only 623 hospital beds remain unoccupied across the State,” the order says. “[Ninety-five percent] of Colorado’s intensive care beds are occupied and 94% of medical/surgical beds are occupied.”

The order essentially formalizes guidance under which the state has been operating since booster availability was expanded and which the Colorado Department of Public Health discussed earlier this week.

The state is urging everyone age 18 and up who is six months past their second Pfizer or Moderna shot, or two months past their lone Johnson & Johnson shot, to get the booster shot to increase their body’s protection against COVID-19.

The CDPHE said it had conferred with the Centers for Disease Control about the recommendation and that Colorado was “aligned with CDC guidelines” on the matter.

Polis said during Wednesday’s meeting of the Governor’s Expert Emergency Epidemic Response Committee (GEEERC) that increasing the percentage of people getting booster shots would be one way to help stem the increase in transmission of the virus and hospitalizations, along with adding 300 to 500 hospital beds within the next 30-45 days and expanding the use of monoclonal antibody treatments for people who do get COVID-19.

He said he was frustrated by the FDA and CDC’s rollout and messaging on the boosters, which he said was “bungled,” and added that the executive order was “the way to make it official” that Colorado is a high-risk institution.

State Epidemiologist Dr. Rachel Herlihy presented data showing the effectiveness of the vaccines since July among various age groups in Colorado, which showed waning effectiveness among older population above age 60, particularly among people ages 80+. Among that group, the vaccines were 65.9% effective in preventing hospitalizations and 77.6% in preventing death since the delta variant took over as the main strain of COVID-19 in July.

Polis said that data meant that booster shots were even more necessary for those older Coloradans, who were generally the first to get vaccinated and might be seeing waning efficacy, but who also generally have a weaker immune response.

A modeling report released just last week predicted hospitalizations could reach just over 1,400 in early December, but the state has already surpassed those estimations.

Herlihy said that data showed the state could near or exceed its hospital capacity in December and that other factors, including the flu, could also affect where Colorado peaks. Officials did not discuss how getting more unvaccinated Coloradans vaccinated could affect the projections.

But the state hopes that boosting the use of monoclonal antibody treatments through mobile units and at health care facilities could additionally help reduce the number of people hospitalized because of COVID-19.

Herlihy’s presentation showed that depending on how much the treatments are used, hospitalizations could be reduced by between 200 and 400 people at the peak. Polis said there are now five mobile units deployed and that he would be further discussing the rollout for antibody treatments in a news conference on Friday.

The 300-500 hospital beds Polis hopes the state can create or free up would generally come from hospitals and other health care facilities doing things like reactivating closed floors and repurposing areas like was done last year.

But the Federal Emergency Management Agency – which is already in place working on 20 new beds at Parkview Medical Center in Pueblo and which Polis said would soon be working at two other facilities that were in the process of being finalized – is expected to contribute to that boosted number. Polis said the state wanted to add the beds “in case other interventions are not successful.”

The steps that Polis warned could be taken two weeks ago if the hospitalization surge in Colorado continued have either already been taken or will be taken, Polis said, including asking for the FEMA medical surge teams, reactivating some crisis standards of care, halting cosmetic surgeries, signing an order on the patient transfer system, and upping the use of monoclonal antibody treatments.

A panel also met Thursday afternoon to discuss updates to the hospital crisis standards of care.

Dr. Anuj Mehta, a pulmonologist at Denver Health, presented a draft updated version of the standards he had put together with input from others that builds off the current standards and includes more lessons learned from the pandemic so far.

The panel discussed including more socioeconomic considerations on how and when to treat different types of patients, as well as more potential changes on treatments for various severities of COVID and non-COVID illnesses.

The panel met for an hour and will submit comments and edits by Saturday morning, and the team hopes to have an updated draft version by early next week that would be considered for adoption – and possible activation if hospitalizations continue to increase.