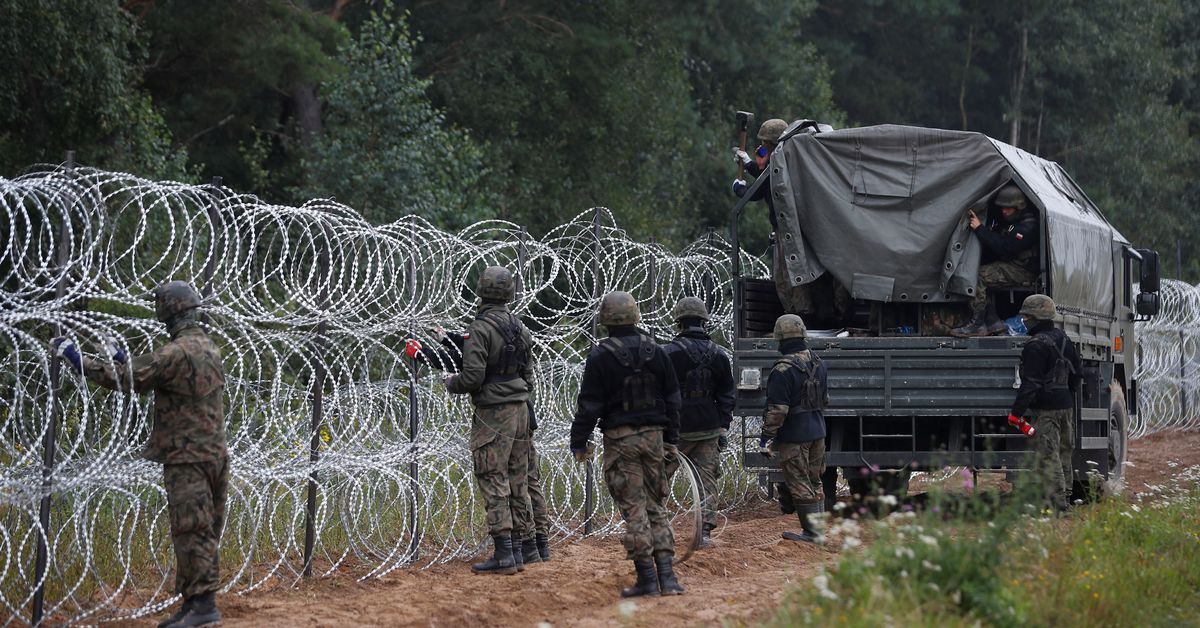 Polish soldiers build a fence on the border between Poland and Belarus near the village of Nomiki, Poland August 26, 2021. REUTERS/Kacper Pempel

WARSAW, Sept 28 (Reuters) – Poland’s President Andrzej Duda said on Tuesday he would request the extension of a state of emergency along Poland’s border with Belarus for a further 60 days due to a surge in migration that Warsaw blames on Belarusian President Alexander Lukashenko.

Poland and fellow European Union states Lithuania and Latvia have reported sharp increases in migrants from countries such as Afghanistan and Iraq trying to cross their borders, in what Brussels and Warsaw say is a form of hybrid warfare designed to put pressure on the bloc over sanctions it imposed on Minsk.

“As we can see, this problem on the border is still there and we still need to do everything we can to prevent it. I believe that introducing this state of emergency for 60 days is justified,” Duda told a news conference.

A state of emergency involves restrictions on freedom of movement in the affected areas, including for the media and non-governmental organisations. The current measures are due to expire on Oct. 1.

Earlier on Tuesday the Polish government said it would ask the president to extend the state of emergency, in line with the constitution. Parliament must grant the final approval, once it gets the green light from the president.

Poland declared the emergency at the start of September, but its nationalist government has faced criticism from human rights campaigners over its treatment of migrants at the frontier.

On Monday Polish Interior Minister Mariusz Kaminski said material related to Islamist extremism had been found on the phones of migrants crossing its border. read more

Poland’s opposition and human rights groups have accused the ruling right-wing Law and Justice (PiS) party in the past of stoking prejudice against immigrants for political gain.