We have some fresh polling results from our weekly collaboration with Morning Consult, and they offer some good news for President JOE BIDEN, whose domestic policy agenda continues to poll above his job approval number, and a warning sign for both parties on a potential shutdown or default.

We also asked what voters thought about the size of the BIF package, and despite the price tag a majority (57%) thought $1 trillion was the right amount or too little to spend:

We also asked voters who they would tend to blame more if the U.S. were to default on the national debt or if there were a government shutdown.

Even though Democrats control Congress and the White House, voters tell us they will spread the blame around. A plurality says they will blame both parties equally, and that’s before this week’s heightened attention to these issues when Republicans plan on filibustering a bill to keep the government open and raise the debt limit.

If there was a U.S. government shutdown, would you tend to blame the Democratic Party more, the Republican Party more, or both parties equally?

If the United States were to default on the national debt, would you tend to blame the Democratic Party more, the Republican Party more, or both parties equally?

One big — if obvious — takeaway: Passing BIF and highlighting the GOP’s lack of support for the spending and debt relief bill is good politics for Biden.

Biden this afternoon indicated Democrats’ legislative deadlines could slip: “It may not be by the end of the week, I hope it’s by the end of the week, but as long as we’re still alive — we got three things to do: the debt ceiling, continuing resolution and the two pieces of legislation,” he said. “If we do that, the country’s going to be in great shape.”

Biden continued to project confidence: “You know me, I’m a born optimist. I think things are going to go well. I think we’re going to get it done.” Sarah Ferris and the Heather Caygle preview House Dems’ caucus meeting today

BOOSTER SEAT — Biden got his Pfizer Covid-19 vaccine booster shot live on camera this afternoon and delivered brief remarks urging unvaccinated Americans to step up and get jabbed. Talking to reporters even as the needle went into his arm, Biden said he didn’t have any side effects from his first shots.

We need to build on what we have to cover everyone and make health care more equitable. To achieve universal coverage, we must: close the low-income coverage gap, permanently enhance premium assistance, and boost enrollment and outreach. See how.

OPEN WIDE … WELL, NOT THAT WIDE — As Democrats squabble over which health care planks to prioritize in their reconciliation bill, the American Dental Association is pushing hard to prevent the expansion of Medicare to include dental benefits for all, WSJ’s Julie Bykowicz reports. Instead, the powerful professional organization is arguing that only the poorest Medicare recipients should get the benefits, because “Medicare won’t reimburse enough to cover [dentists’] costs.”

BACK TO SCHOOL — If they can survive the negotiating gauntlet, the education provisions in the reconciliation bill would amount to what “advocates describe as the most comprehensive package of its kind in decades,” per AP’s Collin Binkley and Lisa Mascaro. That includes universal preschool, expanded child care, free community college, more financial aid for low-income college students and more. But some of these programs would be opt-in for states that cover part of the cost. Other priorities have already gotten the ax, like money for historically Black colleges and universities, and “money to repair aging school buildings could lose out” still.

TOP-ED — Reps. PRAMILA JAYAPAL (D-Wash.), KATIE PORTER (D-Calif.) and ILHAN OMAR (D-Minn.) are out with a new piece for CNN declaring that the Congressional Progressive Caucus supports the bipartisan infrastructure bill but spelling out why they consider the reconciliation bill so crucial. And they make clear they won’t “pause” the latter, as Sen. JOE MANCHIN (D-W.Va.) has suggested.

BACK TO NORMAL — The House will return to keeping votes open for only 15 minutes as it did before the pandemic, Majority Leader STENY HOYER announced, per Roll Call’s Lindsey McPherson.

RED-LIGHT REDISTRICT — Texas Republicans have full control of their congressional redistricting process and intend to shore up GOP-held seats — but population growth in Democratic-leaning areas is acting as a bit of a brake on their ambitions. All in all, the process will probably save Republican incumbents who have gotten close to the brink, without taking a major hammer to Democratic numbers, Ally Mutnick reports. Democratic Rep. VICENTE GONZALEZ is likely the most vulnerable. The map released today

— Dave Wasserman (@Redistrict): “Wow. This isn’t even as aggressive a map as I expected from Texas Rs. It could plausibly be 24R-14D, w/ the chance Rs add seats in the Rio Grande Valley & Dems gain in DFW burbs over the course of the 2020s.” Full thread

— Texas Tribune’s Abby Livingston: “My very very first takeaway from the Texas redistricting map: This is a map drawn for incumbent protection more than anything else. More to come.” Full thread

2022 WATCH — Turns out the Republican handpicked by DONALD TRUMP to take down Rep. LIZ CHENEY (R-Wyo.) has a not-so-unfamiliar trajectory: HARRIET HAGEMAN was originally a vocal opponent of Trump in 2016. NYT’s Reid Epstein reveals that she was involved in trying to prevent Trump from becoming the nominee at the convention and decried him as “racist and xenophobic.” Her turnaround in the past five years marks one of the most extreme transformations of a former Never Trumper in a party full of them.

FOLLOW THE LEADER — After Trump attacked Georgia Gov. BRIAN KEMP at his rally this weekend for not subverting the 2020 election, the statewide Republican candidates backed by Trump all declined to defend Kemp to the Atlanta Journal-Constitution’s Patricia Murphy, Greg Bluestein and Tia Mitchell.

SCOTUS WATCH — Mother Jones’ Stephanie Mencimer has a thorough debunking of the liberal conspiracy theories that Justice BRETT KAVANAUGH is voting for conservative outcomes because he’s taken bribes to pay off his debts. There are much simpler explanations for how he paid them off, she writes, including the fact that he comes from Chevy Chase privilege and “seems to have gotten lots of money from his parents.”

JAN. 6 AND ITS AFTERMATH

A DIFFERENT INVESTIGATION — Betsy Woodruff Swan uncovers new documents on the U.S. Postal Inspection Service’s Internet Covert Operations Program’s involvement in probing social media posts in the wake of the Jan. 6 Capitol attacks. The new details point to “potential gaps in the Jan. 6 select committee’s investigation” and raise “questions about how broad the mandate of the Postal Service’s policing arm has grown from its stated mission of keeping mail deliverers safe.”

IMMIGRATION FILES — After a federal judge ruled DACA unlawful this summer, the Biden administration today is proposing a reconstituted program to protect Dreamers. “The department’s proposal seeks to address the judge’s concerns over how the program was implemented but likely wouldn’t resolve the issue over congressional authority,” WSJ’s Michelle Hackman reports.

LEDE OF THE DAY — Megan Cassella takes a moment to clock what’s happened during the pandemic: “Poverty rates have dropped to their lowest level in more than a decade. Workers’ wages are rising. Children’s hunger rates are falling, bankruptcy filings have plummeted and more people had health insurance in 2020 than the year before.” This unexpected good news, largely the result of emergency government aid the past two years, is invigorating Democrats’ arguments for reimaging the social safety net, Megan writes, though Republicans argue against making the changes permanent.

THE MILLEYON-DOLLAR QUESTION — NYT’s Helene Cooper and Eric Schmitt have a preview of Joint Chiefs of Staff Chair Gen. MARK MILLEY’s appearance on the Hill on Tuesday, when he’s expected to face tough questioning “in what could be the most significant televised congressional hearing involving senior military leaders” since DAVID PETRAEUS in 2007. His testimony will come as military leadership is embroiled in politics in ways it rarely seeks or prefers, particularly during the norm-defying final days of the Trump presidency.

— AP’s Robert Burns and Lolita Baldor profile Milley too: “Burly and square-jawed, with a bushy slash of eyebrows over often mischievous eyes, Milley is quick with a quip and frequently a curse. His oversize personality, born of Irish roots in Boston, belies a sharp intellect and a penchant for digging deep into military history. The Princeton-educated Milley often meets simple questions with a deep dive into history that can reach as far back as the Greeks, cover long stretches of both world wars, and expound upon the context and concepts of war.”

CLICKER — In NYT’s The Morning newsletter, David Leonhardt has a pretty striking set of graphs showing just how partisan Covid-19’s toll has become: There’s a clear correlation between higher rates of deaths and Trump vote share among states, or even among counties within a state. This is an ideological gap, he notes, that’s not replicated in many other countries: “What distinguishes the U.S. is a conservative party — the Republican Party — that has grown hostile to science and empirical evidence in recent decades.”

GOOD NEWS — Covid case rates in the U.S. are now lower than they’ve been since mid-August, per CNN’s Ryan Struyk.

SPOTTED: The two leaders of the Senate Intelligence Committee, Mark Warner (D-Va.) and Marco Rubio (R-Fla.), on the same American Airlines flight from Miami to DCA this morning. Warner had a first-class window seat; Rubio was sitting on the aisle in coach.

ENGAGED — Sam Martin, legislative aide for Sen. Tammy Baldwin (D-Wis.), proposed to Kathleen Hunt, federal government affairs manager at Assurant and a Dick Durbin alum, last week at the Bartholdi Gardens, followed by a surprise party at home. They met as staff assistants in the Senate in 2018, and started dating last year after a long friendship. Pic … Another pic

WEEKEND WEDDING — Zach Swint, a policy adviser at the Republican Governors Public Policy Committee and a Trump White House alum, and Mary Francis McDaniel, an incoming senior knowledge analyst in the energy group at BCG, got married Saturday. The ceremony took place in their home state of Georgia in the North Georgia Mountains. The two originally met in college at Georgia Tech. Pic … Another pic 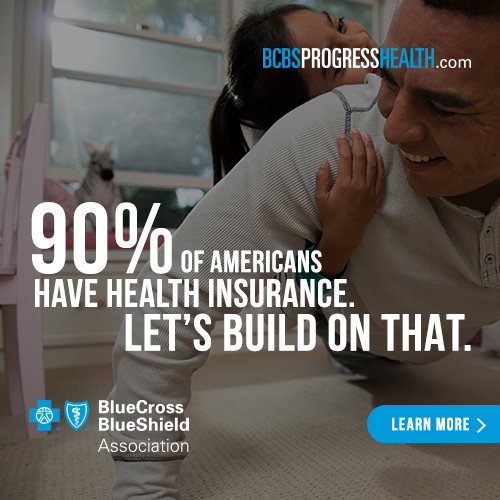 Improving coverage, cost and equity. See how we can build on what we have to cover everyone.