Police in Portland, Oregon, declared a riot in the downtown area Friday night after a protest following the Kyle Rittenhouse verdict became violent and destructive near the Multnomah County Justice Center, authorities said. 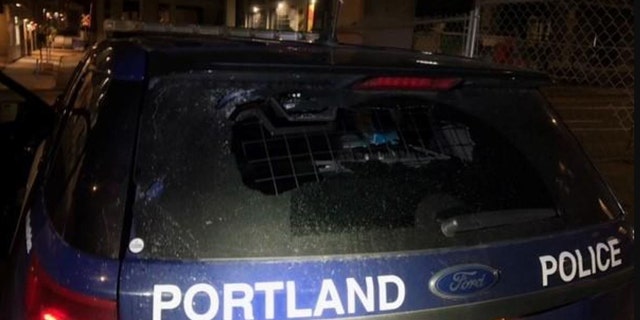 “Due to violent, destructive behavior by a significant part of the crowd, the gathering in downtown Portland is a RIOT. All participants are instructed to proceed away to the WEST,” the Portland Police Bureau wrote on Twitter.

Officials told the crowd that failing to disperse could lead to arrest, pepper spray and impact weapons, according to police and FOX 12. 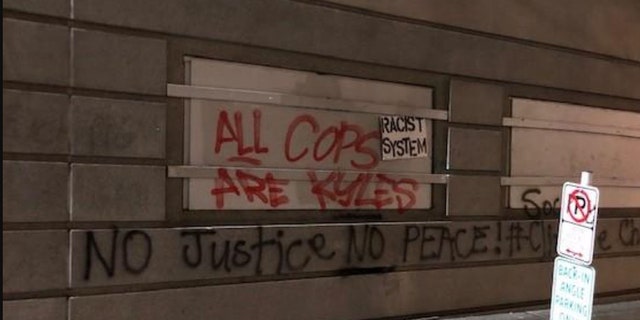 Protesters tagged “All cops are Kyles” on the front of the Central Precinct in Portland during a protest Friday against Kyle Rittenhouse’s verdict.  (Portland Police Bureau )

The rioters smashed the rear window of a police cruiser, windows from the city print shop and tagged the justice center building, police said.

One arrest was made for a warrant. In all, five citations and 17 warnings were issued, police said.

Protesters have taken to the streets across the country to express their disapproval of the Kyle Rittenhouse acquittal. The 18-year-old Illinois resident shot and killed two protesters and wounded another last year during a protest in Kenosha, Wisconsin, that followed the police-involved shooting and wounding of Jacob Blake.

His lawyers argued he acted in self-defense and he was found not guilty on all charges, including intentional homicide. He could have spent years behind bars if he had been found guilty.

Earlier Friday, Portland police Chief Chuck Lovell said the bureau would consider asking other law enforcement agencies for help depending on the situation on the ground. He said it “depends on what information we have and what we feel the level of threat is” regarding whether the National Guard would be called in, KOIN-TV in Portland reported.

Seattle police officers present at US Capitol on January 6 are fired - Fox News
Long lines, stranded passengers and more than half of flights canceled as Spirit Airlines enters fif...
Fortnite’s Ariana Grande concert offers a taste of music in the metaverse - TechCrunch