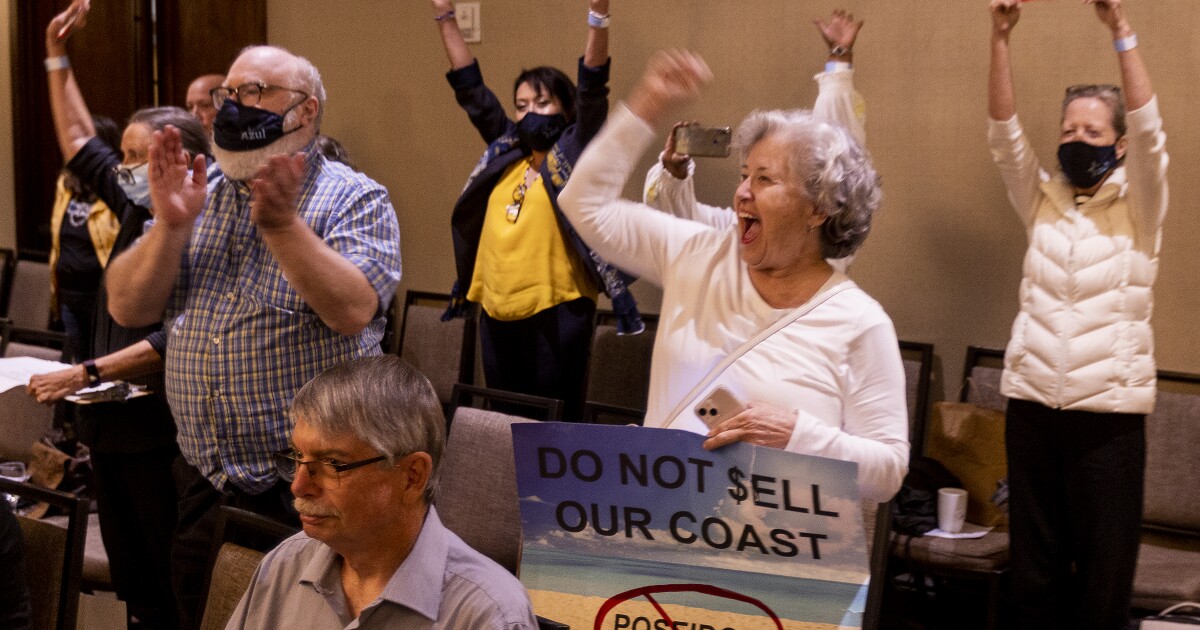 After hearing hours of heated debate, the California Coastal Commission voted against a controversial plan by the company Poseidon Water to build a huge desalination plant in Huntington Beach.

Despite worsening drought and repeated calls from Gov. Gavin Newsom to tap the Pacific Ocean as a source of drinking water, commissioners voted unanimously against the plan Thursday night. The decision, which was recommended by commission staff, may end the company’s plans for the $1.4-billion plant.

In denying Poseidon a permit, the commission demonstrated its independence from the Newsom administration and also sent the message that high costs, vocal opposition and hazards such as sea-level rise can present major hurdles for large desalination plants on the California coast.

The governor had said California needs the desalination plant to cope with extreme drought, and he recently warned that a vote against the project would be a “big mistake.”

Activists, who called the proposal a boondoggle that would privatize water infrastructure for profit, said the decision was a victory for fact-based regulation over politics.

The project was first proposed more than two decades ago, and the long-running fight has encompassed a list of contentious issues. They include the proposed plant’s effect on marine life, whether it was vulnerable to sea-level rise and the company’s heavy political lobbying.

Before casting her vote Thursday night, Vice Chair Caryl Hart said the proposal raised many concerns for her.

“This desal proposal is privatization of water. It provides a large private profit,” Hart said. She agreed with the agency’s staff and said the site is the wrong place to build a plant, partly because it would be atop an earthquake fault.

She also noted that the company still didn’t have a binding agreement from any water district requesting the water. “It would harm the public welfare,” she said.

Commissioner Dayna Bochco said she agreed with the staff’s findings and that the effects on marine life would be “an incredible amount of destruction.”

Meagan Harmon, one of the governor’s appointees on the commission, said the project would have a “disproportionate impact on the most vulnerable.”

“I wish that I didn’t have to take this vote. I’m not opposed to desalination,” Harmon said.

In testimony leading up to the vote, Poseidon and its supporters argued that building the desalination plant would buttress local water supplies and make the area more resilient. They cited the severe drought in California and the western U.S. and higher temperatures brought on by global warming, pointing to the worsening shortages of imported water supplies from the State Water Project and the Colorado River.

Poseidon’s opponents argued the desalinated water was unnecessary because northern Orange County already has ample groundwater supply and is recycling its wastewater. They said the project would only benefit Canadian parent company Brookfield Infrastructure and its investors, while low-income people would be hit especially hard by rate increases.

“Seawater desalination should be the option of last resort,” said Tracy Quinn, president and chief executive of the environmental group Heal the Bay. She said there are better, more economical solutions to bolster water supplies in Orange County.

The company said the costs had yet to be finalized, but that monthly water rates could increase by roughly $3 to $6 per household. The commission’s staff concluded that despite a lack of detailed information on costs, the water rate hike for the project “would disproportionately impact millions of low-income residents.”

When the commission’s staffers recommended rejecting the project last month, they wrote in their report that in this area of Orange County, there is a “lack of a near-term need for the project” and that other proposed water projects — including wastewater recycling — would be more cost-effective and seem able to address projected demand over the coming decades.

Opponents of the project were elated by the unanimous vote.

“This just didn’t make any sense whatsoever. It was the wrong place, the wrong type of facility and basically a foreign corporation that would have privatized water,” said Andrea León-Grossmann, director of climate action for the nonprofit group Azul.

“It’s a very defining moment for the coast. It sends a message to those who want to privatize water, who want to do unsustainable development along the coast,” Jordan said. “That’s why we have the Coastal Commission, to protect against destructive projects like this. They’re an independent body. They are not to be swayed by any politician, no matter how powerful. This is their job, to observe the science and the law. Today that happened, and it’s a great moment for the coast.”

Poseidon Water responded to the defeat in a statement, thanking Newsom and others who had urged the commission to support the project.

“California continues to face a punishing drought, with no end in sight,” said Jessica Jones, the company’s communications director. “We firmly believe that this desalination project would have created a sustainable, drought-tolerant source of water for Orange County, just as it has for San Diego County.”

More than 300 people filled a hearing room in Costa Mesa to hear testimony on the proposal and to voice their opinion. Some held signs reading “No Poseidon! No Wall Street water!” and “We don’t want it, we don’t need it” and “Fight climate change; Support desal!”

In testimony before the vote, some local water officials argued the area needs the water, while others vehemently disagreed.

Doug Davert, president of the East Orange County Water District’s board, said Newsom is right and “we need a new supply of water that is drought-proof and climate-resilient.”

Leaders of Irvine Ranch Water District have said that the water isn’t needed and that approving the project would force communities to pay more for water unnecessarily, increasing costs for low-income communities. Paul Weghorst, the district’s executive director of water policy, called the proposal “a solution in search of a problem.”

During the meeting, the agency’s staff detailed a list of reasons why they determined the permit should be denied, including hazards ranging from sea-level rise to the risks that construction could disturb an adjacent toxic site.

State scientists detailed how the project would cause substantial harm to fish larvae and plankton that make up the base of the marine food web. They said the company’s proposed environmental mitigation projects, including dredging an inlet, restoring coastal marshes and laying down an artificial reef, would be inadequate.

Two days before the meeting, Jennifer K. Roy, a lawyer for the company, emailed commissioners with an attached document that she described as an “Applicant-Proposed Staff Report.” The document was prepared on the same Coastal Commission letterhead as the staff’s report, with the agency’s San Francisco address, Newsom’s name and the state seal.

That document drew condemnation from Poseidon’s opponents, who called the newly written report on official letterhead dishonest and inappropriate.

As the hearing began, Commission Chair Donne Brownsey said she had spoken to the company about the “inappropriate format” of the document.

“This was not a good decision by the applicant to put it on Coastal Commission letterhead, because it did cause some confusion,” Brownsey said. “We have not seen this before. We hope this is the last time we see it.”

D.J. Moore, a lawyer for Poseidon Water, apologized for the confusion caused by the document.

Moore said there is a critical need for the project as water supplies are threatened by drought and climate change.

Last year, the Santa Ana Regional Water Quality Control Board voted to approve a permit for Poseidon Water. That board’s review was clouded by allegations of political interference by Newsom’s administration, which was lobbied by Poseidon.

Ahead of that decision, Newsom was criticized by Poseidon’s opponents when he was photographed dining at a Napa Valley restaurant while celebrating the birthday of a friend who has lobbied for the company.

According to state records, the company has spent more than $979,000 on lobbying in California since 2019.

Poseidon Water proposed to build the plant using some existing infrastructure at the AES Huntington Beach Energy Center, including a 14-foot-wide intake that would draw seawater from the ocean about 1,800 feet offshore. Under the proposal, the desalination plant would have been capable of producing up to 50 million gallons of drinking water a day.

A similar plant 60 miles to the south in Carlsbad, the Claude “Bud” Lewis Carlsbad Desalination Plant, has been churning out drinking water since 2015. Water from the desalination plant, the nation’s largest, is sold to the San Diego County Water Authority under a 30-year contract. The water accounts for about 10% of what’s used by the area’s 3.3 million people, and the Water Authority says the typical monthly cost is about $5 per household.

Santa Barbara also has an operating desalination plant. And in Dana Point, the South Coast Water District is moving forward with plans to build the Doheny Ocean Desalination Project, which would prevent tiny marine life from being sucked in and killed by drawing seawater through slant wells beneath the ocean floor.

Jones, Poseidon Water’s director of communications, said in a statement ahead of the vote that if the permit were rejected, “the path is not clear for new large-scale desalination projects in the state of California.”