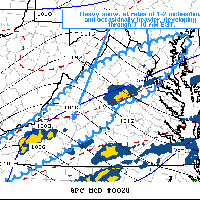 UPDATE 6AM, 2/1/2022: Reports of snow and sleet have been coming in from parts of the New River Valley and also northern parts of the Roanoke Valley as colder air aloft begins to crash downward, southward and eastward in response to a tightening low-pressure system over the Carolinas. Snow will likely overspread most of the Roanoke and New River valleys by 8 a.m. and continue until late morning, with widespread 3-6 inches still appearing likely, locally somewhat more or less. Road conditions may deteriorate rapidly in some areas as heavier snow quickly overcomes surface warmth. END UPDATE

UPDATE 4:30 AM, 1/3/2022: Reports of snow and sleet, sometimes accompanied by thunder and lightning, are continuing to advance eastward over Southwest Virginia as far east as the I-77 corridor. Between now and about 6 a.m., more snow and sleet are likely to be reported across the New River Valley and higher elevations along the Blue Ridge, and between 6 and 7 a.m., into the Roanoke Valley. Low-pressure is deepening almost due south of us in western South Carolina — when that low center passes our longitude moving east-northeast, dynamic cooling will rapidly take hold. The changeover will move quickly once it gets going — temperatures may still be several degrees above freezing when the first ice pellets or snowflakes fall at your location, but the temperature will fall to near freezing rapidly soon after as cold layers rapidly descend and advance. Some of the rain is quite heavy currently in the Roanoke and New River valleys. Heavy rain may flip to heavy snow very rapidly when the changeover reaches your location and elevation. Widespread 3-6 inch accumulation, with some locally lesser or greater amounts, is expected to occur before snow tapers and ends near late morning or midday. END UPDATE

UPDATE 10:30 PM, 1/2: Snow is spreading rapidly from northern Alabama and Mississippi across central and eastern Tennessee on this Sunday evening. This is the mass of precipitation that will eventually spread over southwest Virginia, in response to an upper-level low. A cold front passed Roanoke early this evening, turning winds to the northwest, but so far, as expected, temperatures have only slowly dropping into the lower to mid 50s. It will take the full dynamics of the intensifying storm system over the Carolinas later to pull the cold air down toward sunrise on Monday, with snow expected from then until late morning. Confidence is high in snow falling with this setup. Confidence remains shaky in accumulations, considering the potential for heavy bands that can pile up snow quickly, perhaps even beyond forecasts in some or many areas, or the absence of heavy snow in some areas combined with warm ground keeping them spotty and slushy. 3-6 inches remains the solid median ground for snowfall in much of the Roanoke and New River valleys, supported by much model data and the history of similar storm systems, but don’t be surprised by a little less or a little more, and it may measure quite differently in the grassy part of your yard vs. your driveway. In any event, it will be hours before snow starts to fall in our backyard. Don’t wait up for it if you’re so inclined, get some sleep. That’s my plan. We’ll see where we are with this setup about 5 a.m. END UPDATE

With Roanoke’s temperature sitting at 62 degrees as darkness falls on this second day of 2022, snow may seem like the farthest thing that could be possible, but quite likely it is only about 12 hours away from starting and could come down in some heavy bursts as daylight dawns on Monday.

A winter storm warning goes into effect at 3 a.m. and remains active until noon Monday. During that time, rain that overspreads the Southwest Virginia late tonight is expected to change to snow, from west to east, from higher elevations to lower ones, as cold air is drawn rapidly into a low-pressure system tightening as it passes just south of Virginia, energized by a strong upper-level low.

This rain-to-snow changeover will not be gradual, but will crash quickly across the region. It will reach Blacksburg by 5 a.m., Roanoke by 6 a.m., and Lynchburg by 7 a.m., give or take an hour. That said, temperatures will not drop rapidly at first. It may still be north of 50 degrees at midnight at Roanoke, but once the dynamics of the storm system kick in, temperatures will drop in big chunks toward the 30s — 10-degree or more drops in an hour are not unheard of in similar atmospheric setups. Snow will begin reaching the surface with temperatures above freezing, then drop to near or slightly below the freezing mark by sunrise.

Expect snow lasting until about 11 a.m., the heaviest between about 7 and 10 a.m, possibly an inch or two an hour at times. Accumulations of 3 to 6 inches appear likely over a wide area, though a few spots could come in a little lower and some may go over 6. Accumulations will be variable by elevation and rates in banding, plus will vary quite a bit even at a single location from grassy areas and expose objects that cool quickly to open ground and pavement that hold warmth from weeks of above normal temperatures much longer. The heaviest bands will likely overwhelm the melt rate and lead to slushy accumulation even on city streets for at least a little while.

Forecast models seem to be a tad later both with the rain-to-snow changeover and the continuation of snow into late morning. Since the duration and intensity are about the same, that doesn’t do much to change accumulation expectations, it just means more of the snow will fall in daylight where you can see it.

Snow falling and accumulating the day after highs in the 60s or even 70s is not unheard of in our region, but it is more commonly a late February to April occurrence, not what happens for the first snowfall of the season in early January.

Once the snow moves on, it may not take long for the sun to pop up, and combine with the latent heat in surfaces to quickly melt off any accumulation on paved surfaces. Temperatures, however, will struggle to make 40 on Monday.

Fairly seasonable temperatures with 40s to lower 50s highs and 20s to lower 30s lows — maybe some teens on Tuesday morning — look to set in for the week before another cold front on Friday, which may provide another flirtation with snow. Tis the season, even if it’s not getting cold and staying cold.