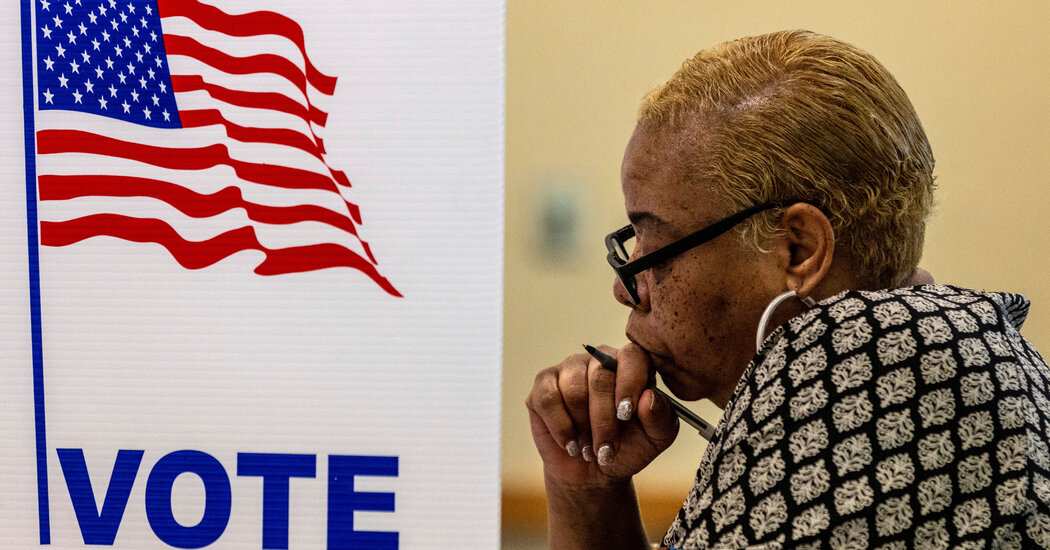 In Ohio, Donald Trump yanked J.D. Vance out of third place to win the Republican Senate primary. In a West Virginia House race last night, Trump catapulted a longtime Maryland politician over the choice of the state’s sitting governor.

Still not convinced of Trump’s extraordinary hold on the G.O.P. base? Keep an eye on Bo Hines. He’s the purest test of the former president’s influence yet.

And that’s just the start of his ambitions. “Governor of North Carolina, and the ultimate goal would be president,” Hines said of his future aims in an interview in 2015 — when he was not yet old enough to buy alcohol.

Hines is just one of eight candidates in the Republican primary, which will take place Tuesday, but both Trump and the Club for Growth, the influential anti-tax group, have backed his bid.

Thanks to their combined muscle, he might well become the G.O.P. nominee in what could be North Carolina’s only competitive House race this fall. If so, it would be a testament to Trump’s power to vault a total electoral novice into contention — and a profound statement about the reality of modern American politics.

“He’s good-looking, he’s got no experience — so he’s perfect,” said Christopher A. Cooper, a political scientist at Western Carolina University.

A talented athlete who entered politics

The story Hines and his allies prefer to tell is of a bright young MAGA star on the rise, while making a virtue of his football record. Announcing his endorsement, Trump called him a “proven winner both on and off the field” and a “fighter for conservative values.”

An introductory ad shows the candidate jumping rope and lifting weights in the gym. “Bo Hines trained for the gridiron,” the narrator says, “learning the values only true competition can teach.”

Hines was indeed a highly regarded athlete. A football phenom as a preparatory school student in Charlotte, he was named a freshman all-American as a wide receiver at North Carolina State. Before he quit football a few years later, citing chronic shoulder injuries, scouts considered him a potential N.F.L. prospect. At his peak, he ran an impressive 4.41-second 40-yard dash.

But then he began to veer toward politics.

“After my freshman year, I transferred to Yale University to study political science and witness the legislative process firsthand on Capitol Hill,” the sparse biography on his campaign website reads. “After graduating from Yale, I pursued a law degree from the Wake Forest School of Law to escape the leftist propaganda of the Ivy League.”

Interviews from around the time of his transfer find Hines speaking openly about his political aspirations. But before this campaign, his working political experience consisted of internships in the offices of several Republican politicians.

One of those internships was for Senator Mike Rounds of South Dakota, according to LegiStorm, a website that tracks congressional staffing. Hines was paid $216.65 for a job he has described as helping Rounds develop alternatives to the Affordable Care Act.

Another was for Eric Holcomb, the governor of Indiana. Hines told an interviewer the job entailed “minimizing bureaucracy in Indiana.”

Hines, whose parents are wealthy entrepreneurs, has plowed three-quarters of a million dollars of family money into his campaign. Voting records in North Carolina show he has voted in only three elections in the state, none of which were primaries.

In the first three months of 2022, his campaign reported zero donations greater than $199 from people within the district and just six from within the entire state of North Carolina. Any individual donation smaller than $200 can be made anonymously.

Luckily for Hines, Club for Growth Action, the group’s super PAC arm, has said it plans to spend $1.3 million backing him in the primary. That’s an enormous sum for a House race.

Before settling on the 13th District, Hines had shopped around for a suitable perch. He announced his intention to challenge Representative Virginia Foxx, a longtime Republican incumbent in the western side of the state, before redistricting altered those plans. In April, he and his wife changed their address to a house in Fuquay-Varina, a town in southern Wake County, the most densely populated portion of the district.

Some Republicans in deep-red Johnston County, a fast-growing rural community, have criticized Hines for, in the words of one local group’s leader, “coming in, just trying to cherry-pick a district he can win.” And Hines’s main opponent, a lawyer named Kelly Daughtry who is the daughter of a former majority leader of the State House, has attacked him as a carpetbagger.

The Hines campaign, which declined to make him available for an interview but fielded a series of detailed questions about his candidacy, notes his upbringing in Charlotte and his time at N.C. State, which is in Raleigh, just north of the district line.

Daughtry has spent more than $2.5 million on the race so far, while contributing nearly $3 million of her own money. She also has taken heat for her past donations to Democrats, including Cheri Beasley, the presumptive Democratic nominee for Senate, and Josh Stein, the state’s attorney general.

Multiple people with access to private polling said Hines appeared to be ahead of Daughtry by a few percentage points, with everyone else way behind. In North Carolina, if no candidate wins at least 30 percent of the vote, the top two finishers advance to a runoff.

The question for Hines is whether Trump’s endorsement and the Club for Growth’s advertisements are enough to put him over the top, while Daughtry’s campaign is hoping that her local bona fides and success as a lawyer will appeal to the sorts of older party stalwarts who tend to show up to vote in primary elections. Early vote numbers so far suggest relatively low turnout in the district.

Charles Hellwig, a Republican political consultant who is advising Daughtry, said he expected the race to be close, but he noted, “Trump backed by money is a pretty potent combination in a Republican primary.”

‘Make sure you know what you believe’

Hines has described his political philosophy in different terms over the years. In a 2017 interview with The Hartford Courant, he said he was “not a social conservative.”

He added: “I call myself a social libertarian, I guess. I’m a lot more liberal on certain social issues. I think it’s part of our generation. I’m hoping the Republican Party in the future will not be so bogged down by the 80-year-olds sitting in Congress who want to regulate how people live their lives.”

Those comments, which the campaign says were “taken out of context,” have earned Hines a negative ad from a super PAC supporting one of his opponents. Hines’s position on reproductive rights is that “abortion should be made illegal throughout the United States. No exceptions.”

In a podcast interview from January 2021, well before the Club for Growth and Trump endorsements, Hines spoke about running a grass-roots campaign focused on bringing economic development, rural broadband and infrastructure to his would-be constituents.

Now, Hines has a Telegram account where he publishes more MAGA-friendly posts accusing Democrats of being “the real segregationists,” of declaring “war” on the police and of “gaslighting a war” in Ukraine.

During his speech introducing Trump at a rally last month in Johnston County, Hines said he was running for office because, “I will not sit idly by on the sidelines and watch radical, Marxist leftists destroy our country for the next generation.”

Echoing a line of attack he has deployed against Daughtry, he continued, “I also will not stand for cowardly, RINO Republicans that seek to dismantle the America First movement.”

A few weeks earlier, in another podcast interview with Matt Beaudreau, a self-improvement guru, Hines passed along some wisdom he had absorbed during his career thus far.

“If you’re not genuine, people are very intelligent,” he said. “They see through that.”

To other young people seeking to enter the political arena, he advised, “Make sure you know what you believe before you try to tell others what to believe.”

Most of Pennsylvania’s congressional delegation tends to keep a low profile on the national stage. But if Senator Bernie Sanders is hosting a campaign event, the spotlight is sure to get a bit brighter.

On Thursday, Sanders will be in Pittsburgh to campaign for Summer Lee, who’s running to replace Representative Mike Doyle, a Democrat who is retiring. The district, which encompasses Pittsburgh, heavily favors Democrats, so barring a huge upset, the primary on Tuesday will determine the area’s next member of Congress.

Lee, who represents part of Allegheny County in the state legislature, has big-name endorsements from national progressives like Sanders and Senator Elizabeth Warren, not to mention all four original members of the so-called Democratic squad and Representative Pramila Jayapal, chairwoman of the Congressional Progressive Caucus. The city’s newly elected mayor, Ed Gainey, is also backing Lee.

Doyle has backed Steve Irwin, a lawyer who based his campaign on a pledge to work with President Biden. Irwin also has the support of Ed Rendell, a former governor, and two former Pittsburgh mayors — Bill Peduto and Tom Murphy.

In other words, the district — after the maps were redrawn, it’s the 12th Congressional District — is preparing for a classic modern Democratic primary.

“This race is more a contrast in styles than a contrast on issues,” said Jay Howser, a media consultant to Irwin. “Steve Irwin and Summer Lee likely agree on 95 percent of issues. It’s just Summer Lee in Congress would be a lone voice holding out to make a point and advance the liberal cause, whereas Steve Irwin is a progressive but he wants to work with President Biden to actually get things done.”

Abigail Gardner, a communications adviser for Lee, sees it differently.

“There are important policy differences, including issues like student loan forgiveness and climate change and fighting corporate polluters, where Summer clearly has a more progressive record and different stance than Steve Irwin,” Gardner said.

Is there anything you think we’re missing? Anything you want to see more of? We’d love to hear from you. Email us at onpolitics@nytimes.com.