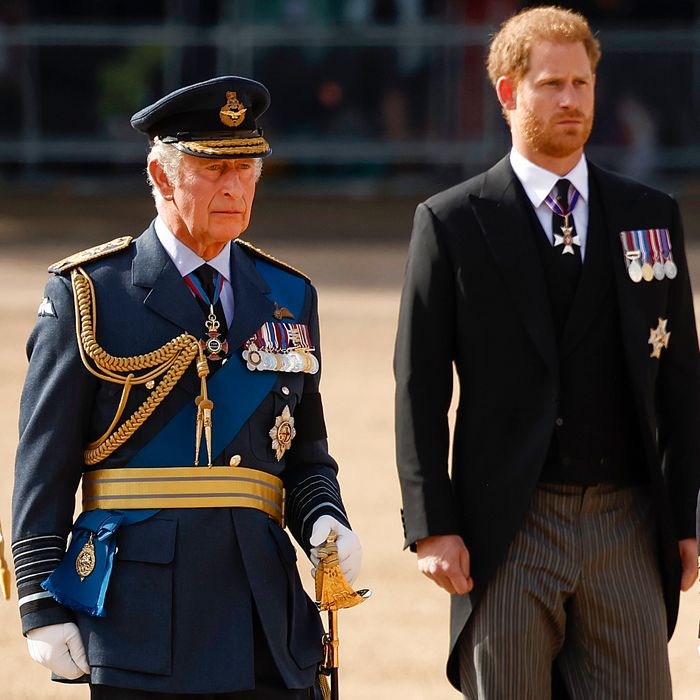 After spending a week dissecting Meghan Markle’s every move — from the way she held her husband’s hand to the creases on her dress — the British press seems to have graduated to a new subject: her husband, Prince Harry. As the royal mourning of Queen Elizabeth continues, rumors about Harry’s tense relationship with his father are growing. And, if reports are to be believed, King Charles III might be the pettiest royal of all.

According to a new report from the Daily Telegraph’s royal correspondent Victoria Ward, via the Daily Beast, Charles waited almost two hours to tell Harry that the queen had died and may have effectively kept Harry from seeing his grandmother one last time at Balmoral. Ward reported that Charles called both his sons early on September 8 to get them to Balmoral to see the queen before she died, but that Harry “received that call some time after Prince William.” She reportedly suggested that Harry was not invited to join the royal family’s private flight to Scotland, which meant he had to scramble to get his own flight to Balmoral. Per the report, Harry’s flight took off at 5:35 p.m. — an hour after Prime Minister Liz Truss had been informed of the queen’s death. Charles didn’t tell Harry about his grandmother’s passing until around 6:25 p.m., five minutes before the royal family released the official announcement. And, to top it all off, Ward claimed that Harry didn’t even get to see his father or brother when he arrived. So much for sending his “love” to Harry and Meghan.

Clearly, King Charles’s reign was off to a great start, and it’s only gotten messier. First, Harry was not allowed to wear his military uniform to attend Queen Elizabeth’s service — something only he, an actual veteran, and Prince Andrew, an alleged rapist, were denied. Then, reports stated that he and Meghan were invited to attend a royal-family reception for world leaders at Buckingham Palace on Sunday, September 18. Many saw the invitation as a gesture of goodwill, until Saturday, when it was announced that the Duke and Duchess of Sussex had actually been disinvited with a palace spokesperson saying that the reception was “for working members of the royal family” only. And all this after King Charles decided that Harry could wear his military uniform to attend a vigil on Saturday night, only to reportedly remove the queen’s “EIIR” royal cypher from Harry’s jacket. A source reportedly told the Sunday Times of London that Harry was “heartbroken” by the move, while a separate source told the Daily Beast, “It was a snub to Harry, as Andrew was allowed to wear them while also no longer an ‘in service’ Royal. It’s twisting the knife a bit.” This claim has been refuted by eagle-eyed fans who noted on Twitter that Harry wasn’t wearing the “EIIR” royal cypher on the day of his wedding, though he has worn it since.

All this sounds exceptionally petty, but there have also been reports that Charles is attempting to reintegrate Harry and Meghan to the royal-family fold. OK reported that Charles was “seriously considering” letting the couple be part-time royals but only if Harry abandons his upcoming memoir. However, “Page Six” reported that Charles is actually planning on removing Harry and Andrew, as well as Princess Beatrice, Andrew’s eldest daughter, from acting as official stand-ins for the monarch. So depending on who you ask, the king is either hoping to convince Harry and Meghan to return to the royal family or already planning ways to distance them further. Meanwhile, reports suggest both William and Harry are keeping things cordial, as evidenced by their walkabout.

Queen Elizabeth’s funeral will be held at Westminster Abbey on Monday, September 19. Soon after, King Charles is expected to make official decisions about the titles to be held by Harry and Meghan’s children, Archie and Lilibet, which, according to reports, could make or break these family relations for good.

Get the Cut newsletter delivered daily

By submitting your email, you agree to our Terms and Privacy Notice and to receive email correspondence from us.