September 20, 2022 – 15:19 BST Phoebe Tatham Prince Harry attended the late monarch’s sate funeral service at Westminster Abbey on Monday – we take a look at some of his sweetest moments

Prince Harry extended his UK stay earlier this month to bid a final farewell to his grandmother at the Queen’s state funeral on Monday.

READ: Royal grandchildren follow in parents’ footsteps with moving vigil for the Queen

In what was an incredibly emotional day, the Duke of Sussex reunited with the royal family as they paid homage to the late monarch who was adored by the nation.

WATCH: William and Harry’s best moments as they unite in grief

Throughout the poignant funeral at Westminster Abbey and subsequent committal service, the father-of-two paused to engage with his relatives. Here at HELLO!, we take a look at some of Harry’s sweetest moments both leading up to and during Her Majesty’s funeral service.

READ: Why Prince George wore navy and Princess Charlotte was in black at Queen’s funeral

Return of ‘The Fab Four’ 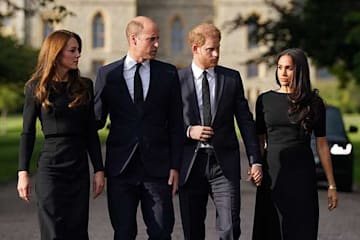 Prince Harry and Meghan Markle reunited with the Prince and Princess of Wales two days after the Queen’s death. Putting their differences aside, the Duke and Duchess of Sussex joined William and Kate as they paid a visit to Windsor Castle to view floral tributes left by the public. 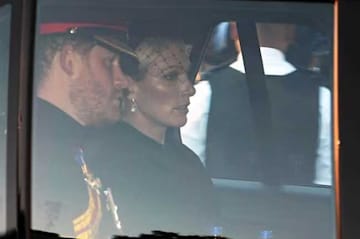 Last week the Duke of Sussex showcased his special bond with his cousin Zara Tindall following Saturday’s moving vigil at Westminster Hall. In a show of solidarity, the duo were spotted leaving together before sharing the same car.

Walking side by side with Prince William 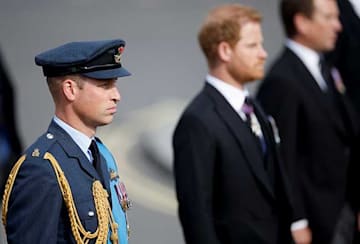 The feuding brothers were united in grief during the procession of the Queen’s coffin from Buckingham Palace to Westminster. The brothers were side by side – unlike at the Duke of Edinburgh’s funeral when their cousin Peter Phillips walked between them.

MORE: All the signs showing Princess Beatrice’s close bond with her grandmother the Queen

The Duke’s sweet moment with Charlotte 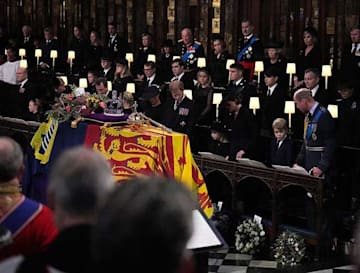 During the Queen’s state funeral, Prince Harry shared a candid moment with his niece, Princess Charlotte. At one point, the Duke of Sussex caught Charlotte’s eye and proceeded to smile at the young royal as she adjusted her hat.

Harry’s exchange with the Earl of Snowdon 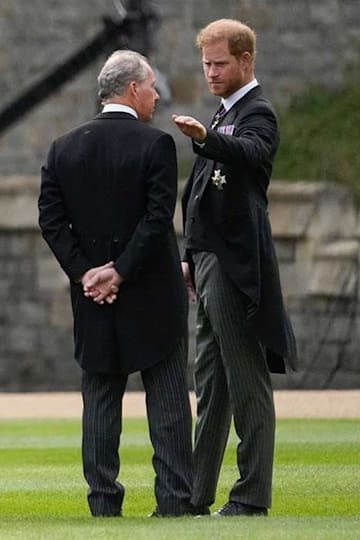 Ahead of Her Majesty’s emotional committal service at St George’s Chapel, Prince Harry stopped to converse with the 2nd Earl of Snowdon – the late Queen’s nephew. In a show of support, Harry tenderly patted David on the shoulder.

READ: Why Sarah Ferguson attended the Queen’s funeral – but not Prince Philip’s

A moment with Princess Anne and Vice Admiral Timothy Laurence 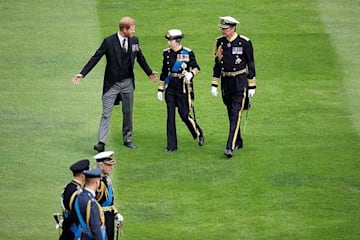 Following the Queen’s poignant service at Westminster Abbey, Prince Harry shared a sweet moment with his aunt, Princess Anne and Vice Admiral Timothy Laurence. Harry and Anne appeared deep in conversation as they made their way over to St George’s Chapel.

READ: What will happen to the Queen’s precious jewels?

Walking in union with Peter Phillips 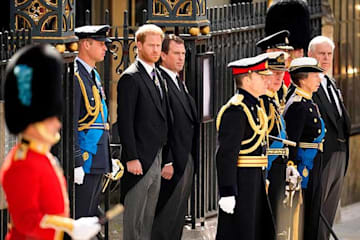 The Duke of Sussex united with Peter Phillips outside Westminster Abbey where they joined King Charles III, Prince William, the Princess Royal and Prince Andrew. Walking side by side, the cousins then proceeded to follow the late monarch’s coffin as it made its way inside the Abbey. 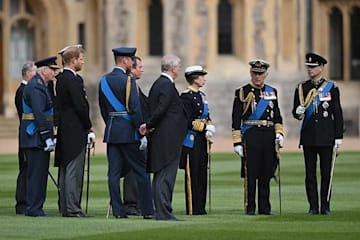 Prince Harry joined members of the royal family as they congregated outside Windsor Castle. The Duke paused for a moment of reflection alongside his father, the Duke of Gloucester, Vice Admiral, Sir Timothy Lawrence, Prince William, Princess Anne, Prince Andrew, the Duke of Kent and Prince Edward.

Make sure you never miss a ROYAL story! Sign up to our newsletter to get all of our celebrity and royal news delivered directly to your inbox.