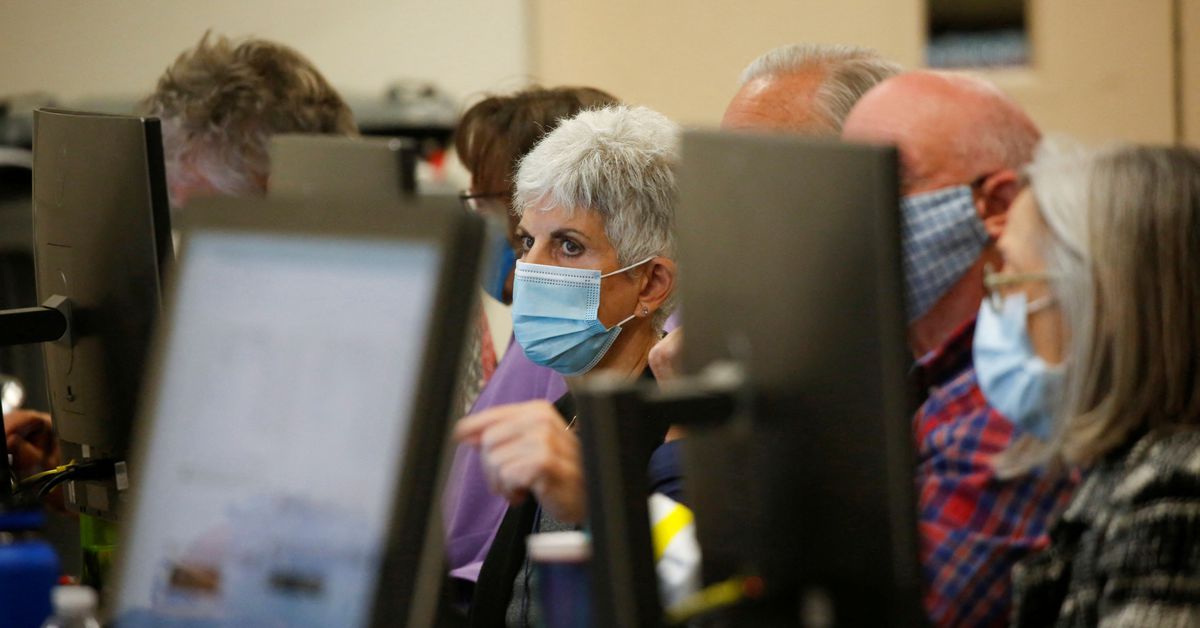 Aug 3 (Reuters) – Pro-Trump operatives are flooding local officials with public-records requests to seek evidence for the former president’s false stolen-election claims and to gather intelligence on voting machines and voters, adding to the chaos rocking the U.S. election system.

The Maricopa County Recorder’s Office in Arizona, an election battleground state, has fielded 498 public records requests this year – 130 more than all of last year. Officials in Washoe County, Nevada, have fielded 88 public records requests, two-thirds more than in all of 2021. And the number of requests to North Carolina’s state elections board have already nearly equaled last year’s total of 229.

The surge of requests is overwhelming staffs that oversee elections in some jurisdictions, fueling baseless voter-fraud allegations and raising concerns about the inadvertent release of information that could be used to hack voting systems, according to a dozen election officials interviewed by Reuters.

Republican and Democratic election officials said they consider some of the requests an abuse of freedom-of-information laws meant to ensure government transparency. Records requests facing many of the country’s 8,800 election offices have become “voluminous and daunting” since the 2020 election, said Kim Wyman, head of election security at the federal Cybersecurity and Infrastructure Security Agency (CISA). Last year, when she left her job as Washington secretary of state, the state’s top election official, her office had a two-year backlog of records requests.

“You still have a group of people in each state that believe that the election was stolen,” said Wyman, a Republican.

In April, the official in Arizona’s Maricopa County in charge of responding to public records requests, Ilene Haber, assigned four of her nine staffers to pull 20,000 documents out of holding boxes, sort them for scanning, and then carefully return them to their proper place. It took four days.

The staffers were filling just one of several records requests from Haystack Investigations, who had asked for chain-of-custody records for all 2.1 million ballots cast in the election. The firm says on its website that it conducts a variety of investigations for companies, law firms and individuals. The company worked on Arizona’s “forensic audit,” the examination of Trump’s defeat in the county by pro-Trump partisans that ended last year without uncovering voter fraud.

The labor-intensive Haystack requests illustrate the growing challenge facing stretched election offices across the country. In Maricopa County, which includes Phoenix, extensive requests like the one submitted by Haystack make up about one-quarter of the total the office has received this year, said Haber, the director of communications and constituent services in the Maricopa County Recorder’s Office.

“The requests are getting bigger, more detailed, more burdensome, and going back even further” in time, she said.

Heather Honey, who heads Pennsylvania-based Haystack, said the requests were unrelated to the firm’s work on the Arizona audit and were for her own research. “All are meaningful and contribute to specific professional research activities,” said Honey, who has sought similar election-related records in Pennsylvania.

The local officials told Reuters that the surge in requests from election deniers is drowning their staffs in extra work at a time when they are struggling to recruit and retain voting administrators vital to democracy. Election workers have already endured an onslaught of death threats and harassment from Trump activists. Reuters has documented more than 900 such hostile messages since the 2020 vote.

“The concern is burnout,” said Jamie Rodriguez, the interim registrar of voters in Washoe County, Nevada. “With burnout does come the potential for mistakes.”

Rodriguez took over this week from the former registrar, who resigned after being targeted with death threats and other harassment.

Ryan Macias, an election security consultant for CISA, likened the swarm of records request to a denial-of-service cyber-attack, in which hackers attempt to overwhelm a network with internet traffic, and said it was creating potential security risks given the stresses already weighing on election workers.

All 50 U.S. states have freedom-of-information laws that are used routinely by journalists, advocates, academics and everyday citizens to access records on government. Such statutes aim to ensure the public has the information needed to hold their leaders accountable. Local officials told Reuters they believe in the importance of such laws and said they are trying to find creative ways to lessen the burden of the election-related requests on their staffers.

Rather than ask for a bigger budget, Haber of Maricopa County said she has trained her whole team to help respond. Washoe County temporarily halts the production of documents at a certain point prior to the election, to ensure staff can focus on administering the vote, Rodriguez said. Donald Palmer, a commissioner on the federal Election Assistance Commission, told a gathering of secretaries of state on July 8 in Baton Rouge that they should help local officials more efficiently respond to the deluge of requests by, for instance, creating a “reading room” site to simultaneously respond to duplicative requests from different people.

Rodriguez said most of her nine current staffers joined in 2021 or 2022 after a rash of staff departures. She is trying to limit their overtime to keep them fresh for November.

But the records requests aren’t letting up. One request sought various information on the county’s election workers during the 2022 primary, including their phone number, mailing address and party affiliation. Another one was filed in late June by Robert Beadles, a businessman who moved from California to Reno in 2019 and is now leading a movement to push election-fraud theories and target politicians who don’t support his agenda. Beadles requested 38 different data sets.

Beadles tells visitors to his website, operationsunlight.com, to send requests to their county clerks for a list of voters in the November 2020 election, broken down by voting method, and the total number of ballots cast for each candidate. He asks them to email the records to Shiva Ayyadurai, a leading purveyor of election fraud conspiracies.

Neither Beadles nor Ayyadurai responded to emails seeking comment.

As strapped government staffs struggle to keep up with the extensive inquiries, some election officials express concern about slipping up and releasing information that could compromise election security.

Samuel Derheimer, director of government affairs at voting-equipment manufacturer Hart InterCivic, said his company has seen an explosion of requests from election officials for help determining when releasing certain records threatens election integrity. Public records requests sometimes target operational manuals containing security protocols that should not be released to the public, he said.

Karen Brinson Bell, executive director of the North Carolina State Board of Elections, said one of the challenges is analyzing whether seemingly separate individuals or groups might be working together to piece together sensitive information about voting equipment and processes.

“That’s when your antenna starts going up,” she said. “We are having to spend a lot of extra time thinking in those terms.”

This story expires at 7:07am on Thursday November 3rd, 2022 and will be deleted!