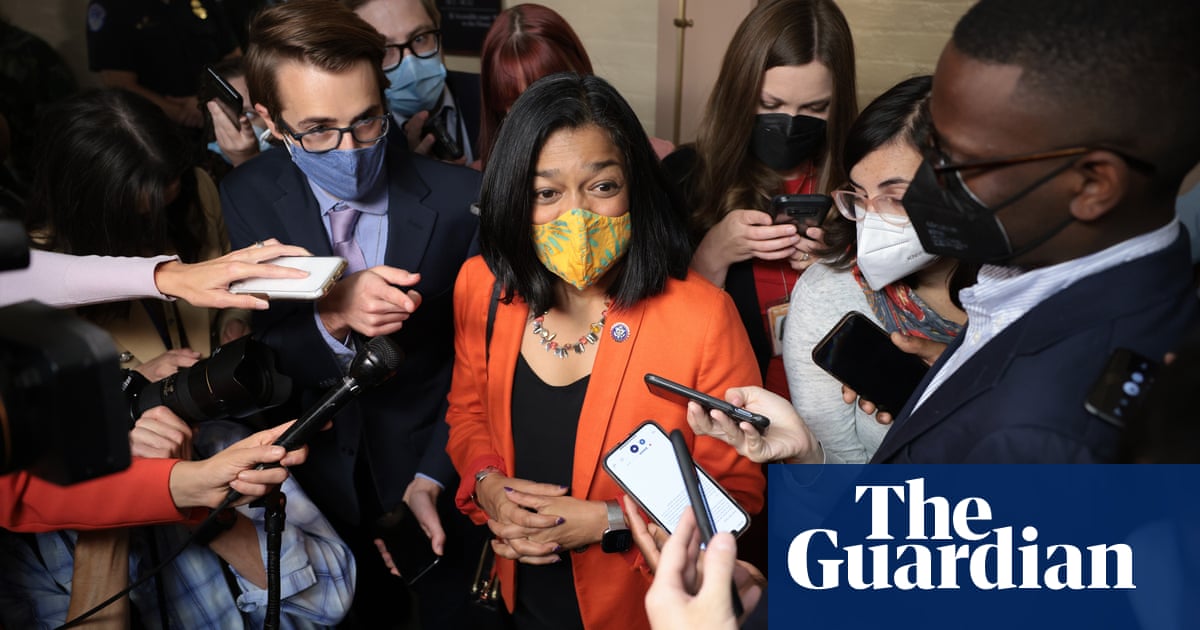 It seemed a throwaway line during a media scrum on Friday outside the House of Representatives. But no other comment by Pramila Jayapal, the chair of the Congressional Progressive Caucus (CPC), highlighted her group’s growing prominence and leverage in Capitol Hill politics: “In the House,” she said, “everybody is a Joe Manchin.”

The Democratic Washington state congresswoman’s point, as the delicate cat-and-mouse game with centrist Democrats over the fate of Joe Biden’s flagship domestic agenda, was clear. West Virginia senator Manchin and his fellow holdout Kyrsten Sinema of Arizona might hold the cards in the 50-50 US Senate, but in the lower chamber at least the progressives were in the driving seat.

That dynamic is set to play out for the month of October now as the fate of Biden’s political ambitions has been suspended for further talks as the president seeks to reconcile warring factions of his party, especially the recalcitrant Senate centrists who have been stunned by progressive strength – with Jayapal at the tip of their spear.

Acknowledging that her party held the House by only a small margin, Jayapal noted that every member wielded make-or-break powers. And by flexing their muscles and forcing House speaker Nancy Pelosi to push back a planned vote on the trillion-dollar infrastructure bill, the group was signaling it was no longer on the fringe of the Democratic caucus, but front and center, guiding its direction.

Jayapal, who was born in India and immigrated to the US four decades ago at the age of 16, has been a key architect in the rise of the progressives during Biden’s presidency. The unofficial coach to the so-called “Squad” of neoteric young women elected to Congress in 2018, including its most prominent members Alexandria Ocasio-Cortez and Ilhan Omar, she has spent much of the summer defending the administration’s ambitious infrastructure and social agendas.

At the same time she made it clear that the 96-member CPC would hold firm in the face of pressure from Manchin and other Senate and House moderates to reduce the price tag of the agenda, as proved when Thursday’s vote was delayed. It is that tenacity that has helped her emerge as a key player in the infrastructure and $3.5tn social package negotiations, and by extension an influential figure in the future successes or failures of Biden’s wider manifesto.

She said on Friday she had been in almost constant contact with the White House and Democratic congressional leaders.

“There’s sometimes frustration, but we’re all part of the Democratic party, this is the Democratic agenda, it’s the president’s agenda and we’re excited to be fighting for the same thing. I’ve been here four and a half years. I still find it strange, but things only happen here when there’s urgency and some reason for people to be at the table. We’ve seen more progress in the last 48 hours than we have seen in a long time.”

Jayapal’s supporters credit her communication skills combined with a hard-nosed determination for maneuvering her caucus into its new authoritative role. She told reporters last week that her message for anybody doubting that the group would block the infrastructure bill unless the social package passed was: “Try us.”

“Pramila has turned the CPC into a strong political force by keeping everyone informed, having people talk through the issues and then make real commitments,” the Massachusetts senator and fellow progressive Elizabeth Warren told the New Republic.

“That force is now being felt when the leadership promised that all the pieces would move together. The CPC is holding that leadership accountable.”