This article was last updated at 15:22 GMT/UTC

The coffin, with the crown jewels placed on top of it, was carried into St George’s Chapel at roughly 16:15 local time (1515 UTC).

“We have come together to commit into the hands of God the soul of His servant, Queen Elizabeth. Here in St George’s Chapel, where she so often worshiped, we are bound to call to mind someone whose uncomplicated yet profound Christian faith bore so much fruit,” David Connor, Dean of Windsor, said opening the ceremony.

“Fruit in a life of unstinting service to the nation, the Commonwealth and the wider world, but also — and especially to be remembered in this place — in kindness, concern and reassuring care for her family and friends and neighbors.”

“In the midst of our rapidly changing and frequently troubled world, her calm and dignified presence has given us confidence to face the future as she did, with courage and with hope.”

The queen’s coffin arrived in the place she called home, Windsor.

A new military procession was carrying the coffin along the famous Long Walk through Windsor Great Park towards the Windsor castle itself.

Thousands more people lined the route as the coffin was taken to the Committal Service at St George’s Chapel.

King Charles and other members of the Royal Family joined the procession in the castle’s Quadrangle. 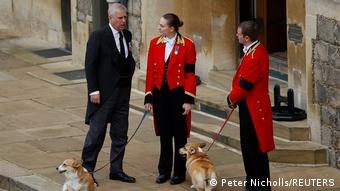 People have gathered all along the way of the queen’s funeral procession to Windsor.

Mourners threw flowers at the convoy as it passed.

There will be another procession in Windsor before a committal service in St. George’s Chapel.

Finally, the queen will be laid to rest with her late husband, Prince Philip, at a private family service.

The convoy bearing the coffin of the late queen passed slowly through the streets of London after it was transferred from the Royal Navy gun carriage, following the state funeral in Westminster Abbey.

Hundreds of thousands of people who had come to pay their respects applauded and threw flowers, as the state hearse passed them by.

Church bells could be heard ringing while many in the crowd cheered in tribute to the queen, with some shouting “God save the queen!” The procession is heading to Windsor Castle where the final private service will be held for the queen.

The coffin of Queen Elizabeth II has been carried from Westminster Abbey following a funeral service and will now be transferred from London to her final resting place at Windsor Castle.

Her coffin was transported on a gun carriage in a procession through the streets of London to Wellington Arch at Hyde Park Corner. Tens of thousands of people are lining the route.

The queen was given a final royal salute to the strains of the naional anthem before embarking on the final journey to Windsor Castle by hearse.

The convoy will now travel to Windsor Castle for a private service some 33 kilometers (21 miles) away. The queen will be interred next to her late husband, Prince Philip. 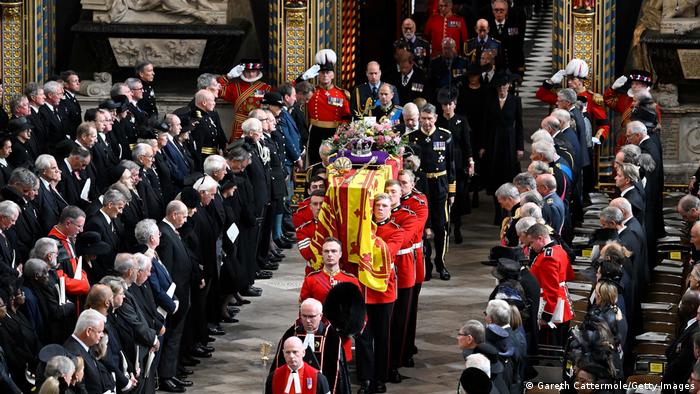 The Dean of Westminster, David Hoyle, led proceedings in the abbey where the queen was married in 1947 and crowned in in 1953.

British Prime Minister Liz Truss gave a scripture reading before a sermon from the Archbishop of Canterbury, Justin Welby.

At 10:55 UTC two minutes of silence were then observed, followed by a rendition of God Save the King.

The queen’s coffin was carried by pallbearers from the Grenadier Guards to the waiting gun carriage of the Royal Navy.

Members of the royal family stood silently as the coffin was placed on the carriage with the procession then beginning through the streets of London.

The queen’s coffin is embarking on its final journey through London and onwards to Windsor Castle for a second, private service.

The coffin of Queen Elizabeth II has arrived at Westminster Abbey for her state funeral service.  Silence descended as the queen’s coffin was carried into the abbey by military pallbearers, closely followed by King Charles and other members of the royal family. Mourners bowed their heads as the coffin with the crown and the Royal Standard passed them by.

The queen’s coffin was carried by the State Gun Carriage of the Royal Navy from Westminster Hall to Westminster Abbey, in a procession, after lying in state for the past four days.

The procession was somberly led to the abbey to the sound of pipes and drums.

Members of the royal family have arrived at Westminster Abbey to the applause of people who have lined area streets.

King Charles arrived along with Princes William and Harry followed by the queen consort and the Princess of Wales in a separate car. 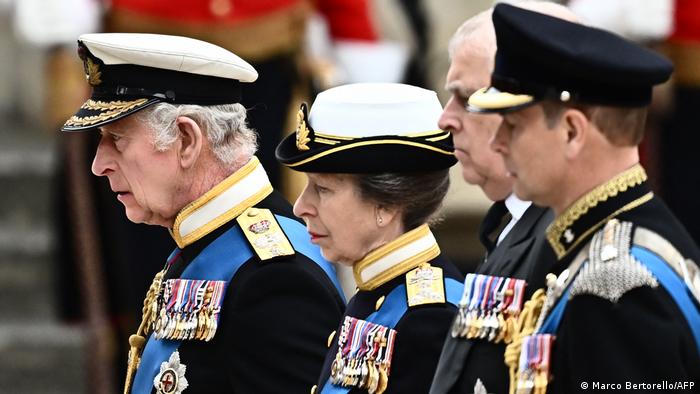 British leaders past and present arrive

John Major, Tony Blair, Gordon Brown and Boris Johnson were seen filing in ahead of proceedings. Their arrival was followed by new Prime Minister Liz Truss.

The prime ministers of the queen’s realms then arrived, among them, Canada’s Justin Trudeau.

Leaders and monarchs from around the world have started arriving at Westminster Abbey for the state funeral service of Queen Elizabeth II. Its understood 400 dignitaries will be attending proceedings.

Meanwhile tens of thousands of people have traveled to the capital and have lined the streets to pay their respects.

Various arms of the military involving thousands of personnel are performing ceremonial functions for a day that has required meticulous planning. 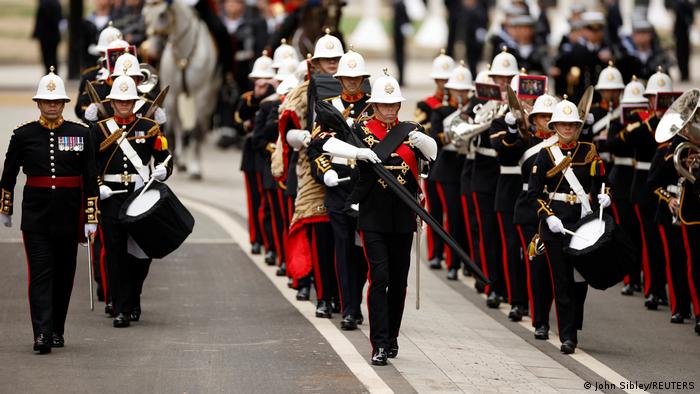 The Royal Marines Band Service are seen at Westminster Abbey

Germany’s Interior Ministry said that flags on public buildings would be flying at half-mast on Monday to mark the state funeral of Britain’s Queen Elizabeth II.

A tweet by the ministry was accompanied by a hashtag “Rest in Peace” along with a picture of the deceased monarch.

Mourners arrive at Westminster Abbey ahead of state funeral service

Guests have begun to take their seats at Westminster Abbey ahead of Queen Elizabeth II’s state funeral service. Dignitaries and world leaders are expected to begin arriving a little later. Heads of state are gathering at a nearby hospital and will then be driven by bus to the abbey.

Westminster Abbey is where the queen was married in 1947 and crowned in 1953.

‘We couldn’t miss this’ — mourners camp along procession route

Thousands of people set up camp on the streets of London ahead of the queen’s funeral procession. Some brought along tents and sleeping bags, while others slept in camping chairs covered by blankets, while others simply lay on the ground with just jackets and coats for warmth.

“This is a once-in-a-lifetime opportunity to be part of history, to pay your respects,” one mourner told Reuters news agency.

Another mourner who had set off in the early hours of the morning said while she had never met the queen, to her it felt like losing a family member.

“It is like we have had a death in the family, we couldn’t miss this,” she said.

Authorities erected 36 kilometers (22 miles) of barriers in Central London to secure areas around the Houses of Parliament and other key areas including Buckingham Palace. Hundreds of thousands of people are expected to line streets of London. London authorities say all viewing areas along the route of Queen Elizabeth II’s funeral procession are full. What is expected during the memorial event and who will attend?

The queen’s lying-in-state at Westminster Hall ended Monday morning shortly after 6:30 a.m local time. At 10:30 a.m. a bearer party will carry the coffin on the State Gun Carriage of the Royal Navy.

The gun carriage will be drawn by 142 members of the Royal Navy through a route lined by the Royal Navy and Marines. The procession will pass by Parliament Square where members of Britain’s navy, army and air force will form a Guard of Honor.

The state funeral will begin at 11:00 am (1000 UTC) at Westminster Abbey, where heads of state and other government representatives will attend. The late queen will then be laid to rest with her late husband, Prince Philip in a private ceremony in St George’s Chapel within in the walls of Windsor Castle.

Around 400 foreign heads of state and dignitaries are expected to attend the funeral, along with members of the royal family and celebrities. Over the past five days, tens of thousands of people waited hours in line to pay their final respects. 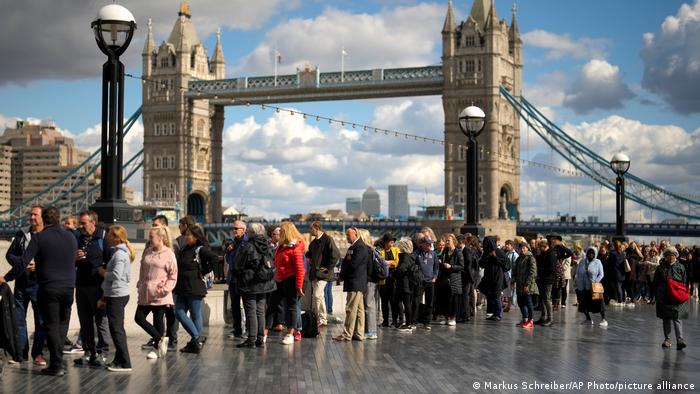 Saudi Arabian crown prince and de facto ruler Mohammed bin Salman was invited to the funeral but will not be attending.

US President Joe Biden and his wife, Jill Biden, will attend. The Bidens were also seen paying their respects yesterday at the late queen’s lying-in-state.