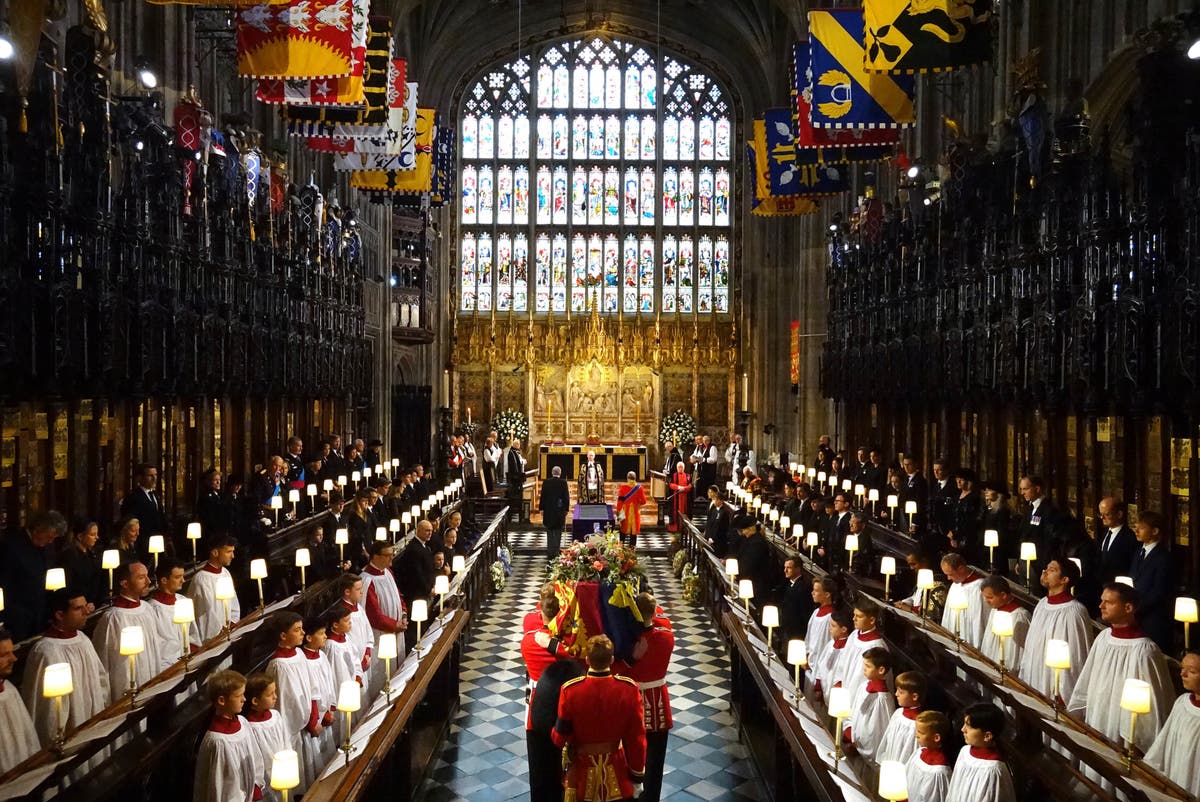 The royal family will observe another week of mourning for Queen Elizabeth II after she was laid to rest on Monday.

King Charles III had decreed a day after the Queen died, that a period of mourning would be observed until seven days after the funeral.

During the period, family members are not expected to carry out official engagements. Flags at royal residences will remain at half-mast until 8am after the final day of mourning.

The Queen was laid to rest at the George VI memorial chapel in St George’s Chapel alongside the Duke of Edinburgh, her parents King George VI and the Queen Mother, and her sister Princess Margaret.

Some 2,000 mourners – including world leaders – attended the funeral service at the 1,269-year-old abbey while thousands of people lined the streets from central London to Windsor.

Culture secretary ‘not sure’ how much Queen’s funeral cost

The culture secretary has said that most British people would think the cost of the Queen’s funeral was “money well spent” – but could not put a figure on what that cost might be.

Speaking to Sky News, Michelle Donelan said that around 250,000 people went through Westminster Hall for the Queen’s lying-in-state, but her department – which coordinated the event – was currently “crunching the numbers”.

Pressed about the cost of the funeral, she said: “I’m not sure of the exact costings but, as I say, I think the British public would argue that that was money well spent. You saw so many thousands out there and I don’t think anybody can suggest that our late monarch didn’t deserve that send-off, given the duty and the selfless service that she committed to over 70 years.”

She insisted it would be “downright preposterous” to suggest otherwise, adding: “It was great sense of the community coming together. I always think of our late monarch as the glue that brought society together,” she told the broadcaster.

Liz Truss has said she was “hugely honoured” that one of the Queen’s “last acts” was formally asking her to become prime minister.

Speaking as she flew to New York for a UN summit, Ms Truss praised the “huge outpouring of love and affection” for the late monarch and said there was a “huge amount of warmth towards” her successor King Charles.

She told reporters: “It has been a momentous period and a period of great grief and sadness in the United Kingdom, and I think you have seen a huge outpouring of love and affection for her late majesty as well as a huge amount of warmth towards King Charles III.

“Today at the funeral we saw such huge public support and I have also seen that from world leaders who have come to London in unprecedented numbers. From my own point of view, I am hugely honoured to have been invited to form a government by Her Majesty the Queen in one of her last acts.

“Since then, I have had two audiences with His Majesty and what I have seen is a huge outpouring of public warmth and support for him and for the whole royal family.”

Many passengers were stranded on Monday evening in Reading, Berkshire, as disruption to train services in and out of London Paddington continued into the night.

Long queues formed at Reading station as people desperately tried to get on to trains to London. Others found their trains cancelled or delayed as they tried to travel further west.

Station staff tried to order taxis for passengers who lived further afield and risked becoming stranded. Some were taken as far as Birmingham by car. Toilet facilities were also closed despite the crowds.

No trains had been able to enter or leave Paddington station since 6.30am on Monday because of damage to overhead electric wires near Hayes and Harlington station.

Services run by GWR, Heathrow Express and the Elizabeth line had been disrupted all day. People travelling to funeral events in Windsor from London were also affected.

A passenger, who asked not to be named, said: “The communication has been diabolical. People have been told to get off trains that were actually running and change services to get to different destinations, only to find that those trains were then cancelled.

“There doesn’t seem to have been any forward thinking as to what would happen in the evening, despite the problems going on all day.”

The clean-up operation has begun after thousands of people queued in London to see the Queen’s lying in state and to witness her funeral, with many laying floral tributes for the late monarch across the Royal Parks in recent days.

The queue to Westminster Hall, where the Queen’s coffin was lying in state, began in Southwark Park, about five miles away.

Council officials said they had completed a full inspection of the line’s route through the borough and cleared any litter.

Southwark Council said that, after a brief pause for the funeral, staff would continue to work with government officials and the events company involved “to make sure that Southwark Park, in particular, is fully open and returned to its former splendour”.

In Southwark Park alone, many staff worked 24 extra hours over the four days of the lying in state to keep the green space clean, the council said.

Read the details in this report by Aisha Rimi:

Millions around the world watched from afar as 2,000 people – including members of the royal family and hundreds of foreign dignitaries – gathered for the state service at Westminster Abbey.

The funeral began after King Charles III led a procession from nearby Westminster Hall, where the Queen had been lying in state since last week.

During the service, the Archbishop of Canterbury echoed the words spoken by the Queen to the nation during the Covid-19 pandemic and said “we will meet again”.

He added that the “grief” felt around the world over the Queen’s death “arises from her abundant life and loving service”.

Mr Miliband, who has been based in New York for the past decade as executive director of the International Rescue Committee, one of the world’s leading humanitarian organisations, described the late Queen as “always dignified but not stuffy”.

He recalled his interactions with the late monarch during an interview with The Independent on Monday as he took part in the opening ceremony of New York Climate Week.

The global event gathers business, government, and climate leaders in conjunction with the United Nations General Assembly which is also taking place in Manhattan this week.

Why is no one allowed to sit in front of monarch at big events?

Royal protocol dictates that the seat in front of the reigning monarch is left empty during notable events, including weddings and funerals.

During the committal service at Queen Elizabeth’s funeral, the seat in front of King Charles III was empty as he sat in the second row of St George’s Chapel in Windsor beside his wife Camilla, the Queen Consort.

The seat was the same one his mother sat in during the funeral of Prince Philip, her husband and the King’s father who died in April 2021.

It was previously thought that an empty seat during royal events is meant to represent a member of the royal family who has passed away.

However, the empty seat in front of the King is royal protocol so the monarch’s view of proceedings isn’t blocked.

The seven-year-old daughter of the Prince and Princess of Wales told her nine-year-old brother, who is second-in-line to the throne, that he “has to bow” when the funeral cortège passed them.

The great-grandchildren of the late Queen Elizabeth II stood with senior royals as they watched the coffin make its journey from Westminster Abbey to Windsor Castle, where it will be laid to rest at King George VI Memorial Chapel in a private burial.

The young prince and princess attended the funeral services at both Westminster Abbey on Monday morning, and in St George’s chapel in Windsor on Monday afternoon, with their family.

Young royals praised for their behaviour during funeral

The royal family has released a previously unseen photo of the Queen after her private burial took place.

The photo of the Queen was taken at Balmoral, which is believed to be one of her favourite places in the UK, in 1971 and shows her hiking in the moorlands surrounding the castle in Scotland.

The image was shared on social media with a caption from Shakespeare’s Hamlet: “May flights of Angels sing thee to thy rest.

“In loving memory of Her Majesty The Queen.

The quote is the same phrase King Charles III used at the end of his first TV address as the new monarch.

Photo was taken at Balmoral, believed to be one of her favourite places

The royal family is observing another week of mourning for the Queen after a state funeral full of emotion and ceremony under the gaze of the world.

King Charles III decreed on September 9, the day after the Queen died following her 70-year reign, that a period of mourning would be observed until seven days after the funeral.

Buckingham Palace said: “Following the death of Her Majesty the Queen, it is His Majesty the King’s wish that a period of royal mourning be observed from now until seven days after the Queen’s Funeral.

“Royal mourning will be observed by members of the royal family, Royal Household staff and representatives of the Royal Household on official duties, together with troops committed to ceremonial duties.”

The family members are not expected to carry out official engagements, and flags at royal residences will remain at half-mast until 8am after the final day of royal mourning.