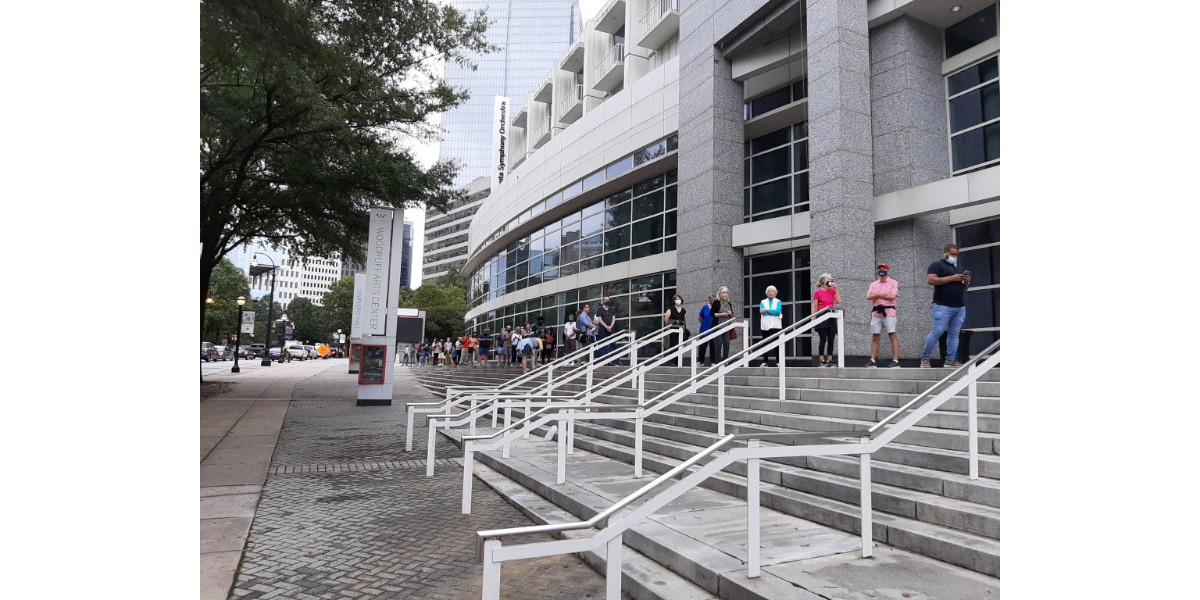 Tuesday’s primary election for Georgia governor, secretary of state, Congress, state lawmakers, and a host of other races is expected to draw large numbers of voters to the polls after a record turnout during early voting.

For much of early voting, lines were minimal; however, in the final days, lines started to lengthen in places like Gwinnett County’s Board of Elections Office, where some voters said they waited for an hour or more to cast their vote.

The Republican primary turnout greatly outpaced Democrats by a margin of 406,388 to 299,232. A higher than usual percentage of voters who typically vote for Democrats cast GOP ballots, with attention-grabbing races and the Trump-effect playing out at the top of the ticket. That includes a gubernatorial primary in which Gov. Brian Kemp holds a healthy lead over Donald Trump-endorsed former U.S. Sen. David Perdue and a U.S. Senate GOP primary led by former University of Georgia football star Herschel Walker.

Meanwhile, Democratic front runners Stacey Abrams, who is running for governor, and U.S. Sen. Raphael Warnock could coast to victory in the primary while a June runoff is expected with the crowded field of the candidates for secretary of state, attorney general and lieutenant governor

DeKalb County voter Amelia Dunbar said Friday that she avoided voting for the less extreme Republicans and focused on the Democratic candidate she preferred with a realistic chance to defeat their opponent come fall.

“This election is important for the direction that our state is heading in so I voted for the primary candidates I thought would have the best chance to win,” said the 42-year-old who works in medical billing.

Overall voters reported last week being able to successfully cast their votes, although the concerns ranged from needing a larger number of voting machines available to a more difficult absentee ballot process, one of the changes in the GOP lawmakers 2021 election law overhaul that faces its first statewide test in the primary.

The early voting totals included more than 655,000 ballots cast in person and another 54,000 absentee ballots.

“The record early voting turnout is a testament to the security of the voting system and the hard work of our county election officials,” Raffensperger said in a statement. “As Secretary of State, I promised to strike a strong balance between access and security in our elections, and these numbers demonstrate that I kept that promise and that voters have confidence in Georgia’s elections”

David Levine, elections integrity fellow at the Alliance for Securing Democracy and a former election official, said that the early voting turnout is especially impressive given so much election misinformation and the new election law that places more obstacles in accessing the ballot box.

“It’s important because if Georgia voters are voting in high numbers during early voting, it means the processes in place are being tested out in advance,” Levine said. “Hopefully if there are issues that are existing there, whether it’s with a poll book, with a piece of equipment, or it’s with a poll worker, that’s something that election officials can see and adjust to.”

With absentee ballots allowed to be turned in by 7 p.m. Election Day, the numbers will continue to rise but fall well short of 2020 when a record number 1.1 million voters in a presidential primary in the early stages of the pandemic led to absentee ballot applications getting sent to every active registered voter.

The rejection rates on absentee ballots will become one of the measures of Senate Bill 202’s impact as the new law added an ID requirement, that the signature must be written in ink, and placed further restrictions on a 2020 emergency rule that made around-the-clock-drop boxes widely available.

“If you’re going to end up reducing access, you ought to have reasoning that is scientific, that is justified either for security or access related reasons,” Levine said.

For poll workers, the new law means they’ll have to continuously tabulate ballots throughout the night and meet a 5 p.m. deadline the day following the election. Proponents of the new ramped up deadline say it will instill more confidence in the election system as opposed to a more drawn-out process that often played out in 2020.

However, those new rules put more pressure especially on county poll workers in larger metropolitan areas where the election supervisors might have to coordinate staggered shifts to avoid overworking staff after ‌a ‌busy‌ ‌Election‌ ‌Day.

Provisional ballots can now only be cast‌ after 5 p.m. on Election Day. The new rules will also prove to be a challenge for poll workers, who need to be knowledgeable about sometimes confusing provisions.

The new deadline for certification has moved from 10 days to 6 days after Election Day.

The nonprofit organization has crafted a guide for Georgia voters.

Aguilera said it’s a myth that voting laws that erect more barriers to voting are designed to impact large numbers of voters so it’s missing the point when large turnout numbers are used as a way to dismiss concerns about voter suppression. The true test of the effects of Senate Bill 202 will play out on Election Day when many of its rules will have a more significant factor.

“What it does is it makes it harder for a few 100 or a few thousand people on the margins to vote because of some sort of barrier they’re not able to overcome,” she said. “It might be that they have more to do in order to vote and they’ve got so much going on in their lives like family matters, work that they just give up and feel apathetic.”

During the final week of early voting, Cobb‌ ‌County‌ ‌Republican‌ ‌Party‌ ‌Chairwoman‌ ‌Salleigh‌ ‌Grubbs‌ ‌expressed concerns about ballots with an incorrect candidate, missing cityhood referendums and several instances where the statewide system to check in voters temporarily shut down across Georgia.

Various counties also experienced ballot problems that were exacerbated by a late start to the U.S. Census and the ensuing redistricting process that made it more difficult to update local maps in time for the primary.

Numerous Georgians reported being unable to review sample ballots on the secretary of state’s‌ ‌website.

“Although the problems may be considered minor, I believe personally that it is indicative of systemic failure,” Grubbs said at a Wednesday State Election Board meeting.

“In this atmosphere of partisan tension, we need to do everything we can to simplify the process, make it transparent for all candidates and parties and ensure that election laws and regulations are upheld,” she said.

The majority of the election related issues are normal during elections, but the new district boundaries have created unique problems having to adjust to redistricting, secretary of state attorney Ryan Germany said last week.

“We had a condensed redistricting cycle due to the delay in the Census,” he said. “The counties have been working diligently to complete that redistricting as quickly as possible.”