Rep. Andy Biggs described the southern border under Joe Biden as “out of control” and “dangerous” as migrants and drugs continue to flood the border and children are often left behind.

The Arizona Republican joined “The Faulkner Focus” to call out the Biden administration for the humanitarian crisis and for not keeping the Remain in Mexico policy in place.

“There is going to be deaths,” Biggs warned, emphasizing the extreme heat migrants will face along the southern border in the summer months. 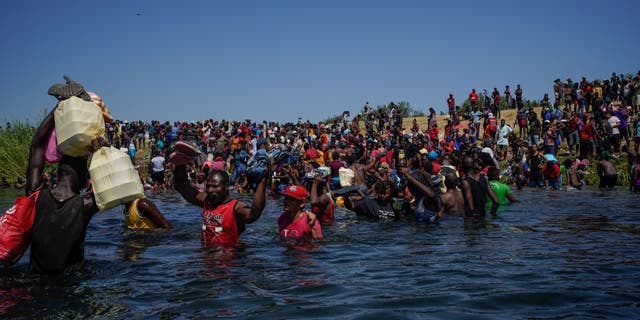 Haitian migrants, part of a group of over 10,000 people staying in an encampment on the US side of the border, cross the Rio Grande river to get food and water in Mexico,  after another crossing point was closed near the Acuna Del Rio International Bridge in Del Rio, Texas on September 19, 2021.

According to Biggs, there were 1,800 encounters – meaning arrests or surrenders to Border Patrol – last weekend.

“It’s more than the monthly total who were sent to Mexico to await their asylum process, which, by the way, in most cases is going to be bogus. That’s what’s going on in the borders. It’s overrun right now,” he told Harris Faulkner.

Biggs addressed the humanitarian crisis facing children as a result of the open border policies and incentives to migrate illegally to the United States.

“I hate to say this, but some of these kids are rented out by parents who can’t afford to pay the coyotes to the cartels. So they let their kids be used over and over again to create these false family units. All of that horrific inhumanity that goes on when you don’t secure your border,” he explained.

In May, Border Patrol encountered more than 239,000 migrants. This number does not include so-called “got-aways.”

Biggs called on the administration to address the sexual abuse of women and children and sex trafficking that is occurring at the border and at overcrowded processing facilities.

Meantime, the organizer of a massive migrant caravan attempting to make its way to the United States says that the Mexican government has offered work visas to migrants, which would allow them to travel freely through the country.

While that would grant the migrants the ability to work in Mexico, it would also give them the ability to travel freely throughout the country — meaning that many of them will likely continue their journey to the U.S.-Mexico border and seek to gain entry to the U.S.

The caravan set off from Tapachula, Mexico two weeks ago and has so far met little resistance from Mexican authorities.

Elizabeth Heckman is a digital production assistant with Fox News.