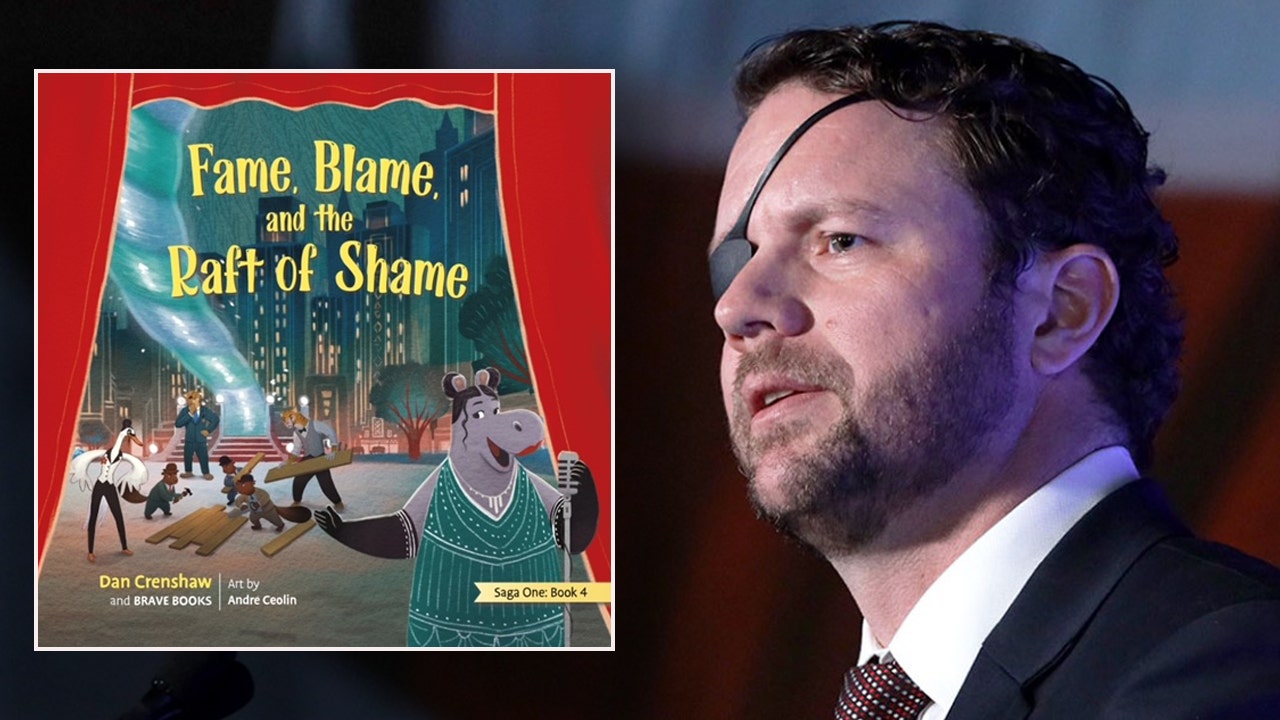 EXCLUSIVE: Rep. Dan Crenshaw, R-Texas, explained how his recent children’s book is a fable meant to warn about the dangers of cancel culture.

“You’ve got reach all audiences,” Crenshaw told Fox News in an interview. “Parents are increasingly frustrated by their school’s curriculum. They can go find left-wing progressive and woke children’s books out there. It’s pretty hard to find exclusively conservative-themed children’s products.”

Explaining how Brave Books approached him about the project, Crenshaw said he saw it as an opportunity to fill that void.

“Fame, Blame, and the Raft of Shame” is the fourth in a series of titles by conservative authors from Brave Books.

Founded by CEO Trent Talbot earlier this year, the conservative publisher seeks to be “a conservative alternative to the current cultural activism that our children are being taught in schools, in the entertainment they watch and the books they read,” according to its website.

“I think the way they do it is pretty cool, using a variety of different conservative authors who write about different themes within the same sort of universe,” Crenshaw said of their project.

Though written for children and featuring various cartoon animal characters, the themes in Crenshaw’s book get to the heart of the culture wars.

Crenshaw, who played an intimate role in crafting the story, explained that defining cancel culture for children was “kind of tricky.”

“I think conservatives wrongly view cancel culture as a very simple question of either being able to say whatever the hell you want or being silenced,” said Crenshaw. “It is not that simple. And I wanted to craft this story that kind of exposes the nuance of what we mean by cancel culture.”

The story takes place in an underwater city protected by a dome of seaweed, which begins to crack as more characters are banished for various offenses and hurled through the dome on a “raft of shame.”

Readers who are familiar with Crenshaw’s story will see parallels in what both the animals and the congressman have experienced.

Regarding one incident between a skunk character and a mountain lion that is an unmistakable reference to Crenshaw’s interaction with comedian Pete Davidson in 2018, Crenshaw explained why the story emphasizes the importance of forgiveness.

“The reason immediate forgiveness made sense in that case was because of intent,” he said of the Davidson controversy. “And intent is a really important question that I don’t know if people ask these days. Did the person intend you harm, or did they just make a really dumb joke that just didn’t land right?

“Are they being canceled and yelled at because of something they did or said that was maybe clumsy and maybe stupid—and maybe they should apologize for—but they didn’t mean any harm toward anybody?

“Cancel culture often jumps to that conclusion: that the person is intentionally bad, intentionally meant that microaggression … and it’s just not true.”

The end portions of the book are replete with activities and exercises for parents and children to examine the lessons of the book, which are reinforced with Bible verses.

The congressman stressed the importance that faith plays in overcoming cancel culture.

“Faith is about grace, right? Showing grace even in the face of your enemies. That’s also the very clear message of forgiveness. And Christianity, of course, is linked with a sense of grace. So it’s easy to use the Bible, and I think necessary to use the Bible, as a way to guide sort of our moral actions and how we forge relationships with one another.

“The Bible is full of stories that help us on that path,” he added. “And so it will always be useful in that regard, I think.”

Crenshaw also warned about where American society is headed if cancel culture is not eradicated.

“People are just becoming angrier, more resentful, more bitter, more divided,” he said, adding that he is concerned cancel culture “is manifesting in some dangerous ways that manifest in more blatant actions.”

Pinpointing the censorship from Big Tech, which he said is banning debate on issues that demand nuance, Crenshaw said such an attitude is also rife in the universities and even in corporations. Such a culture, he said, has cultivated an environment where most Americans are afraid to speak their minds.

“In polls, 80% of Americans think political correctness has gone way too far,” he said. “So that’s the good news, right? This is what I try to tell people who think they need to bow down to the cancel culture mob. They’re usually corporate CEOs or something like that. ‘You don’t have to!’ That loud minority is just a very small minority. Twitter isn’t real life.

“I wish the adults in the room would learn that,” he added.