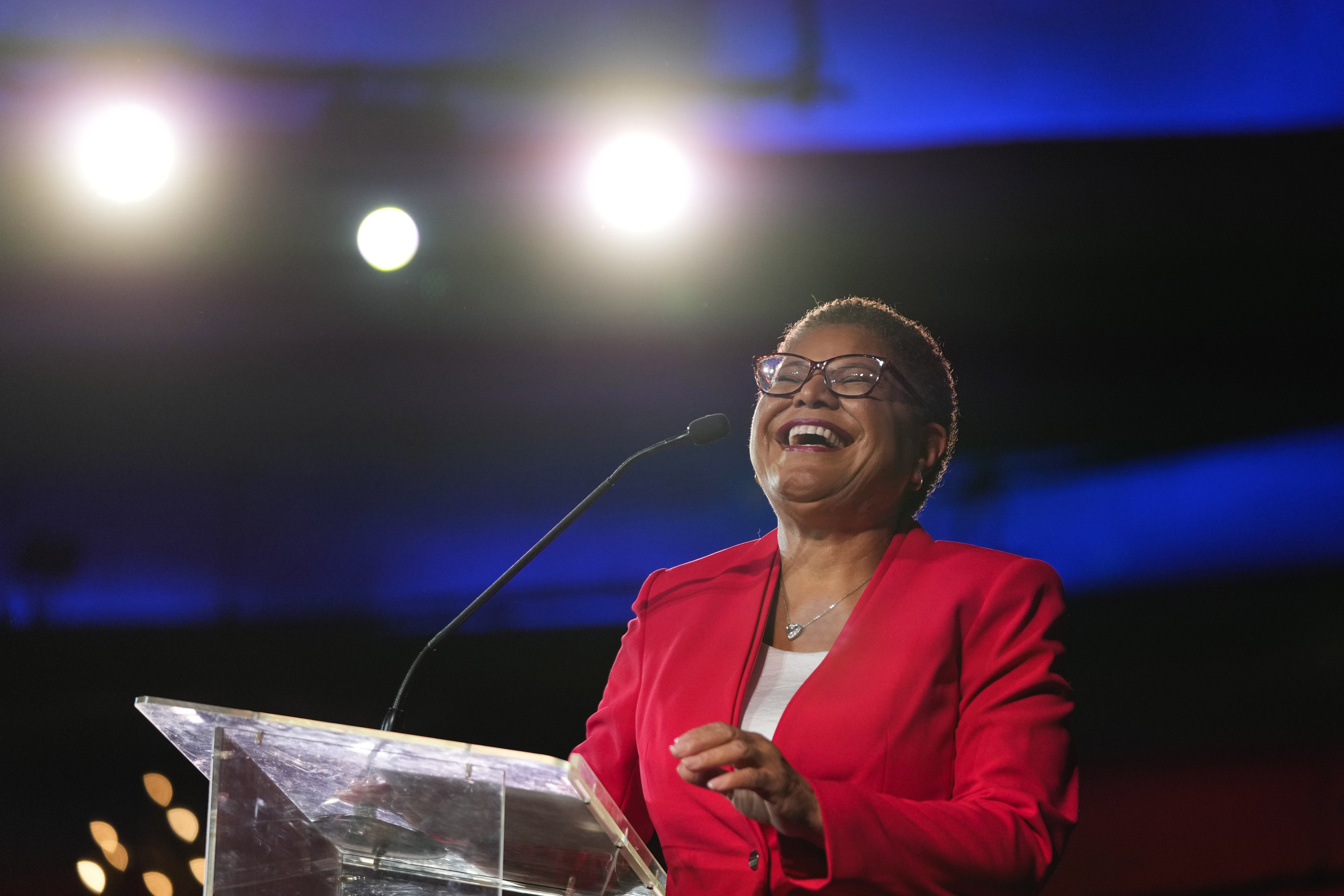 The win represents a political homecoming for Bass, who started her professional life as a community activist fighting poverty and crime in South Los Angeles before embarking on a nearly 20-year political career that took her through the state Legislature and Congress — and landed her on President Joe Biden’s shortlist of vice presidential contenders.

The veteran lawmaker jumped into the race last September and quickly gained widespread backing in the Democratic Party, entering the primary season as the favorite to win. Instead, Bass faced stiff competition through the finish line, as Caruso poured more than $100 million of his personal fortune into the race, dominating the advertising landscape and altering the trajectory of the campaign.

Caruso used that airtime to tout his business experience and political outsider status as key to tackling crime that has spiked in the wake of the coronavirus pandemic. He also highlighted his past as a developer, arguing that he could quickly build enough shelters to get the city’s approximately 69,000 homeless residents off the street.

It was not enough to counter the ability of Bass’ campaign to get votes across the city, drawing on large networks of labor union volunteers to canvas neighborhoods.

Bass will be the second Black person to occupy the mayor’s office, following Tom Bradley, who led the city from 1973 to 1993 and became an icon of both local and national politics, presiding over the modernization of the city, which hosted the 1984 Olympics.

The new mayor must work with the fractured City Council to deal with an acute housing shortage and aging infrastructure that could pose problems as the city prepares to host the 2028 Olympic Games.

Bass will now step into a role considered to be among the most difficult leadership positions in the country. Los Angeles’ homeless population has continued to grow, despite billions in local and state dollars being earmarked in recent years to build more temporary beds and provide mental health services.

Another challenge she will face is what to do about Councilmember Kevin de León, who has refused widespread calls to resign after he was overheard in the secretly recorded conversation that included racist language.

Bass will be expected to lead a racial reconciliation after that tape captured three Latino City Council members and a union leader engaged in a politically-motivated conversation about shaping council districts that included racist and insensitive remarks.

A former physician assistant, Bass became politically active after witnessing the toll of the crack epidemic on Black and Latino communities in the 1980s. She founded the nonprofit Community Coalition in 1990 with the goal of uniting residents in South Los Angeles against poverty and crime.

That background will help Bass guide Los Angeles through its many problems, said former Los Angeles Mayor Antonio Villaraigosa, who helped Bass launch Community Coalition and has known her for nearly 40 years.

“I’ve always believed that an individual best suited to be the next mayor has to be someone who’s engaged in bridging the racial divide, connecting communities and building coalitions,” he said in an interview.

This is not the first time Bass has jumped into a leadership role during a moment of crisis.

As a state assemblymember, Bass was named speaker by her fellow Democrats in 2008, becoming the first Black woman in the nation to lead a state legislative body. She assumed that role months into the Great Recession, as California’s economy cratered and the state faced a $42 billion budget shortfall.

Bass and then-Senate Pro Tem Darrell Steinberg led months of tense negotiations on a budget plan that called for tax increases and drastic cuts to state programs, a proposal that angered lawmakers on both sides of the aisle. They succeeded in getting Republican Gov. Arnold Schwarzenegger and six GOP lawmakers to sign onto the budget, a decision that resulted in Republican legislative leaders being ousted from their positions. That budget is now viewed as having helped the state avert an economic disaster.

Fabian Nuñez, who preceded Bass as speaker and appointed her majority whip, said Bass had a unique ability to work with Republicans and a knack for bringing people together in “an almost shy, quiet way.”

“She didn’t really demand that kind of attention,” Nuñez said, “but through her work, very quietly, [she] was a powerful force and people were drawn to her.”

It was during her time as speaker that Bass’ daughter, Emilia Bass-Lechuga, and her son-in-law were killed in a car accident. Nuñez watched as that tragedy seemed to change Bass.

“It forced her to really only focus on the things that mattered to her life, and not waste time,” he said.

As a congresswoman, Bass became known for her push to overhaul the nation’s foster care system and for co-authoring a legislative package that aimed to reform law enforcement policies in the wake of George Floyd’s murder. That work caught the attention of Biden, who considered her as a running mate before choosing Kamala Harris.

She’ll now enter a very different political environment than what she’s experienced in Congress over the last decade. Bass will have to work with a powerful 15-member City Council that can easily undermine a mayor’s policy goals. She’ll also have to navigate a county Board of Supervisors, an independent school board and dozens of neighboring city governments over which she’ll have no control.

Bass seems set up to have a strong relationship with the City Council. Five sitting members have endorsed her, and a wave of progressive candidates is poised to grab office. Villaraigosa said that while anger in the city is high, Bass and council members have a unique chance to make big changes.

“Crisis does open up an opportunity for the mayor and the council to work together to address the challenges, crime and homelessness, poverty and the lack of housing,” he said. “The next mayor has to be clear that a great city is a city where we’re growing together, and not leaving so many communities behind.”