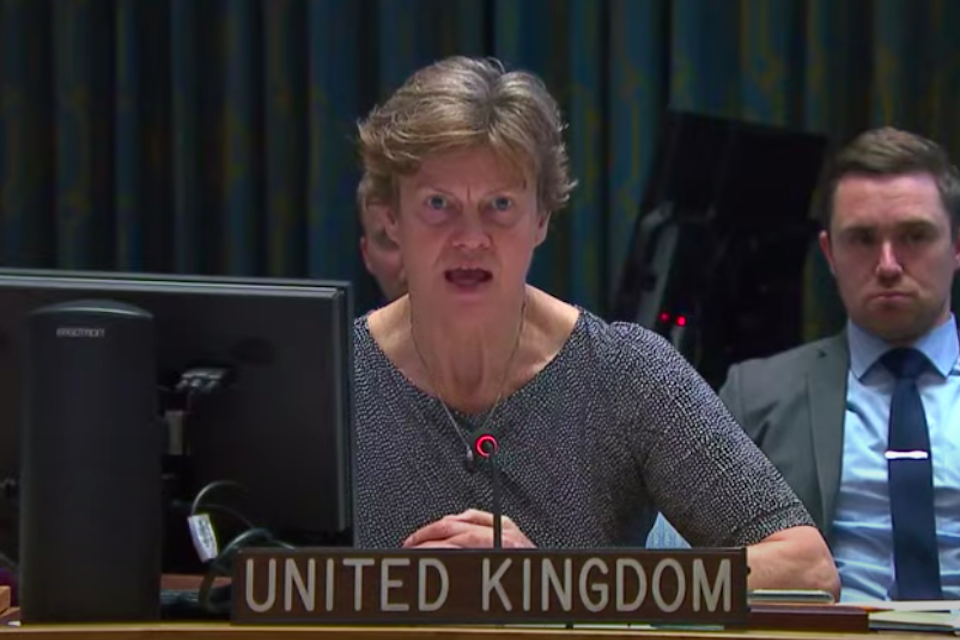 Thank you President. I join others in thanking the Secretary-General, USG Griffiths and Mr Agha for their briefings.

As we’ve heard, the Security Council will soon consider the UN’s mandate to deliver cross-border aid into Syria.

The UK is in no doubt that this Council should take decisions that alleviate humanitarian suffering and contribute to peace and security.

We base our decisions on evidence and the advice of humanitarian actors on the ground working to save lives.

This month, a UK Ministerial delegation visited the Turkish-Syrian border and witnessed the enormous effort that goes into ensuring regular and transparent cross-border humanitarian operations.

As we heard today, the situation in Syria, driven by 11 years of conflict, continues to worsen, with 80% of the population in need of humanitarian assistance.

The call from humanitarians at the border, as well as UN leaders and over 32 NGO leaders this past week, is clear: an end to the mandate would be catastrophic.

· reduced access to services for women and girls, who represent 80% of the North-West population;

· the loss of oversight provided by the UN’s ‘gold standard’ Monitoring Mechanism, which has scrutinised over 56,000 trucks since 2014 and prevented aid from getting into the hands of terrorists;

· and, it would be a devastating hindrance to efforts to tackle COVID-19 in the North-West, where only 5.7% of the population is fully vaccinated.

The closure of previous crossings should serve as a clear warning: needs in the North-East have escalated since the closure of Yaroubiyah.

Across Syria, there have been over 2.9 million indirect beneficiaries of early recovery projects this year, of the sort that Under Secretary-General Griffiths set out and those are backed by $195 million of international funding.

The UK will continue to play its part: we have pledged nearly $200 million in humanitarian support in 2022. This will support ongoing early recovery across all areas of Syria, supporting urban and rural livelihoods, rehabilitation of water networks and quality education for children. But without mandate renewal, early recovery projects in northwest Syria would be compromised.

So I urge Council members to review the evidence and listen to the experts: humanitarian need and regional stability necessitates that resolution 2585 be renewed and expanded.

The UN and humanitarian partners require a minimum 12-month extension in order to continue to expand early recovery programming.

There is no justification for bringing this vital lifeline to an end. As Mr Agha said, there are more than 4 million reasons to renew the cross-border mandate and those are the people who depend on it. We must stand by the people of Syria.