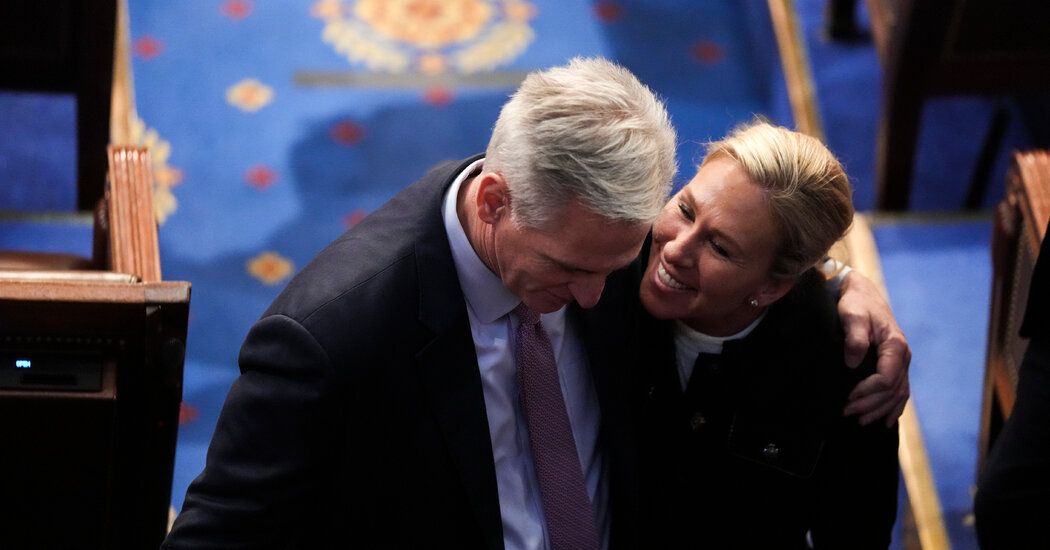 “It’s a snapshot of where the Republican Party is,” said William Kristol, a prominent Never Trump conservative, referring to the makeup of the House Oversight Committee. “It’s wishful thinking to think there is a healthy Republican Party and this wacky Republican conference. They just got elected. Aren’t they the most representative thing of the party that exists?”

The speaker also credits himself with putting people in positions where they can be most successful. He may see a political upside to placing politically motivated firebrands on a committee devoted to investigations that could tarnish Mr. Biden. In 2015, Mr. McCarthy jeopardized his first attempt at becoming speaker by bragging that the House select committee formed to investigate the attack on the American diplomatic mission in Benghazi, Libya, had been successful in damaging Hillary Clinton, the Democratic presidential candidate.

The White House has seized on the elevation of members who have mimicked Mr. Trump’s tactics as the latest example of the Republican Party’s lurch to the extremes.

“Republicans are handing the keys of oversight to the most extreme MAGA members of the Republican caucus who promote violent rhetoric and dangerous conspiracy theories,” Ian Sams, a White House spokesman, said in a statement, referring to Mr. Perry, Ms. Greene, Ms. Boebert and Mr. Gosar. “They have defended and downplayed a violent insurrection against our democracy.”

Mr. Sams added, “House Republican leaders should explain why they are allowing these individuals to serve on this committee and reveal transparently once and for all what secret deals they made to the extreme MAGA members in order to elect a speaker.”

Other new members on the Oversight Committee who have attracted less attention include Representative Russell Fry of South Carolina, who has campaigned with election conspiracy theorists including Mike Lindell, the chief executive of MyPillow; and Representative Anna Paulina Luna of Florida, who has denied the results of the 2020 election and has appeared on a television program that has pushed the QAnon conspiracy theory.