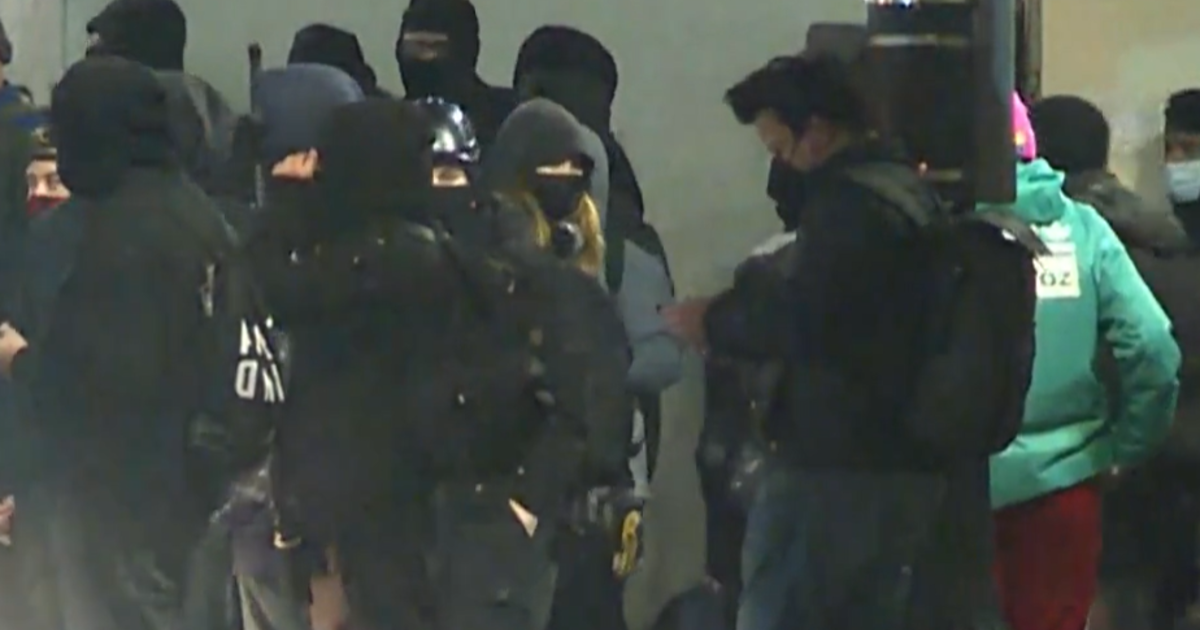 A handful of protest marches were held in cities across the country Friday night over the acquittal of Kyle Rittenhouse, who shot and killed two people at a protest in Kenosha, Wisconsin, last year and injured a third.

The shootings set off another national debate on guns and race, and reactions to the verdict — not guilty of all charges — appear to be even more politically charged.

Police in Portland, Oregon, declared a riot Friday night as a group of about 200 protesters broke windows, threw objects at police and talked about burning down the Justice Center, CBS affiliate KOIN reports.

In New York, hundreds of people marched through Brooklyn carrying signs and chanting as they marched to the Brooklyn Bridge, where they blocked traffic lanes, CBS Chicago reports.

Protesters also marched in downtown Chicago, where a CBS Chicago photographer estimated there were about 60 to 100 protesters.

Outside the city of Kenosha, 500 National Guard troops remain on standby, Nancy Chen reports for “CBS Saturday Morning.” But while there was a small group of demonstrators there last night, there were no signs of unrest.

Rittenhouse was facing five felony counts, including first degree intentional homicide, which carried a life sentence. When the verdict was read in the courtroom Friday, he cried and collapsed onto a table after jurors found the 18-year-old not guilty of all charges following several days — about 26 hours — of deliberations.

Rittenhouse’s attorney, Mark Richards, said his client “wishes none of this would have ever happened.”

The trial garnered attention nationwide. President Biden said he understood the verdict would leave many Americans feeling angry and concerned, including himself.

“I stand by what the jury has concluded,” the president said. “The jury system works, and we have to abide by it.

Jurors believed Rittenhouse’s claims that he acted in self-defense when he killed two men and wounded a third during unrest in Kenosha last year.

“I didn’t do anything wrong. I defended myself,” he said while testifying.

A pivotal point in the trial was the day Rittenhouse took the stand and broke down during questioning.

Prosecutors, meanwhile, tried to portray Rittenhouse as an instigator armed with an AR-15 style weapon who provoked the shootings.

Outside the courthouse on Friday, friends and family members of the men who died said the verdict was unjust.

Susan Hughes, the great aunt of Anthony Huber, who was killed by Rittenhouse, said of the jury’s verdict: “I think they tried. I like the fact that there must have been someone fighting for us, because it wouldn’t have taken them that long.”