An outside group supporting Ron DeSantis is planning to spend $3.3mn over the next six months to boost his national profile, adding to expectations that the Florida governor will challenge Donald Trump for the Republican presidential nomination in 2024.

Ready for Ron, a political action committee backing the Florida governor for the White House, will file a report on Thursday with the Federal Elections Commission disclosing the expected expenditures.

These will include $2.3mn in national television advertisements, at a rate of spending of $100,000 per week until the end of June, as well as about $1mn in independent spending on phone, mail and digital promotion of a DeSantis candidacy.

Ready for Ron is an independent organisation that does not co-ordinate with DeSantis but was set up in May last year by his allies to lay the groundwork for a possible bid. Its chief political strategist is Ed Rollins, a veteran Republican consultant.

DeSantis has faced growing calls to throw his hat in the ring after he cruised to re-election as governor of Florida by nearly 20 points in last November’s midterm elections. But he has so far side-stepped questions about 2024 and said he is focused on the upcoming legislative session in Florida, which ends in May.

In the first days of his second term as governor, DeSantis has said he will push the state legislature to enact a permanent ban on certain coronavirus-related measures, including vaccine and mask requirements in schools and businesses. DeSantis has also doubled down on his commitment to preventing state fund managers from considering environmental, social and governance, or ESG, factors in their investments.

Dan Backer, a lawyer and counsel to Ready for Ron, said the purpose of the ad spending was to create “the backbone of a real ground game” for DeSantis and “convince DeSantis that he has the grassroots support to run and win in a general election”.

He added that Ready for Ron wanted to “bring in a whole host of people who aren’t part of the current universe”, including those who are not part of Trump’s base of conservative voters, which has dominated Republican campaigns in recent years.

The Ready for Ron investments, despite being relatively small, are among the most concrete examples of Republican operatives looking to drum up support for the Florida governor. Politico reported on Wednesday that a senior state legislator from Michigan, an important swing state, flew to Florida to hand deliver a letter to DeSantis encouraging him to run.

Trump announced his third run for president shortly after the midterms, even as many in his own party blamed him for the Republicans’ relative underperformance, especially in US Senate races such as in Pennsylvania.

Trump’s campaign has been off to a slow start, with few public appearances from the former president, who faces several legal probes and has largely stayed out of the limelight at his Mar-a-Lago resort in Palm Beach, Florida. 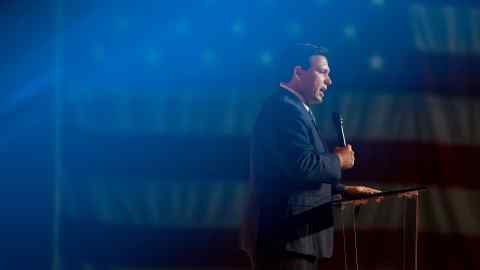 Opinion polls in recent months have shown DeSantis gaining ground against Trump among the Republican grassroots, who will select their nominee in caucuses and primaries in early 2024. But Trump’s fundraising vehicle, the Make America Great Again Pac, was quick to promote a new Morning Consult survey out on Wednesday, which showed Trump had the backing of 48 per cent of potential primary voters, compared to 31 per cent for DeSantis.

Others with single-digit support in the poll included Mike Pence, Trump’s vice-president; Nikki Haley, his UN ambassador; and Mike Pompeo, the former secretary of state.

Backer said he expected DeSantis to launch his candidacy only after the end of the Florida legislative session, and that he would bet on it happening after the Labor Day holiday in early September. He said outside spending should help “offset any competitive advantage that any other campaigns may or may not have” between now and then.

While DeSantis has been gaining traction, doubts still linger about his national appeal, in terms of winning over the base in the primaries and independent voters in the general election.

Ready for Ron’s television campaign will be done through RRTV media, which has been working with Republicans, including pro-Trump groups, since 2018.

Although DeSantis raised more than $217mn in his Florida governor re-election campaign, the most for any gubernatorial candidate, he is not allowed to use those funds directly for a presidential run.

As of November 28 2022, the group had $19,804 of cash on hand and had borrowed around $271,000 from Pac Management Services LLC group, according its latest FEC filings. It would have to raise additional money to fully meet its spending pledges.

The group raised $297,000 between its creation in May of last year and the end of November, including $100,000 from Alabama businessman Shaun McCutcheon as well as smaller donations from former Red Lobster chief executive Kim Lopdrup and David Flory, a backer of DeSantis’s run for governor.

Backer said the group was “confident in the size of our buy as of now”, adding: “More money just means a bigger buy, and I’m very optimistic about the continued trajectory of our fundraising.”

Other possible Republican presidential candidates have amassed significant funds to potentially power a national campaign. In the latest filings at the end of 2022, South Carolina senator Tim Scott has about $39mn across his campaign and affiliated super Pacs.

Haley and Pence have non-profits that raised $8.6mn and $7.6mn, respectively, in 2021, according to the latest tax filings. The non-profit groups are not legally required to disclose their donors.