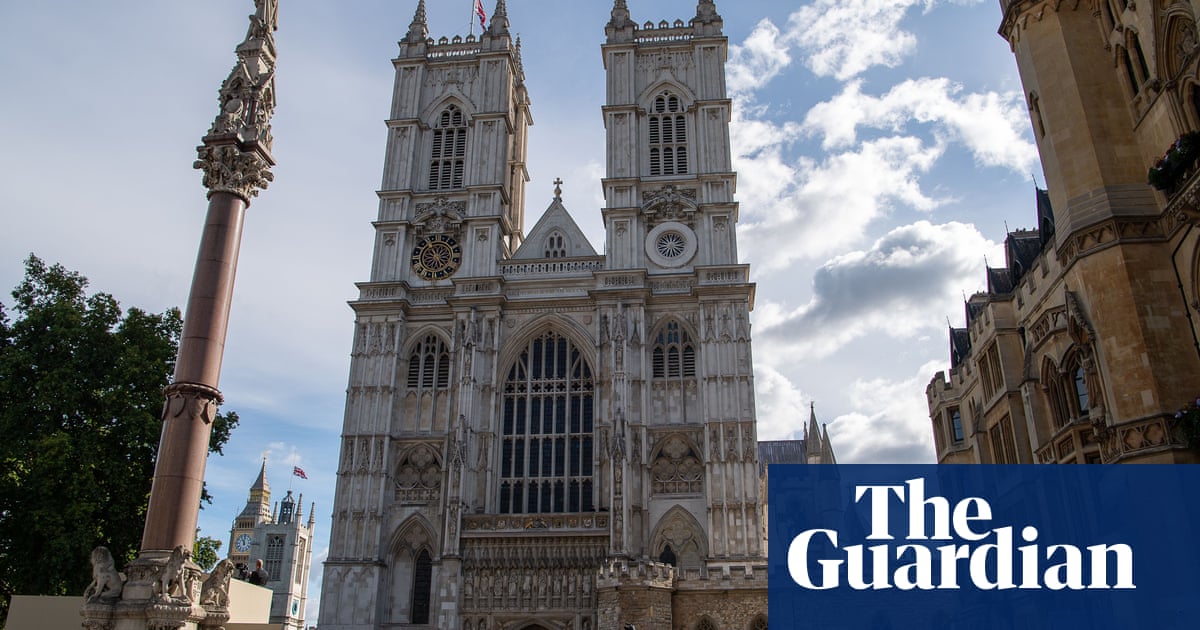 The royal family and the country will say a “last farewell” to Queen Elizabeth II during a state funeral at Westminster Abbey on Monday in which nine-year-old Prince George and his seven-year-old sister, Princess Charlotte, will walk behind their great-grandmother’s coffin.

George and Charlotte, now second and third in line to the throne, will follow their parents, the Prince and Princess of Wales, as the coffin is carried through the abbey in front of a 2,000-strong congregation including world leaders. Police have described the security operation, with more than 10,000 officers on duty, as the biggest in Britain’s history.

The plan emerged when Buckingham Palace released the orders of service for Queen Elizabeth II’s state funeral and committal service at Windsor Castle.

Eighteen members of Queen Elizabeth II’s family, led by the King, and including the Duke and Duchess of Sussex, will be present.

In a statement, the King said he and the Queen Consort had been “moved beyond measure” by those who had paid their respects to the late Queen. “Over the last 10 days, my wife and I have been so deeply touched by the many messages of condolence and support we have received from this country and across the world.”

He added: “As we all prepare to say our last farewell, I wanted simply to take this opportunity to say thank you to all those countless people who have been such a support and comfort to my family and myself in this time of grief.”

The US president, Joe Biden, visited Westminster Hall to pay his respects to the late Queen, attending the lying in state with the first lady, Jill Biden, before an official state reception hosted by the King at Buckingham Palace on Sunday evening for about 500 presidents, prime ministers, royalty and other dignitaries from across the globe who have been invited to attend the state funeral.

On Sunday night a one-minute silence was held across the UK at 8pm.

The Queen’s coffin, surmounted by the imperial state crown, the orb and the sceptre, will be placed before the same altar where she married Prince Philip and where she made her coronation oath.

Both services include some deeply personal touches, about which the Queen was consulted.

At the start of the service, the five Sentences, lines of scripture set to music, will be sung as they have been at every state funeral since the early part of the 18th century. A specially commissioned choral piece, composed by the master of the king’s music, Judith Weir, Like As the Hart, is said to be inspired by “Her Majesty’s unwavering Christian faith”, and is a setting of Psalm 42 to music.

Among the hymns chosen are The Day Thou Gavest, Lord and The Lord Is My Shepherd, I Shall Not Want, which was also sung at the wedding of the then Princess Elizabeth and Lieutenant Philip Mountbatten in 1947, and Love Divine, All Loves Excelling.

A short anthem, O Taste and See How Gracious the Lord Is, was composed by Ralph Vaughan Williams for the Queen’s coronation in 1953.

The Archbishop of Canterbury, Justin Welby, will deliver the sermon. The prime minister, Liz Truss, will read from John 14: 1–9a. And the secretary general of the Commonwealth, Lady Scotland, will read from 1 Corinthians 15: 20-26.

After the Last Post, a two-minute silence and the reveille, the National Anthem will be sung. The service will end with the Queen’s piper, Paul Burns, playing Sleep, Dearie, Sleep. Afterwards, the bells of Westminster Abbey will be rung, fully muffled, as is the tradition following the funeral of the sovereign.

Prince George, who is said to have called his great grandmother “Gan Gan”, and Princess Charlotte are not due to join the procession during the later service of committal at St George’s Chapel, Windsor Castle, which will be attended by 800 people.

The choir will sing The Russian Contakion of the Departed, which was also sung for the funeral of the Duke of Edinburgh. During the service, the dean of Windsor, Dr David Conner, will read Revelation 21, verses 1-7, which was read at the funerals of the Queen’s grandparents, King George V in 1936 and Queen Mary in 1953, as well as at her father’s funeral in 1952.

The dean will pay tribute to the late Queen in the bidding. “Here, in St George’s Chapel, where she so often worshipped, we are bound to call to mind someone whose uncomplicated yet profound Christian faith bore so much fruit,” he will say. “Fruit, in a life of unstinting service to the nation, the commonwealth and the wider world, but also (and especially to be remembered in this place) in kindness, concern and reassuring care for her family and friends and neighbours.

“In the midst of our rapidly changing and frequently troubled world, her calm and dignified presence has given us confidence to face the future, as she did, with courage and with hope.”

During the service, the imperial state crown, orb and sceptre will be removed from the coffin and placed on the high altar. The Queen’s company camp colour is placed on the coffin by the King, having received it from the regimental lieutenant colonel of the Grenadier Guards. The Lord Chamberlain breaks his wand of office, which is then placed upon the coffin.

The coffin is lowered into the royal vault, as the garter king at arms reads aloud Queen Elizabeth II’s styles and titles. The Queen’s piper will play a lament. She will be buried next to the Duke of Edinburgh in the King George VI Memorial Chapel in a private ceremony attended by family later in the evening.

In a televised tribute, recorded before the Queen’s death, the Queen Consort said: “She’s been part of our lives forever.” She added: “It must have been so difficult for her being a solitary woman, and there weren’t women prime minister or women president, she was the only one, so I think she carved her own role.”

Describing the Queen’s sense of humour, Camilla said she recalled going to Windsor on the day she married “when I probably wasn’t firing on all cylinders, quite nervous and, for some unknown reason, I put on a pair of shoes and one had an inch heel and the other had a two-inch heel. So, I mean, talk about hop-a-long and there’s nothing I could do. And, she could see and laughed about it and said: ‘Look I’m terribly sorry,’ and you know she had a good sense of humour.”

She added: “She’s got those wonderful blue eyes and when she smiles, they light up her whole face. I’ll always remember that smile.”

Andrew also paid tribute to his mother, hailing her “knowledge and wisdom infinite, with no boundary or containment”, adding: “I will miss your insights, advice and humour”. In a statement, he described the Queen as “Mummy, Mother, Your Majesty, three in one” and said it had been an “honour and privilege” to serve her.