For 10 long days, they had shared their grief with the world.

But on Monday night, after the public spectacle of a full state funeral, the Royal family was finally able to bury a much-loved mother, grandmother and great-grandmother in private.

Behind closed doors, the King was joined by a small group of the Queen’s closest family for an interment ceremony in the tiny King George VI Memorial Chapel, an annex of the main chapel at Windsor Castle.

There, the Queen was reunited with her beloved husband, the Duke of Edinburgh, who had been waiting for her in the royal vault since his death last April.

The couple were buried together, reunited in death with the late Queen’s father George VI, and the Queen Mother, along with the ashes of her sister, Princess Margaret. 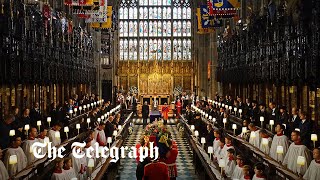 Such was the intimate nature of the ceremony that no details were released.

In contrast with the public grief in which they had willingly shared since the Queen died on September 8, this was the moment they could finally let go. Even palace aides were kept in the dark on the basis that the public moment was over.

The service, conducted by the Dean of Windsor, began at 7.30pm.

The Queen’s body was interred with the Grenadier Guards’ Queen’s Company Camp Colour – a smaller version of the Royal Standard of the Regiment – which the King placed on her coffin at the end of the committal service.

Only one Royal Standard of the Regiment is presented during a monarch’s reign, and it served as the Queen’s Company Colour throughout her time as monarch.

While the private ceremony took place away from the public gaze, small groups continued to pay their personal respects outside.

Standing at the foot of the statue of Queen Victoria, Windsor Castle lit up behind her, Nasreen Hossain, 46, an IT consultant, said the day’s events had been poignant for her following the death of her grandmother from Covid.

“I didn’t know anyone else here today, but we felt like a family coming together to mourn,” she said. “I thought I would stay until the very end because knowing the Queen’s body is being laid to rest alongside her husband’s while we’re out here provides some kind of closure to the day.

“The whole occasion has been beautiful and deserving of her position and standing here now, close to where she is being sent off, is very intimate and moving.”

Fiona Brown, 44, a speech therapist from Maidenhead who struck up an impromptu friendship with Ms Hossain, added: “I don’t really want to go home, it’s been such a moving day. I was in Long Walk from early morning and it’s been incredible.

“When the bands marched past it was very moving. The sound of the drums was something that will stay with me for a long time.”