Things have gone from bad to worse on Oleg’s farm in Kherson in southern Ukraine since Russia’s invasion 10 weeks ago.

Occupying forces took away some of his grain and stole all the machinery, including trucks, low-loaders and jeeps — which his staff have seen in local towns ferrying Russian army personnel and equipment. They commandeered his house and farm buildings.

Oleg — not his real name given the risk of reprisals — doubts whether he will be able to harvest the reduced area of land he has sown this spring. The extra combine harvesters and lorries he normally rents from central Ukraine will be hard, if not impossible, to secure. Two-thirds of his staff have left. Some are afraid of working in the fields when the war is raging nearby. An exploding shell in a sunflower field during the dry summer months could trigger an unstoppable fire.

“I did not count the amount of losses,” said Oleg, adding they were only going to get bigger.

Ukraine’s government has accused Russia of trying to destroy its agriculture sector by stealing valuable grain stocks and machinery, deliberately bombing farms and warehouses and blockading its Black Sea ports to deprive it of exports earnings and farmers of liquidity.

There are multiple examples around the country of grain elevators and warehouses being bombarded. Around Kyiv, Russian forces destroyed distribution centres and warehouses to try to disrupt the provision of food to the capital.

But it is the confiscation of grain in territories controlled by Moscow that is the most emotive issue. It has drawn parallels with the Soviet policy of crop confiscations coupled with the confinement of peasants to their villages in the 1930s. Some 4mn people died in the ensuing famine in Ukraine, known as the Holodomor, or death by starvation.

After Russia bombed a farm business in Luhansk in eastern Ukraine last month, destroying machinery, buildings and 17,000 tonnes of wheat — a year’s supply for 300,000 people — Serhiy Haidai, the local governor, said on social media that Moscow was seeking “to organise the Holodomor in the Luhansk region, that is without a doubt”.

“The most straightforward conclusion from Russia’s exporting grain from Ukraine is [that] their aim [is] to exacerbate the risk of shortages and hunger in the Ukrainian territories under Russian control,” said Vladyslava Magaletska, former head of Ukraine’s state service for food security.

“In addition, Russia may envisage using the stolen grain to blackmail the world, putting global food security at risk.”

The confiscations appear to be on an industrial scale. Agriculture minister Mykola Solsky said Russian authorities had seized between 400,000 and 500,000 tonnes of grain from across the territory it has occupied, taking most of it to Crimea.

“This is big business, organised at the highest levels. Clearly it is done by uniformed agents and the military of the aggressor country,” Solsky said.

Alex Lissitsa, chief executive of IMC, one of Ukraine’s biggest agribusinesses, said grain seizure on this scale must be organised by the Russian authorities because it was not an easy endeavour.

Ukrainian defence intelligence said in a recent statement that a “significant part of the grain stolen from Ukraine is on dry cargo ships under the Russian flag in the Mediterranean. The most likely destination is Syria [an ally of Moscow]. From there, grain can be smuggled to other countries in the Middle East”.

Solsky said Kyiv was seeking western help to try to stop the shipments.

Overall, the Ukrainian government expects 70-80 per cent of farmland to be sown this year despite the problems the war has caused for farmers — from rising prices for fuel and fertilisers to mines and unexploded munitions in their fields and their inability to export stocks of grain by ship.

On Lissitsa’s land in northern Ukraine, the grain elevator was hit by Grad rockets at the beginning of Russia’s invasion but miraculously survived. After Moscow’s forces withdrew from the area his farmers were able to sow, despite the shortage of manpower. “I couldn’t believe a month ago we’d be farming here, but we are,” he said. 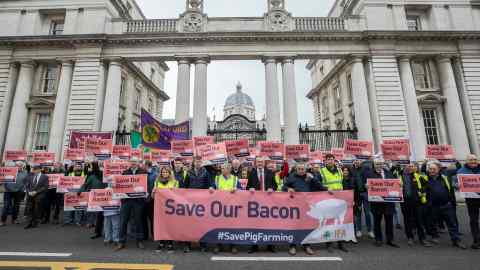 The picture in the occupied territories in eastern and southern Ukraine is bleaker. In some places, farmers have been banned from working in their fields.

Inna Zelena, a Kherson local official who fled when Russia invaded, said some farmers were prevented from growing tall crops, such as corn and sunflowers, which could provide cover for Ukrainian insurgents. She also said local vegetables were being shipped en masse to Crimean stores and markets. Locals in Kherson were meanwhile increasingly reliant on groceries trucked in from the peninsula. “There will be a food crisis,” Zelena predicted.

Kherson farmer Oleg said pro-Kremlin local officials appointed by occupying forces were expropriating entire farm holdings. Some 200 large farm businesses — including many owned by US companies — were being listed for “nationalisation” and would probably be transferred to pro-Russian businessmen from the area, he said.

“Some powerful pro-government farmers have a very big bonus from Russia today,” he added.