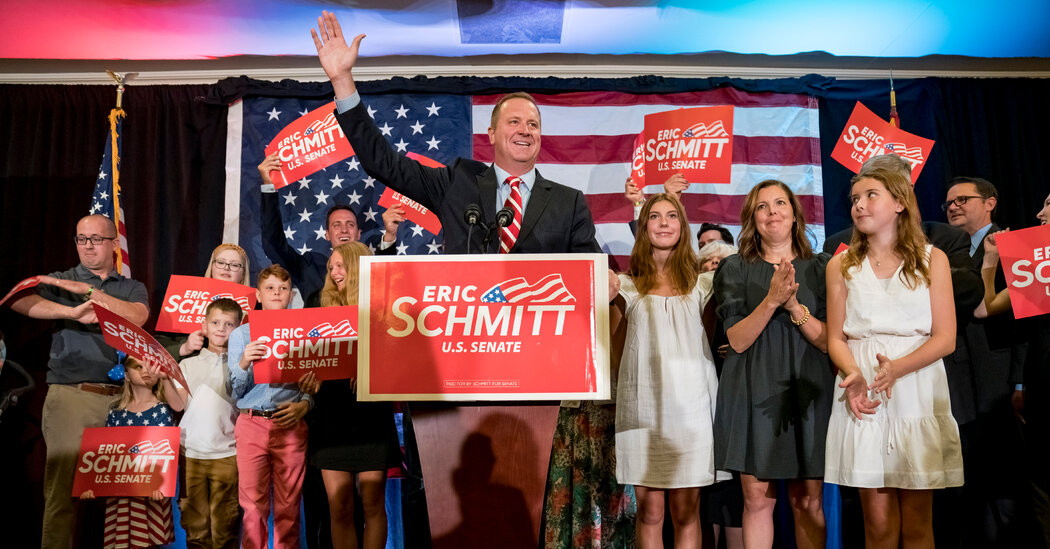 If Mr. Greitens had won, Democrats had planned to attack him on those charges as well as allegations from his former wife that he had physically abused her and one of their young sons as his political career was collapsing.

“I’m hoping and praying that it is God’s will that Eric Greitens does not get the nomination, but if Eric Greitens wins the nomination, we will lose a Senate seat to the Democrats,” Rene Artman, the chairwoman of the St. Louis County Republican Central Committee, said days before the election. She had pleaded with Missouri Republican officials to more forcefully oppose Mr. Greitens.

On the Democratic side, Trudy Busch Valentine, a nurse and heiress of the Anheuser Busch fortune, narrowly defeated Lucas Kunce, a military veteran who had run a populist campaign with the backing of national progressive groups. Mr. Kunce was seen as a strong candidate, but many establishment Democrats were happy to see a late surge by Ms. Valentine, who can self-fund her campaign against Mr. Schmitt in the fall.

Mr. Schmitt benefited from a highly fractured field of Republicans, 21 in all. It included Representative Billy Long, who claimed to be the true voice of Mr. Trump, and Mark McCloskey, a personal injury lawyer who made headlines when he and his wife brandished guns at Black Lives Matter protesters in front of the couple’s St. Louis home.

Ms. Hartzler was backed by Missouri’s junior senator, Josh Hawley, who as attorney general had pursued the investigations that helped destroy Mr. Greitens’s governorship. Mr. Hawley sided with Ms. Hartzler at a time when a female candidate appeared to be best positioned to blunt Mr. Greitens’s rise.

Ms. Hartzler, however, was snubbed by Mr. Trump, who told his supporters on his social media site, “I don’t think she has what it takes to take on the Radical Left Democrats.” Mr. Trump called Mr. Greitens “tough” and “smart” in an interview on the pro-Trump network One America News, and his son Donald Trump Jr. shot automatic rifles with Mr. Greitens at a shooting range and said on camera that they were “striking fear in the hearts of liberals everywhere.”