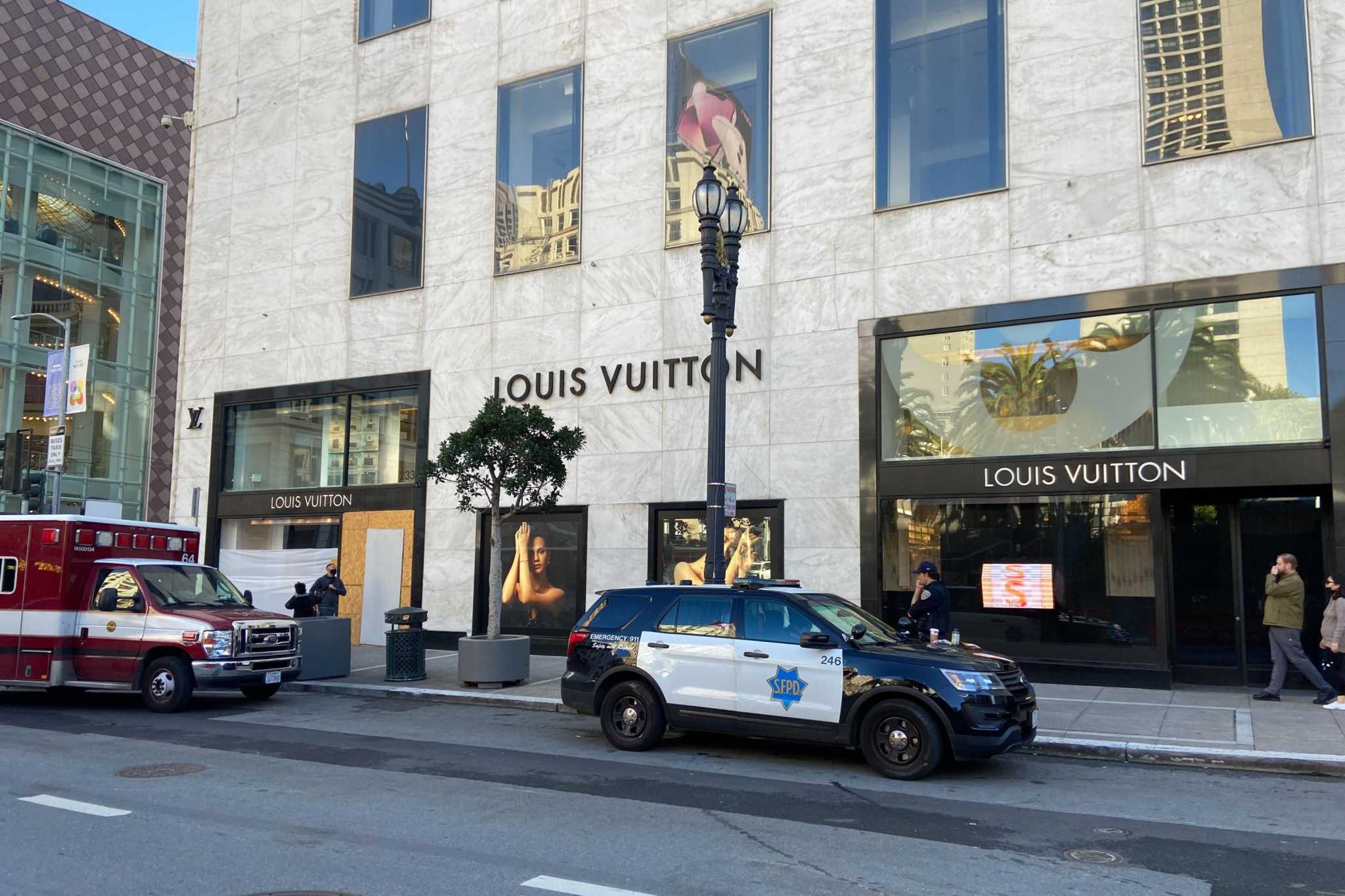 Union Square was in turmoil Friday night, as looters and vandals ransacked high-end retailers including Louis Vuitton and Yves Saint Laurent. Dramatic videos on social media showed masked people running with their arms loaded with goods, followed by a swift police response as officers ran to a car and broke windows with batons while a patrol car raced up to block it from leaving.

The mayhem was a vivid contrast to the night before, when luxury Swiss watchmaker Omega celebrated the opening of its new Union Square boutique with a ritzy event at the de Young Museum, where supermodel Cindy Crawford walked the red carpet with her daughter, Kaia Gerber.

Those two events, on the cusp of the crucial holiday season, encapsulate the hopes and challenges of a storied shopping area that has been devastated by the coronavirus pandemic.

Union Square, the heart of San Francisco’s retail trade, is struggling to emerge from the shutdown’s long shadow, while contending with crime and the negative public perceptions it engenders. Amazon’s increasing dominance, along with a reduction in tourists, office workers and business travelers strolling the sidewalks, doesn’t help either.

City leaders condemned Friday’s crime spree and promised to act swiftly to safeguard the area and bring the perpetrators to justice.

“What you saw last night was horrible,” San Francisco Mayor London Breed said at a news conference Saturday afternoon next to the Macy’s Christmas tree as skaters twirled in the seasonal ice rink and bag-toting shoppers snapped selfies. “We can’t allow that to happen. If you come to our city to commit these types of crimes, you will be held accountable.”

Burglarized stores included Louis Vuitton on Union Square, Burberry and Bloomingdale’s in the Westfield mall, Jins Eyewear on Powell Street, Yves Saint Laurent on Geary and Walgreens on Market Street, said Police Chief Bill Scott, who also spoke at the news conference. Police stopped thefts at Fendi — though the store was still damaged — and Hermès, both on Grant Avenue. Some cannabis dispensaries around the city were also hit, he said.

Police recovered thousands of dollars worth of merchandise, the chief said, but the total amount of damage is still under investigation.

While “confronting armed individuals,” police made eight arrests Friday night — six males and two females — and seized two vehicles and two guns, Scott said. He expects more arrests. All those arrested were young adults, he said, calling the string of crimes a “concerted effort,” but stopping short of calling it organized crime.

Marisa Rodriguez, a former San Francisco prosecutor who is the new executive director of the Union Square Alliance, which represents retailers, hotels and restaurants in the area, said Union Square is already rebounding from the pandemic and will not let retail theft hold it back.

“Union Square is an international symbol of the best of San Francisco,” she said, noting that hundreds of shoppers were out Saturday. “It’s going to stay that way, and the community deserves that.”

While Friday night’s activities came soon after the Kyle Rittenhouse murder trial verdict in Wisconsin, Rodriguez and others said the chaos had nothing to do with protests.

“This was not individuals exercising their First Amendment right to free speech, which is absolutely welcome here in San Francisco,” she said. “This was an organized crime spree. It is not tolerated in Union Square.”

Kirthi Kalyanam, director of the Retail Management Institute at Santa Clara University, predicts that Union Square will weather this storm.

“Flagship retail stores like those in Union Square are extremely important from an image and branding point of view,” he said.

Longer term, Union Square could include uses beyond pure retail, said Supervisor Aaron Peskin, who represents the area. He has sponsored legislation to relax zoning codes, allowing different uses in multistory retail buildings, such as the former sites of Macy’s Men’s Store, which is being converted to multiuse purposes.

“I think the future of Union Square will be a lot more mixed use with residential above and commercial below,” he said.

Kazuko Morgan, vice chair of commercial real estate broker Cushman & Wakefield, said Friday’s crime spree was “pretty devastating, especially at the start of the holiday season,” but she finds optimism in a noticeable rise in leases in the area.

High-end restaurant Chotto Matte will open its first West Coast outpost in an an expansive space on the rooftop of the former Macy’s Men’s Store on Stockton Street. Restaurants Fredericks and Scott’s Chowder House opened in the third quarter.

Bottega Veneta, a maker of upmarket Italian handbags and fashion, is expanding, while jewelry store Brilliant Earth moved to larger space on Grant Avenue. New tenants besides Omega include Saatva, a maker of luxury mattresses and bedding, Morgan said.

And there are more new Union Square tenants coming that haven’t announced yet, Morgan said.

But meanwhile, Union Square’s retail vacancy rate is high — 14.5% in the third quarter, up from 11% a year earlier, according to Cushman & Wakefield. Midscale retailers such as Marshalls, DSW, H&M and Uniqlo have closed, which depresses foot traffic.

Foot traffic reached a million monthly visits in July but tumbled in August and September as the coronavirus delta variant delayed reopenings and travel, the brokerage said. Average monthly foot traffic in the third quarter is still half of pre-pandemic levels, although double last year in the depths of the pandemic.

“The good news is there is activity, with new tenants coming to the market and existing tenants who are expanding,” Morgan said. “The challenge is an increased cost of doing business — you have to have extra security.”

The Police Department is already providing some of that extra security, hiring retired officers to expand its presence. And still more is planned.

Breed said the city will limit car access to Union Square. Video shows that the perpetrators parked cars right outside of stores before breaking in and jumping right back in the cars to flee the scene.

Both Breed and Scott noted that this would probably cause traffic delays, but it’s necessary to keep the area safer. Scott compared it to increased security lines at airports.

Police will deploy officers in public parking lots every day, around the clock, Scott said.

“We are going to flood the area,” Scott said, “and we’re not going to stop at Union Square.”