Small groups of protesters arrived at the Northern Virginia homes of several Supreme Court justices Saturday evening, capping a day of rallies for Roe v. Wade, the 1973 case that granted legal protection for most abortions.

Since a leak of a draft opinion on Dobbs v. Jackson Womens Health, some pro-choice activist groups have encouraged crowds to protest in front of the homes of justices and a few answered the call Saturday evening.

At the homes of Justices Samuel Alito, Amy Coney Barret, Brett Kavanaugh and Chief Justice John Roberts, small clutches of protesters held signs, chanted and marched through the suburban neighborhoods for a few minutes, then left. 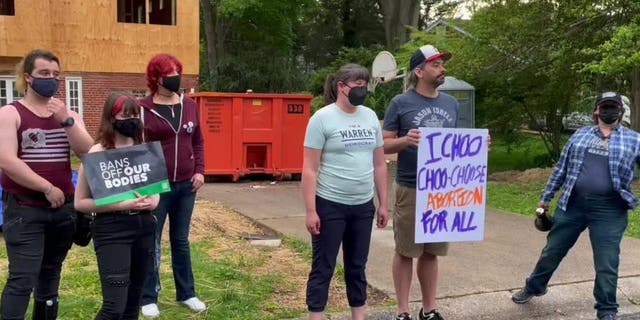 “Alito, we can’t sleep and neither should you!” said a group of six protesters picketing near Alito’s house around 8 p.m.

A draft opinion in the Dobbs v. Jackson Women’s Health Organization was leaked earlier this month, indicating that the Supreme Court has the votes to undo Roe as well as Planned Parenthood v. Casey, another decision that reinforced judicial precedence for abortion access.

The draft opinion, which was confirmed as genuine by the court but does not represent the final decision, effectively would return abortion restrictions to states to decide. 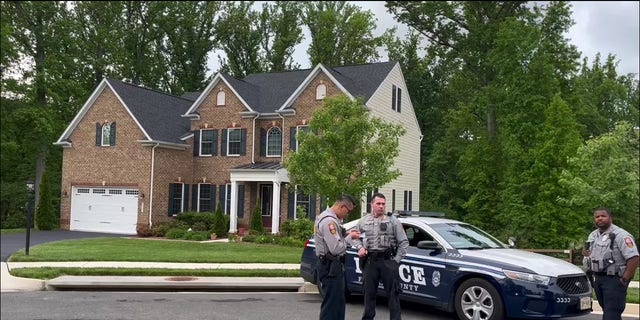 Another group of six protesters marched around a quiet culdesac near Barrett’s home — where several Fairfax County Police officers were standing guard — chanted common protest slogans like “keep abortion safe and legal,” and “our bodies, our lives, our rights to decide.” The group left after about 12 minutes. 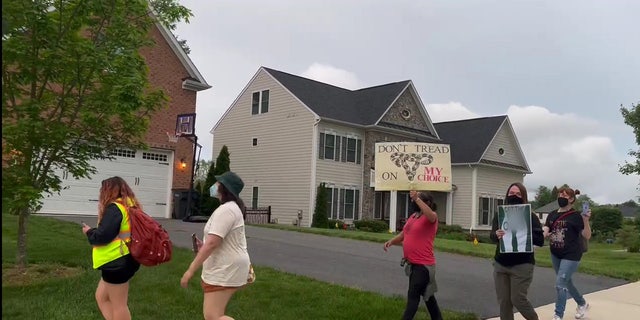 A larger cohort of about a dozen marched to Kavanaugh’s home, and later to nearby Roberts’ residence. “Our rights are not up for debate,” the group chanted, among other slogans, before departing after about 10 minutes.

The quiet picketing followed more than a week of calls to protest in front of the homes of justices who were appointed under Republican presidents.

A group of seven protesters showed up to Barrett’s house clad in the red garb of Margaret Atwood’s “The Handmaid’s Tale,” a feminist dystopian novel and Hulu show that features women being systematically oppressed and raped by men.

Pro-choice protesters marched to the homes of Roberts and Kavanaugh May 7 and held a “Candlelight vigil for Roe v. Wade.”

The Saturday visits to the justices’ homes followed a day of protests nationwide, calling for protections for Roe v Wade.

Over 40 Republicans this week pushed a resolution condemning protests in front of the justices’ houses, pointing to federal law that makes it illegal to “picket or parade” outside a courthouse or a judge’s residence “with the intent of influencing any judge… in the discharge of his duty.” 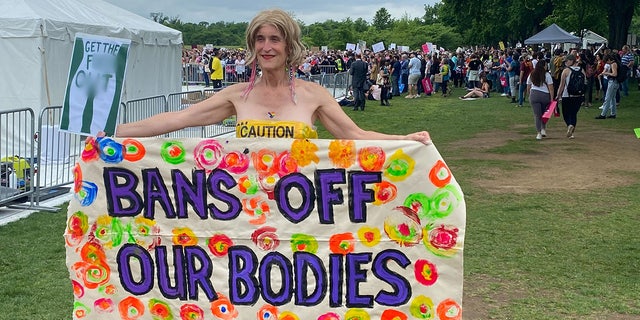 Republicans called for the Department of Justice (DOJ) and Attorney General Merrick Garland to enforce that law all week. Garland and the DOJ were initially silent on the matter but addressed the protests in a statement Wednesday.

“The Attorney General directed the U.S. Marshals Service to help ensure the Justices’ safety by providing additional support to the Marshal of the Supreme Court and Supreme Court Police,” the statement added.