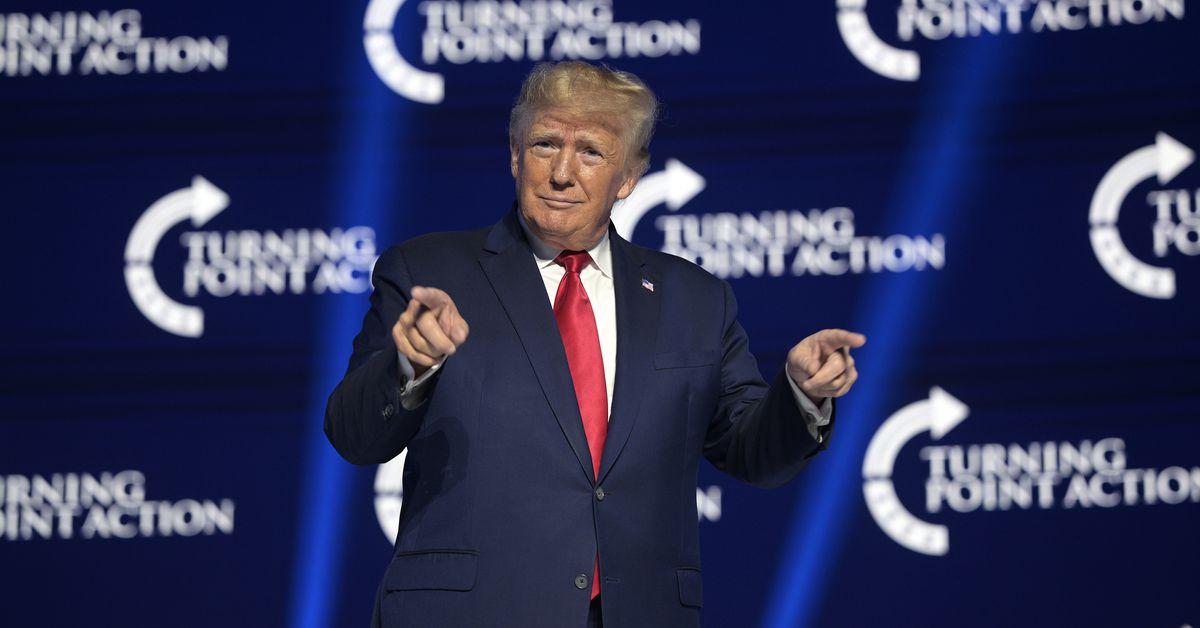 Over the last few weeks, there has been rampant speculation in the American press that former President Donald Trump’s grip on the Republican Party may be slipping — citing, in particular, fallout from the January 6 committee, a seeming rift with the Murdoch media empire, and the rise of Florida Gov. Ron DeSantis as a plausible alternative.

This speculation seems to be influencing the public: Predictit, a political betting market, now gives Trump and DeSantis nearly even odds to be the 2024 Republican presidential nominee.

But there’s more than a whiff of wishful thinking in these reveries, an almost willful forgetting of the many prior times when predictions of Trump’s decline have been proven false. Tuesday’s Republican primary results felt like a rude reminder of reality: In elections across five states, including the swing states of Arizona and Michigan, Trump loyalists won contests up and down the ballot.

It’s a splash of cold water on the narrative of a waning Trump.

“Pundits trying to will into existence a GOP that has moved beyond him are way beyond the facts,” the Atlantic’s Ron Brownstein wrote on Wednesday morning. “This remains a Trump-ified GOP, with most openly embracing him and almost none openly confronting him.”

Brownstein is right. And he’s right for a fundamental reason: Trump’s vision of politics, a war between true Americans and a system that has betrayed them, describes how many Republican voters see the world. And so long as Trump is available, they’re unlikely to opt for any imitations.

The simplest barometer of whether Trump still dominates the party is the 2024 presidential polls. And by that metric, Trump’s grip is pretty hard to question.

The RealClearPolitics poll average has Trump leading the field by an average of 26.2 points. All but one national poll cataloged by FiveThirtyEight in July had Trump beating DeSantis by a similarly large double-digit margin (the sole outlier, from Suffolk University, had Trump ahead by a “mere” 9 points).

Granted, any challenger against an “incumbent” like Trump probably wouldn’t pop up on many voters’ radars this far ahead of an election. But much of the “Trump is slipping” coverage skips past all this vital context. For example, the New York Times recently ran a write-up of its poll with Siena College headlined “Half of G.O.P. Voters Ready to Leave Trump Behind, Poll Finds.” And indeed, the poll did find that 51 percent of Republicans would vote for someone other than Trump if the primary were held today.

Yet the headline is misleading. The Times poll found that Trump still commanded 49 percent support in the party; his next closest rival, DeSantis, garnered a mere 25 percent. In the article, reporter Michael Bender notes that the results show that “Mr. Trump maintains his primacy in the party,” contradicting the piece’s headline.

Much has also been made of the seeming turn against Trump in the Rupert Murdoch media empire. In recent weeks, the Murdoch-owned New York Post and Wall Street Journal both ran editorials blasting Trump for his role in the January 6 Capitol riot. “It’s been more than 100 days since Donald J. Trump was interviewed on Fox News,” the New York Times reported, pointing out that DeSantis seemed to have taken the marquee guest slot that Trump once occupied.

But we’ve been here before. Remember when Fox famously went to war against Trump during the 2016 primaries, culminating in a fight between Trump and Megyn Kelly? We know how that played out.

Murdoch, as the Washington Post media columnist Margaret Sullivan argues, is driven by cold calculation: His properties will dump Trump only if doing so won’t alienate their audience and cost them money. He won’t lead the Republican Party against Trump, despite his reported personal distaste for the man, but will instead follow the direction he’s getting from his readers and viewers. That’s why Fox ultimately aligned with Trump in 2016, stayed with him throughout his presidency, and remains unlikely to truly abandon him absent clear signs that the base has moved on.

And so far, there’s little evidence that they have. The metrics used to suggest that Trump is in eclipse — like a survey finding that only a majority of Republicans (rather than a supermajority) believe the 2020 election was stolen, or DeSantis doing strong fundraising numbers — seem to pale in comparison to more direct measures of his support, such as head-to-head polling and the success of his endorsements in primaries across 2022 contests.

At this point, it would be silly to treat Trump as anything but the party’s leader — and the prohibitive favorite to win the Republican nomination in 2024.

If you read studies of the American conservative movement, Trump’s continued strength should be no surprise. The political strength of the movement never came from its policy ideas. Many of its positions, like tax cuts for the rich and stringent abortion restrictions, have ultimately proven to be extremely unpopular.

Instead, its strength has been rooted in grievance: the bitterness of those who believe that modern America is changing too fast, beyond recognition, turning “traditional” citizens into aliens in their own country.

A charitable observer might call this sentiment nostalgia for a bygone America. A more critical one might call it the venting of reactionary white male rage against a more egalitarian country. But whatever your assessment, it is this politics of cultural grievance that animates the GOP base.

And nobody is better at channeling it than Donald Trump.

The core of Trump’s success has been an ability to tap into the sense of loss — “Make American Great Again” — and direct that anger against the traditional GOP elite, Democrats, minorities, and even the US electoral system itself. His celebrity and charisma — two traits DeSantis lacks — have allowed him to build an unparalleled personal bond with this segment of the electorate.

And it is this connection that, again and again, has proven predictions of Trump’s decline to be premature.

There have been many such predictions. From practically the moment he glided down Trump Tower’s golden escalators to launch his campaign, pundits have been identifying events that they thought would break him: the crass insults thrown at John McCain in 2015, the Access Hollywood tape in 2016, the “very fine people” Charlottesville comment in 2017, the Democratic midterm wave in 2018, the Mueller investigation and report in 2019, the botched coronavirus response in 2020, the January 6 attack in 2021. Each time, observers predicted that it was the beginning of the end for Trump — that his supporters or the Republican leadership would abandon him, leading to the destruction of his political career.

Yet despite such setbacks, Trump has maintained his grip on the party. When faced with the most undeniable setback of all, his defeat in the 2020 election, he simply chose to lie and say he won — and Republicans decided, by overwhelming margins, to believe him. He incited an honest-to-goodness riot at the Capitol, and his supporters still see him as the patriot par excellence.

The broad coalition of people who oppose Trump’s assault on American democracy — Democrats, independents, Never Trump Republicans — need to disabuse themselves of the naïve idea that elite conservatives, especially the Republican leadership and Fox News C-suite, will somehow end the threat. At this point, it’s not clear they really want to — and that they might not be able to even if they tried.

There is a demand-side problem in American politics that many have chosen not to really grapple with. Trump may have lost in 2020, but his 74 million popular votes is the second-most in American history (Biden’s 81 million is No. 1). That 74 million is 10 million more than he got in 2016. Millions of people who didn’t vote for Trump in 2016 saw what he put the country through in four years and said, “I’d like more of that, please.”

That alone is enough to give Republican elites pause about abandoning him. And when you narrow the aperture to internal Republican dynamics, the picture is even more dire: The party’s base and activist grassroots are dominated by dyed-in-the-wool Trumpists, the sort of people that just bounced Meijer out of office. Republicans who turn on him, even ones as influential and well-pedigreed as Rep. Liz Cheney, risk total marginalization inside the party.

It’s not impossible that Trump’s numbers slide permanently and that he is ultimately supplanted by DeSantis or some similar figure. But all of our experience with the Trump phenomenon suggests that this is implausible at best — and, even if it happens, it will be less a defenestration of Trump and more that somebody else figures out some way to take up his mantle without outright rejecting him.

“‘Trump’s grip on the GOP is slipping’ discourse misses the point entirely,” writes Sarah Longwell, a pollster and prominent Never Trump conservative. “Trump the man can lose altitude, but the forces he unleashed have overtaken the whole party. Trump can go away, but a GOP full of cranks and conspiracists will be his enduring legacy.”

But it is for this reason that Trump the man is unlikely to slip. As of right now, nobody has figured out how to direct “the forces he unleashed” as effectively as he has: His personality is a key part of the Trump phenomenon.

Fox News knows this, Senate Minority Leader Mitch McConnell knows this, and the GOP establishment knows this. They may signal their hesitation, they may hedge here and there. But they know it’s Trump’s party still. As long Trump is breathing, there’s unlikely to be a Trumpism without him.