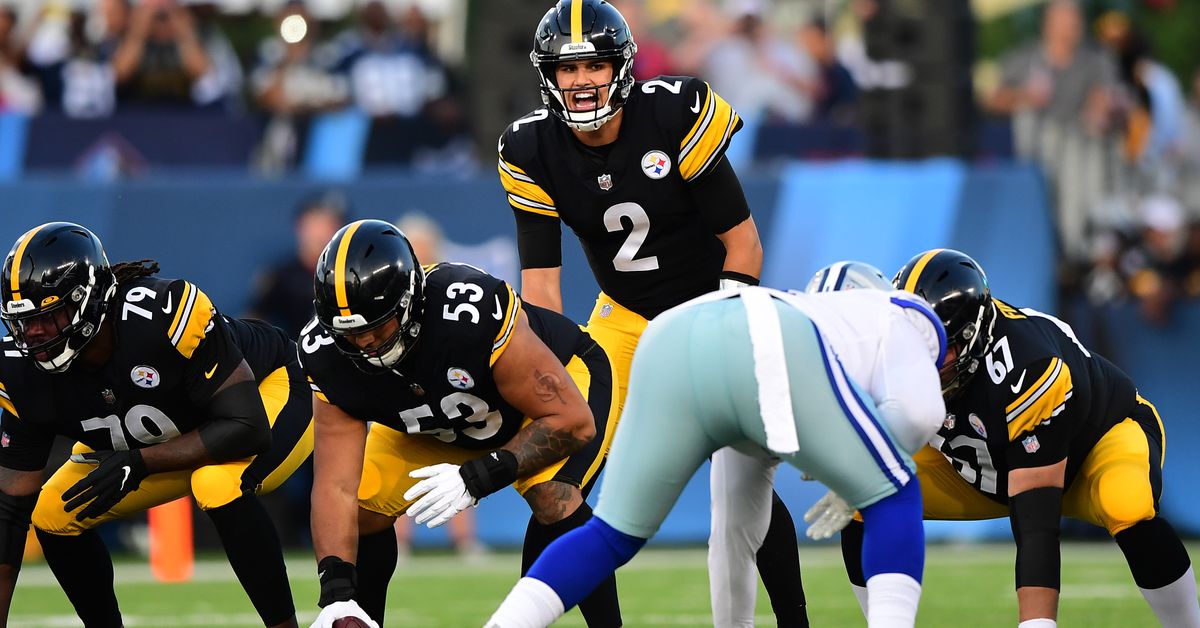 It had been since 2019 the National Football League had a preseason game. In 2021, with the official preseason cut from four to three games, the Dallas Cowboys and Pittsburgh Steelers stayed with four exhibition games. That fourth game was the annual Hall of Fame game which takes place in Canton, OH to kickoff the preseason.

With both teams brimming with potential, their veterans were nothing but onlookers Thursday night, but that didn’t mean there weren’t players fighting for their professional lives.

The Steelers received the football to start the game, and that meant the offense took the field, even though Ben Roethlisberger and several others were watching instead of playing. With Mason Rudolph under center, the Steelers had a balanced approach which took them into Dallas territory. But after several Najee Harris runs, and a Chase Claypool third down reception, Rudolph’s handoff to Claypool on an end around was fumbled and recovered by Dallas.

With a short field, the Cowboys’ offense was able to create push along the offensive line, and it eventually put them in a first and goal situation. However, the Pittsburgh pass rush, mainly Alex Highsmith, stalled the drive and forced a 29 yard field goal.

The Steelers’ ensuing drive saw the Steelers pick up a first down with a Harris run, but a third down pass sailed right through Chase Claypool’s hands resulting in Pressley Harvin’s first action as a professional.

Dallas took over at their own 10-yard line to start the second quarter, and they drove methodically down the field into the red-zone. Facing another third and goal, Cassius Marsh was able to get free and create a strip sack. The field goal attempt was blocked, giving the Steelers their third offensive possession of the game.

The Steelers had their first big play of the game with a 45-yard completion from Mason Rudolph to Chase Claypool, but the drive stalled at the 30 yard line.

This forced a 49 yard field goal attempt by Sam Sloman which was missed badly.

With another short field, Dallas was facing a 4th and 15. It looked as if they had converted the play, but Justin Layne was able to strip the ball and Antoine Brooks Jr. recovered the ball.

The Steelers took over at their own 35 yard line, and Dwayne Haskins took over at quarterback for Pittsburgh. After a quick first down, the drive stalled. The good news was rookie punter Pressley Harvin was able to pin Dallas at their own one-yard line.

However, the Steelers’ defense was unable to stop the run, and allowed Dallas to take valuable time off the clock. A roughing the passer call on Isaiah Buggs on third down extended the drive and gave the Cowboys new life. The Cowboys did attempt a 52-yard field goal at the end of the half, and it was missed badly.

Dallas took a 3-0 lead into halftime.

The Cowboys received the ball to start the second half, and with Ben Dinucci at quarterback Dallas was unable to gain a first down. On the ensuing punt Matthew Sexton nearly returned the punt for a touchdown.

Right on cue, however, Sam Sloman missed another kick, giving the Steelers a 6-3 lead.

It didn’t take long for the Steelers to get the ball back after a pass sailed on Dinucci and was intercepted by Donovan Steiner. The Steelers were able to turn the takeaway into points, but not a touchdown. Instead, they settled for a Sloman field goal making the score 9-3.

Heading into the fourth quarter the 9-3 score stood, and after both teams exchanged possessions it was the Steelers who struck next. With Josh Dobbs at quarterback the Steelers ran the ball into a first and goal situation. On 3rd down Dobbs hit Tyler Simmons for the Steelers’ second touchdown of the game.

After Sloman nailed the extra point, the Steelers had a 16-3 lead with 8:44 left in regulation.

After a muffed punt return, the Cowboys gave the ball right back to Dobbs and the Steelers’ offense. Despite finding themselves in a first and goal situation, the Steelers failed on 4th down and gave the ball back to Dallas inside two minutes remaining. When the dust settled, the score remained 16-3, in favor of the Steelers.

The win marks the Steelers first win during this preseason, and they now prepare for another Thursday game when they travel to play the Philadelphia Eagles in Week 1 of the NFL preseason. Be sure to stay tuned to BTSC for the latest news and notes surrounding the Steelers as they prepare for the 2021 regular season.