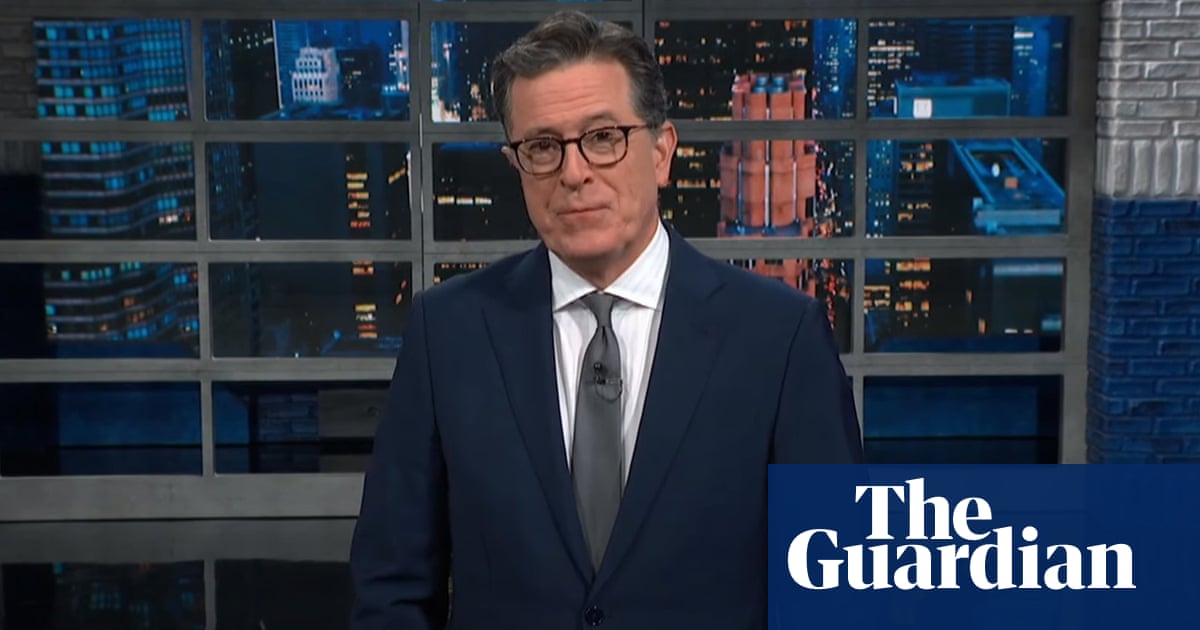 On The Late Show, Stephen Colbert said that this season on top of the regular seasonal cold, he is suffering from World Cup fever, “symptoms include a little ache-y and getting excited about scoreless ties”.

He referred to the host nation Qatar as “a desert country with an oppressive regime and a terrible human rights record” where homosexuality is illegal, in other words “it’s like if Ron Desantis had oil”.

To protest this, seven countries saw their captains trying to wear rainbow armbands that said one love. In response, Fifa said it would give a yellow card to anyone doing this as well as ordering Belgium to remove the word love from their shirts.

This week also saw the Iranian team stay silent during the national anthem to protest the country’s violent and misogynist regime. Colbert said it was “incredibly brave or they forgot the words”.

After years of attempts, we may finally get to see Donald Trump’s taxes after the supreme court voted against another attempt to suppress them, a case that has been going on since 2019, a year when “N95 was just a bingo number” and “Pete Davidson was dating Kate Beckinsale”.

This Thanksgiving has been renamed “danksgiving” by some as so many states have now legalised weed but Colbert warned that it “could be a gateway to harder holidays like Crackmas, Rosh Hashanah and St Patrick’s Day”.

The first licences for recreational marijuana have also finally been produced in New York. “New Yorkers are gonna be so excited to finally try marijuana,” Colbert joked.

On Late Night, Seth Meyers spoke about Joe Biden’s annual turkey pardoning quoting a joke he made: “The only red wave this season would be if his dog knocked over the cranberry sauce.”

He responded with a groan: “Too bad his dog didn’t have the presence of mind to knock over the microphone.”

Meyers also added that it “would be the slowest wave ever” before revealing the true meaning of Thanksgiving: “Getting high with your weird cousins when things get too tense inside.”

Biden has said that he will make a decision about running for 2024 in the month between Thanksgiving and Christmas.

“Whatever you think of him, it’s impressive that an 80-year-old man is planning that far ahead,” he said. “If I was 80 I don’t think I’d plan on bingeing a show that had more than one season.”

Maxwell Frost, the first Gen Z member of Congress, has said that he believes that Biden does adequately represent the values of his generation. Meyers agreed as he “also knows what it’s like to live in a house you’ll never own”.

On Jimmy Kimmel Live!, the host also spoke about Trump’s taxes. “We may actually finally maybe get to see what Darth Tax Evader has been hiding from us,” he joked.

This week also saw a report that Trump’s team is requesting that the FBI return personal items that were seized from Mar-a-Lago, including golf shirts and multiple pictures of Celine Dion. “Is it possible he’s even weirder than we thought he was?” Kimmel asked

Trump is also reportedly “pissed” that Republicans don’t want him to help the controversial Georgian candidate Herschel Walker as he prepares for a runoff as it could hurt his chances.

“Herschel Walker doesn’t need Donald Trump out there to make him look bad, he’s doing a very good job of that himself,” he joked.

This week also saw the annual arrival of the Christmas tree to the White House, “a presidential tradition since Joe Biden was a teenager in 1889”.