The office of Sen. Susan Collins, R-Maine, said Tuesday it has been asked to contact police if there is any activity outside her home because she has received “threatening letters and phone calls” in the past after a message urging her to codify Roe v. Wade was written in chalk outside her home.

She reported the message to police, but it was determined not to be a crime because it wasn’t threatening.

The message said “Mainers Want WHPA. Clean up your mess,” referring to the Women’s Health Protection Act. Other messages were left outside her home that weren’t reported to police.

The writing was eventually washed away by a public works crew. 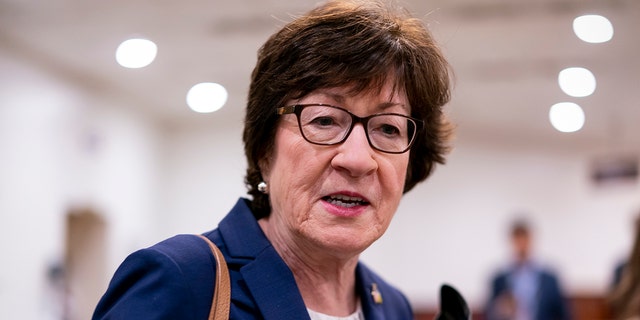 Sen. Susan Collins, R-Maine, speaks to reporters amid the fallout from a leaked draft Supreme Court opinion that could overturn the landmark Roe v. Wade ruling, at the Capitol in Washington, Wednesday, May 4, 2022.  (AP Photo/J. Scott Applewhite)

The message came as pro-choice protesters have marched outside the homes of various politicians and U.S. Supreme Court justices in the wake of a leaked draft opinion that would overturn Roe. The decision established a constitutional right to an abortion nationwide.

“Because Senator Collins periodically gets threatening letters and phone calls, we have been advised by Capitol Police to notify the local police department when there is activity directed around her home,” her office said Tuesday.

Collins has been criticized by Democrats for not supporting the Women’s Health Protection Act and for voting for Justices Brett Kavanaugh and Neil Gorsuch.

The senator said both justices were “completely inconsistent” in what they said when they met with her before their confirmation hearings regarding whether they would support overturning Roe.

“I support the abortion rights established by Roe v. Wade and affirmed by Planned Parenthood v. Casey,” Collins said in late February. “Our legislation would enshrine these important protections into law without undercutting statutes that have been in place for decades and provide basic conscience protections that are relied upon by health care providers who have religious objections to performing abortions.”

Collins’ office included two examples of recent threats she had received in the statement: a letter that claimed the “angel of death” would “visit” her house soon and a voicemail in which a man said he would “kill” her if she voted a certain way.

The letter, which was titled “Behold the word of the Lord,” said, “The angel of death is about to visit your house, for you have given yourself to the other side, just like so many others for money and power.”

It continued, “You will pay a high price for your treasonous acts against this nation. You thought you would get by with selling this country off to the highest bidder along with all who are with you, and that’s the farthest thing from the truth. All of you will pay for the damage you have caused against MY nation, the United States of America, and Israel.”

The letter concluded, “You are a traitor, Susan, and you will reap what you have sown in this hour of judgment, saith the Lord of Hosts.” 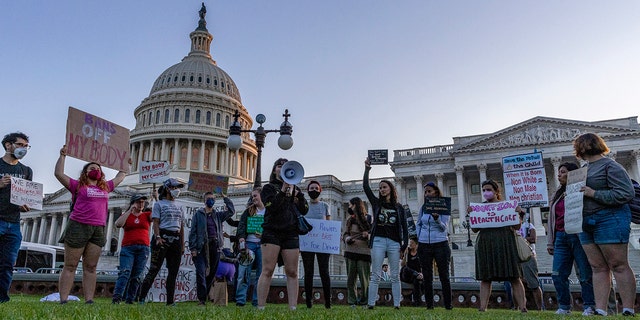 WASHINGTON, DC – MAY 10:  Abortion-rights demonstrators protest in front of the U.S. Supreme Court building on May 10, 2022 in Washington, DC. Senate Democrats plan take up a bill May 11 that would codify abortion rights in federal law, but it is all but certain to come up short of the 60 votes needed to overcome a Republican fillibuster.  (Photo by Tasos Katopodis/Getty Images) (Photo by Tasos Katopodis/Getty Images)

In a separate voice mail, a man told Collins “You vote for that f—–g Black b—h I’ll kill you!”

Collins office didn’t say when the messages were sent to her, but the voicemail may have referred to Ketanji Brown Jackson, the first Black woman to be confirmed to the Supreme Court last month. Collins voted for her.

In 2018, a letter that claimed to contain ricin led to a full biohazard response by first responders at her home.

A woman was sentenced to 30 months in prison for mailing a white powder to Collins and claiming it was anthrax in a separate incident. That letter was intercepted before it reached her home.