The Taliban have seized the city of Taloquan in northeastern Afghanistan, marking the fifth provincial capital to fall under their control in just a matter of days, a local journalist confirmed to CNN on Monday.

Taloquan, the capital of Takhar Province, is the latest in a string of victories that come as foreign forces, led by the United States, complete their withdrawal from Afghanistan.

The insurgents then seized Kunduz, a strategically important provincial capital in northern Afghanistan, on Sunday – making it the first major city to fall to the Taliban since it began its offensive in May. With a population of 375,000, Kunduz is a significant military prize. 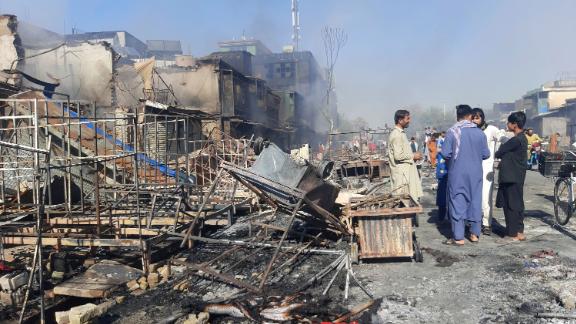 The country’s swift descent into violence has shocked many. In the first six months of this year alone, the Red Cross has helped provide treatment for more than 49,500 people injured in conflict nationwide, as fighting escalates around the country and as many flee in search of safety. There are fears even the national capital, Kabul, could fall.

In the past week, the US has increased airstrikes against Taliban positions in a bid to halt their advances. The Taliban has accused the US of bombing a hospital and a high school, along with other civilian targets in Helmand Province. CNN could not independently verify their claims.

“US forces have conducted several airstrikes in defense of our Afghan partners in recent days,” Maj. Nicole Ferrara, a US Central Command spokesperson, told CNN on Sunday, sidestepping a question about the targets of the strikes.

On Sunday evening, Muhammad Naeem Wardak, the spokesman for the Taliban’s political bureau, warned the US against further intervention in Afghanistan.

“The Afghani government is the one who chose to start the war in different provinces,” Wardak said. “The measures that (the) Taliban took were in response and reaction to the government attacks and actions.”

The US Embassy in Kabul has criticized the Taliban’s offensive on Afghan cities, saying on Sunday its actions to “forcibly impose its rule are unacceptable and contradict its claim to support a negotiated settlement in the Doha peace process.”

“They demonstrate wanton disregard for the welfare and rights of civilians and will worsen this country’s humanitarian crisis,” said the embassy.