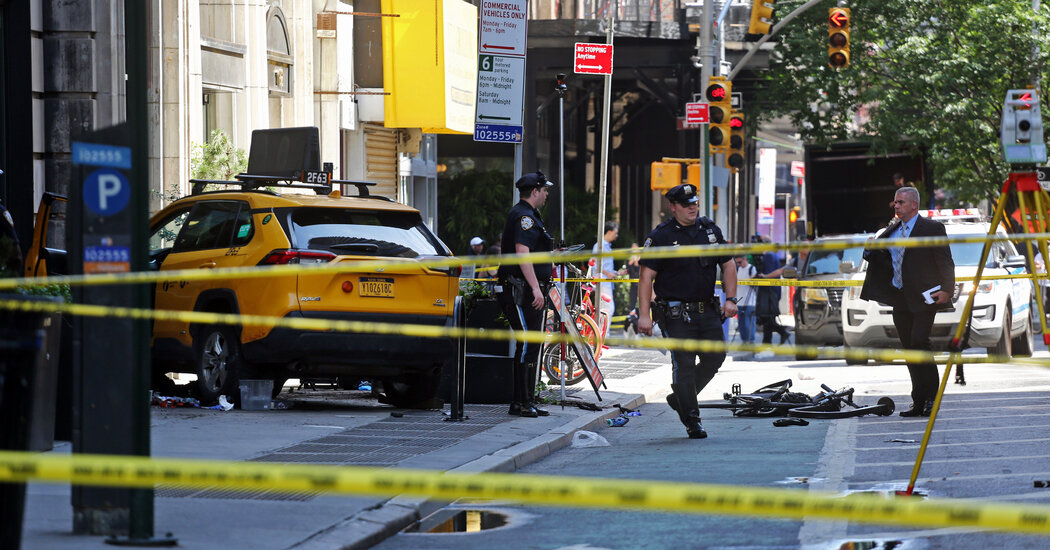 Three people were in critical condition on Monday afternoon after a taxi jumped the sidewalk in Manhattan’s Flatiron district. The driver hit a cyclist and several pedestrians with his vehicle, the authorities said.

Around 1 p.m., according to the Fire Department, the taxi crashed into a building near 29th Street and Broadway, an area packed with bars, restaurants and hotels. Police officials were investigating the cause of the collision, which they believe for now to be an accident.

As the driver turned left onto Broadway, the police said, his cab hit a cyclist and veered onto the sidewalk. The vehicle then accelerated and pushed two women against a wall.

Mamadou Barry, 40, was among the pedestrians who watched the collision unfold. He said that the cyclist remained conscious, but with his arm twisted in an unnatural way.

Mr. Barry joined more than a dozen other bystanders to move the cab away to free a victim who had been crushed. As pedestrians screamed, Mr. Barry looked away, not wanting to see the extent of the injuries. “It was scary,” he said.

Deputy Chief John Chell of the Police Department said at a news conference that “a remarkable scene took place: About 15 to 20 New Yorkers attempted to pick this cab off these women.”

Mohammad Khan, the owner of a perfume shop in the neighborhood, said he hurried to the site of the crash after hearing a commotion from his store, arriving to find the victims with gory injuries. Bystanders were offering them water and comforting them as they waited for ambulances to arrive, he said.

The Police Department was investigating whether the accident was caused by the driver having experienced a “medical episode,” a spokesman said earlier on Monday.

At least six people were injured and taken to the hospital, including the taxi driver, according to the authorities. Three had life-threatening injuries.

The cab was still on the scene about 3 p.m., near a juice store and a dessert shop. The driver’s door was open, next to a bicycle in the green bike lane.

The crash comes amid a startling rise in traffic deaths during the pandemic in the city and across the country.

In New York City, crashes killed 59 people during the first three months of this year, according to data from Transportation Alternatives, a bicycle and pedestrian advocacy group. It has been the deadliest start to the year since 2014, when then-Mayor Bill de Blasio announced his Vision Zero traffic safety program that aimed to eliminate traffic deaths by 2024.

Car ownership in the city also jumped during the pandemic, as more people avoided public transit. A recent weekend in June had about 60 percent of the subway ridership of a comparable weekend prepandemic, according to data from the Metropolitan Transportation Authority.

Mayor Eric Adams recently announced a $904 million investment in safer streets over the next five years, money that would help for amenities like more protected bike lanes and pedestrian-only spaces. He has also said police officials will increase enforcement of traffic laws.