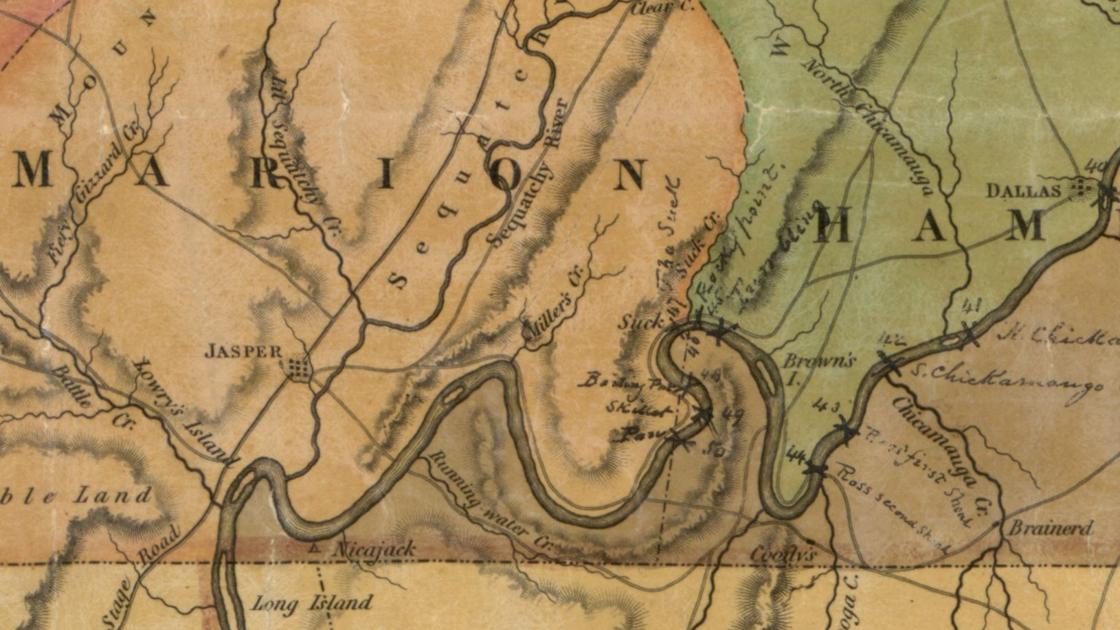 Information is easy to come by these days. If we want to contact someone, we call or text them. If we want to research something, we look it up on the internet. If we want to know our latitude and longitude, we buy a satellite navigation device.

It hasn’t always been this way, which is why Tennessee’s border with Georgia is slightly off.

When Congress voted to make Tennessee a state in 1796, it set 35 degrees north as its boundary with Georgia. At the time, this line between Tennessee and Georgia was in Cherokee Indian Territory (much of it occupied by warlike Chickamaugans). No one volunteered to survey the border.

It wasn’t until 1818 that Georgia and Tennessee decided it was time to map out their common boundary. Each state appointed a three-person team to get together and find the border as far west as the new Alabama border.

The border was laid out in the following manner: First, mathematicians determined the location of the 35th parallel using a hand-held sextant, which required precise calculations of the elevation above the horizon of certain pre-determined stars. The surveying parties started at the site of the Chickamaugan village of Nickajack. From there, they moved east, using a magnetic compass to create the border and conducting astronomical shots with the sextant here and there.

It sounds simple. But if you think this is easy, then apparently you’ve never tried it yourself.

Navigating by use of a sextant is hard, as I learned when I flew in the U.S. Navy. If the sextant isn’t perfect, your calculation won’t be perfect. If you make a single mistake in reading your instrument, you will be way off. If your nautical almanac has a single mistake in it, then your conclusion will be wrong.

It should also be pointed out that the terrain near the Georgia-Tennessee border is not flat. It’s treacherous, steep and lies beside a river, which is why the Chickamaugans were there in the first place.

Bart Crattie, a surveyor who has done extensive research into this topic, has discovered another reason their calculations might have been slightly off: bad equipment. A few weeks before setting out for the surveying trip, one of the surveyors wrote the governor of Georgia and asked him (futilely, it turned out) for better surveying devices.

We now know that the surveying party made a mistake. Rather than place the border at 35 degrees north, they put the border at about 34 degrees and 59 minutes north (about a mile off). Had they placed the border where it should have gone, the edge of the Tennessee River would have dipped into Georgia. But, instead, the state line of Georgia missed the river by a few hundred feet.

There are some important places in Tennessee that would have been in Georgia had it not been for this error. Parts of Chattanooga were laid out on what should have been Georgia’s land.

No one knows when it first became apparent that the border was in the wrong place. But starting in 1887, the Georgia legislature began raising the border dispute in the form of resolutions, and has done so about every 20 years since that time.

There is no precedent for moving a state line that was mistakenly put in the wrong place. Under the legal term known as “acquiescence,” if a person or government puts up with something for long enough, they forfeit the right to take legal action about it later. Also, there are state borders all over the country that are slightly off. I suspect none of them will ever be moved.

Nevertheless, the government of the state of Georgia retains the right to continue to complain about this, and I’m sure they’ll continue to do so.