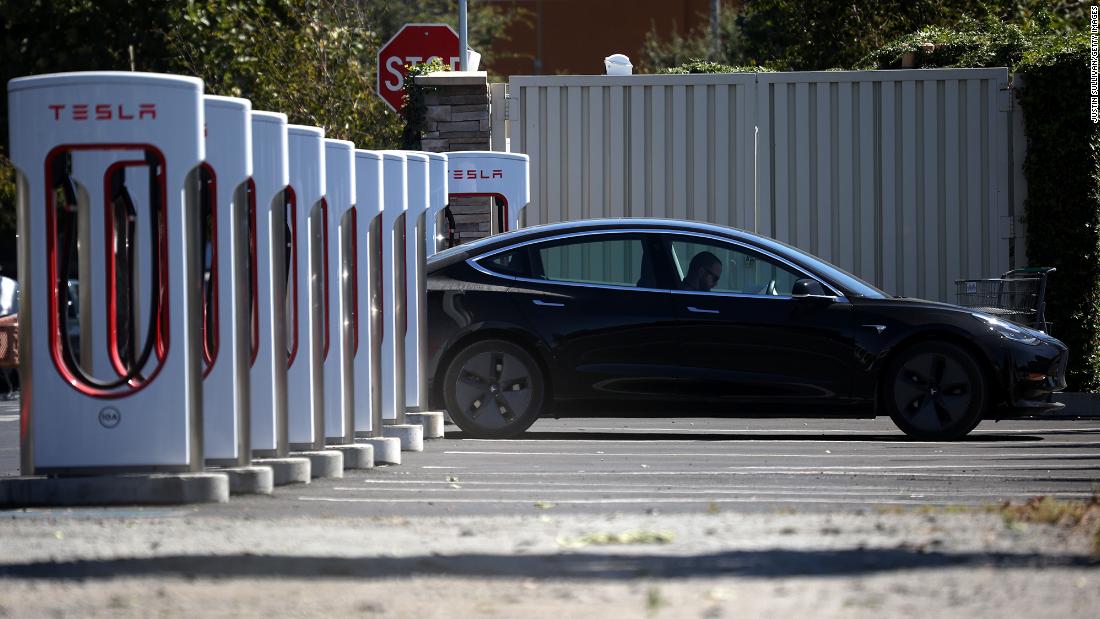 President Joe Biden will be celebrating ambitious electric vehicles goals by automakers at the White House on Thursday. But he’ll be doing so without the world’s largest maker of EVs: Tesla.

Joining Biden will be executives from General Motors (GM), Ford (F) and Stellantis, the company formed by the merger earlier this year of Fiat Chrysler and France’s PSA. But electric vehicles are only a sliver of these companies’ US sales — 1.5% for GM and 1.3% for Ford (F) so far this year, while Stellantis doesn’t have any pure EVs for sale on US soil yet.

Meanwhile, Tesla (TSLA) makes nothing but battery-powered electric vehicles, and always has. So why wouldn’t the world’s biggest maker of EVs be invited to the table?

One potential reason for the apparent snub: The United Auto Workers union will also be at the ceremony. The UAW represents workers at GM, Ford and Stellantis, but has been battling, so far unsuccessfully, to organize Tesla workers at the EV maker’s plant in Fremont, California.

White House Press Secretary Jen Psaki was asked about Tesla’s absence at her briefing Thursday ahead of the event.

“Well, we of course welcome the efforts of automakers who recognize the potential of an electric vehicle future and support efforts that will help reach the President’s goal, and certainly Tesla is one of those companies,” Psaki said. “I would not expect this is the last time we talk about clean cars and the move towards electric vehicles, and we look forward to having a range of partners in that effort.”

Asked if Tesla being a nonunion company was the reason it wasn’t included Thursday, Psaki replied, “Well, these are the three largest employers of the United Auto Workers, so I’ll let you draw your own conclusions.”

The three automakers issued a joint statement early Thursday announcing their “shared aspiration” for plug-in vehicles to comprise 40% to 50% of their sales by 2030. But that total would include plug-in hybrids that also have gasoline-powered engines.

The Biden administration’s previous statements about promoting greater use of EVs pointed to their importance in creating “good-paying, union jobs.”

UAW spokesman Brian Rothenberg said he was not aware that Tesla was not invited to the event when asked about it by CNN.

Volkswagen (VLKAF), which has surpassed Tesla in EV sales in Europe so far this year, is due to start building an EV for the US market at its Chattanooga, Tennessee, plant in 2022. But the UAW has twice failed to win union representation votes at that plant. The German automaker also will not be represented at the White House event.

Although Tesla has opened up a second assembly line in Shanghai, China that is serving Asian and European sales, not US sales. It has two plants under construction, one near Austin, Texas, another near Berlin, Germany.

For now, the Teslas sold in the United States are made at its Fremont plant, and are far more domestically sourced for parts than the Chevy Bolt, which gets about three-quarters of its components, including the expensive batteries, from South Korea, according to a US government report. GM is building US battery factories with partners that will increase its domestic content in the future.

Teslas already get 50% to 55% of their components from US factories, according to the same government report. The domestic content of the Mach-E, which only came out late last year, is not yet available.

– CNN’s Betsy Klein and DJ Judd contributed to this report