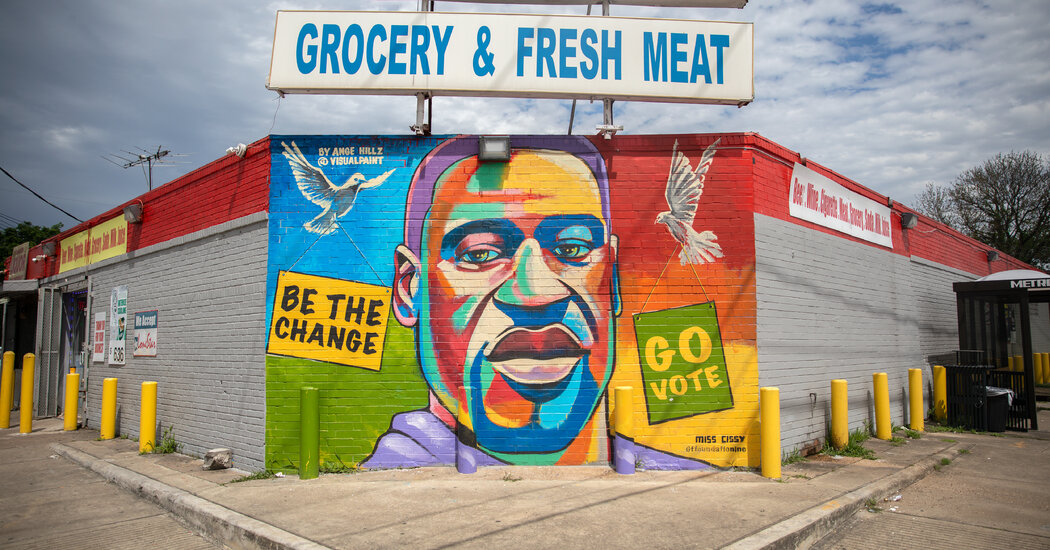 The Texas Board of Pardons and Paroles has withdrawn a recommendation that George Floyd be granted a posthumous pardon for a 2004 drug conviction in Houston, citing “procedural errors” in the recommendation.

“The Board of Pardons and Paroles has withdrawn 25 clemency recommendations that contained procedural errors and lack of compliance with board rules,” Renae Eze, a spokeswoman for Gov. Greg Abbott, said in a statement on Thursday.

“The board will review and resolve procedural errors and issues related to any pending applications in compliance with their rules,” Ms. Eze said. “As a result of the board’s withdrawal of the recommendation concerning George Floyd, Governor Abbott did not have the opportunity to consider it.”

Ms. Eze said that Mr. Abbott “will review all recommendations that the board submits for consideration.”

The withdrawal was announced on Thursday in a statement in which the governor’s office said that Mr. Abbott had granted clemency to eight Texans, part of an annual tradition of approving such recommendations.

The question of whether to issue a pardon for Mr. Floyd had put Mr. Abbott, a Republican, in a tough spot politically.

Debates over policing have grown increasingly contentious and partisan since Mr. Floyd’s death in police custody in Minneapolis on May 25, 2020, was captured on video and viewed by millions, galvanizing support for reforms.

Allison Mathis, a Harris County public defender who had applied for the pardon for Mr. Floyd, told The Dallas Morning News that the withdrawal “smacks of something untoward.” She said she had not been informed that anything was wrong with the application.

“Greg Abbott and his political appointees have let their politics triumph over the right thing to do,” Ms. Mathis told The Morning News.

“This is actually outrageous,” she said. “I expected an up or a down vote. I did not expect this kind of misconduct.”

Posthumous pardons are vanishingly rare in Texas. Only one was issued in recent memory, more than a decade ago.

Mr. Floyd was arrested in Houston in February 2004, accused of selling $10 worth of crack in a police sting. He later pleaded guilty in a case that hinged on the word of a narcotics officer who has since been accused of falsifying evidence and making false statements in other cases.

In October, the state parole board recommended a pardon for Mr. Floyd, a Black man whose murder by a white Minneapolis police officer last year touched off nationwide protests over policing and fueled a movement to address racism.

Mr. Gutiérrez said he had instructed staff members to examine the panel’s practices and procedures “in an effort to explain this aberration.”

The examination revealed that the “board made a number of unexplained departures from its own rules” in issuing many of its recommendations, Mr. Gutiérrez wrote.

He said the board would withdraw and reconsider the clemency recommendation for Mr. Floyd and others and then send Mr. Abbott “updated recommendations” that comply with the rules.

The approach will avoid the two-year waiting period that would otherwise apply to an application for clemency, Mr. Gutiérrez wrote.

In his initial reaction to the killing of Mr. Floyd, Mr. Abbott expressed sympathy for his family and appeared at a memorial service in Houston where he promised reforms to “prevent police brutality like this from happening in the future in Texas.” He was photographed paying respects by Mr. Floyd’s coffin.

The Texas Legislature passed several piecemeal reform measures this year, including a ban on chokeholds, but did not go as far as advocates had hoped on a set of measures known in Texas as the George Floyd Act.

He backed bills to take away funding from municipalities that shift money from their police departments and new penalties for protesters, requiring jail time for those who block emergency vehicles. And Mr. Abbott came to Houston to sign a measure that requires bail for people accused of a violent crime.

Among the bills that did not make it to Mr. Abbott’s desk was a measure that would have required more proof than just the word of an undercover officer or an informant for a conviction — a measure aimed at preventing cases like Mr. Floyd’s. It passed in the Texas House but stalled in the Senate.

Mr. Floyd had been one of more than 150 people identified by the Harris County District Attorney’s Office as having been convicted in cases where the only witness was a narcotics officer, Gerald M. Goines, or in which Mr. Goines submitted a search warrant.

Mr. Goines, who has since retired from the Houston Police Department, is facing murder charges for what prosecutors said were false statements on a search warrant that led to the police killing of a couple in their Houston home in 2019.

In the case of Mr. Floyd, Mr. Goines said that he had observed Mr. Floyd during an undercover drug sting handing over a “dime rock” of crack cocaine.

Mr. Floyd, who had been a longtime resident of Houston’s Third Ward, a historically Black neighborhood, before moving to Minneapolis, initially fought the charges but eventually pleaded guilty in exchange for a 10-month sentence.

The pardon application for Mr. Floyd found support from the Harris County district attorney, Kim Ogg, whose office has been reviewing convictions in Mr. Goines’s cases. Ms. Ogg, a Democrat, was elected to a second term last year, defeating a candidate with police union backing.

Mr. Goines pleaded not guilty to the charges against him. And a lawyer representing him said there was “no new evidence” to indicate problems with previous cases he had been involved in.