The 52 Democrats left the Capitol last month to keep conservative lawmakers from having the required quorum to move forward with the legislation.

The warrants “will be delivered to the House Sergeant-at-Arms tomorrow morning for service” a spokesperson for Phelan said Tuesday, according to the Texas Tribune.

Hours after the state’s Supreme Court ruled the Democrats could be civilly detained, the Texas House voted 80-12 to issue the warrants, the Dallas Morning News reported.

The Supreme Court had overturned a Monday district court decision blocking the warrants.

Texas lawmakers came back Saturday for the second special session ordered by Gov. Greg Abbott but have still been unable to make a quorum, KFOX 14 in El Paso reported.

State Rep. Chris Turner, chair of the Texas House Democratic Caucus, said in a statement Tuesday it’s “fully within our rights as legislators to break quorum to protect our constituents. Texas House Democrats are committed to fighting with everything we have against Republicans’ attacks on our freedom to vote,” according to the paper. 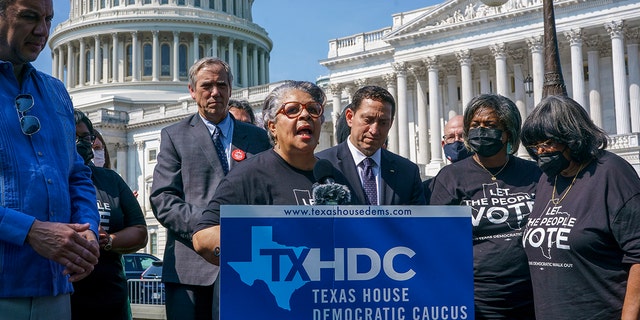 Texas state Rep. Senfronia Thompson, dean of the Texas House of Representatives, is joined by Sen. Jeff Merkley, D-Ore., left center, and other Texas Democrats, as they continue their protest of restrictive voting laws, at the Capitol in Washington, Friday, Aug. 6, 2021. (AP Photo/J. Scott Applewhite)

Republicans made a similar move in July during the first special session when dozens of Democrats left the state for Washington, D.C. in protest of the bill. But law enforcement’s jurisdiction ends outside of the state and Phelan ended up only issuing one arrest warrant for a Democrat who came back to Texas briefly but then left again for D.C. according to KFOX.

Many of the Democrats have now returned to the state but not their jobs.

The first special session was ordered by Abbott after the Democrats staged a walkout during the regular session in May to block the bill.

The warrants would allow for the lawmakers to be brought to the House chamber and wouldn’t involve criminal charges or fines, the Tribune reported.

“I just question whether [the Texas Department of Public Safety] or anyone can break down my door to come and put me in shackles and drag me there,” Democratic state Rep. Vikki Goodwin told the News. “I feel certain that I can stay in my home, and stay off the House floor.”

The Democrats claim the voting bill in question amounts to voter suppression against minorities while Republicans say the provisions like requiring an I.D. to vote by mail and banning drive-through and extended hours during early voting make elections more secure.

A quorum requires two-thirds of the chamber’s 150, leaving it only four short as of Monday, according to the News.