A Texas state senator ended a 15-hour filibuster Thursday in the Democrats’ latest defiance over a new voting legislation, but it only delayed Republicans who went on to approve the sweeping elections bill just minutes after she wearily left the floor.

The GOP’s sustained efforts to tighten Texas’ election laws, however, remained no closer to Republican Gov. Greg Abbott’s desk than a month ago. Democrats are still refusing to show up in the state House of Representatives in a standoff that has now dragged on for 32 days, preventing the Senate bill from going any further.

Democrat Carol Alvarado began speaking shortly before 6 p.m. Wednesday even though she acknowledged that the filibuster would not block the legislation in the Senate. She was required to remain standing and speaking, was prohibited from taking bathroom breaks and wore running shoes on the Senate floor, just as former Texas legislator Wendy Davis did in 2013 when she filibustered a sweeping anti-abortion bill.

“What’s wrong with drive-thru voting during a pandemic? What’s wrong with 24-hour voting? Why can’t we have expanded voting hours for the people who have to work late? Where is all the so-called fraud?” Alvarado said in the closing moments of her filibuster. “Where does it end?” 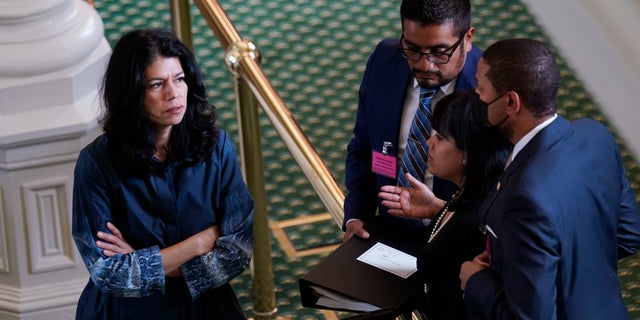 ABBOT RIPS WHITE HOUSE, SAYS TEXAS CAN HELP WITH OIL PRODUCTION IF BIDEN ADMIN WILL ‘STAY OUT OF THE WAY’

She hugged her Democratic colleagues after finally putting down the microphone. Minutes later, the bill passed 18-11 in the Senate, but it is once again stalled since Democrats continue their holdout at the other end of the Texas Capitol.

Alvarado’s filibuster began hours after officers of the Texas House of Representatives delivered civil arrest warrants for more than 50 absent Democrats on Wednesday. Frustrated Republicans have ratcheted up efforts to end the standoff over the elections bill.

But after sergeants-at-arms finished making the rounds inside the Texas Capitol – dropping off copies of the warrants at Democrats’ offices, and politely asking staff to tell their bosses to please return – there were few signs the stalemate that began when Democrats fled to Washington, D.C., in July in order to grind the statehouse to a halt was any closer to a resolution.

The latest escalation threw the Texas Legislature into uncommon territory with neither side showing any certainty over what comes next, or how far Republicans could take their determination to secure a quorum of 100 present lawmakers – a threshold they were just four members shy of reaching.

“I don’t worry about things I can’t control,” said state Rep. Erin Zwiener, one of the Democrats who was served with a warrant and has refused to return to the Capitol. “Nothing about these warrants are a surprise, and they don’t necessarily affect my plans.”

Democrats, who acknowledge they cannot permanently stop the GOP voting bill from passing because of Republicans’ dominance in both chambers of the Texas Legislature, responded to the warrants with new shows of defiance. One turned up in a Houston courtroom and secured a court order aimed at preventing him from being forced to return to the Capitol.

The NAACP also stepped in on behalf of the Texas Democrats, urging the Justice Department to investigate whether a federal crime was being committed when Republicans threatened to have them arrested. 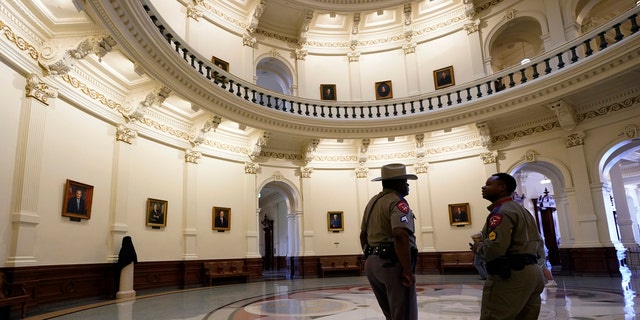 Texas Department of Safety officers stand watch over the Texas Capitol, Wednesday, Aug. 11, 2021, in Austin, Texas. Officers of the Texas House of Representatives delivered civil arrest warrants for more than 50 absent Democrats on Wednesday as frustrated Republicans ratcheted up efforts to end a standoff over a sweeping elections bill that stretched into its 31st day. (AP Photo/Eric Gay)

Refusing to attend legislative sessions is a violation of House rules – a civil offense, not a criminal one, leaving the power the warrants carry to get Democrats back to the chamber unclear, even for the Republicans who invoked it. Democrats would not be jailed. Republican Travis Clardy, who helped negotiate an early version of the voting bill that Democrats first stopped with a walkout in May, said he believes Democrats can be physically brought back to the Capitol.

State Rep. Jim Murphy, who leads the Texas House Republican Caucus, said while he has not seen a situation like this play out during his tenure, his understanding is that officers could go to the missing lawmakers and ask them to come back.

“I am hoping they will come because the warrants have been issued and they don’t want to be arrested,” Murphy said. “It is incredible to me that you have to arrest people to do the job they campaigned for, for which they took an oath of office to uphold the Texas Constitution.”

The Texas Department of Public Safety, the state’s law enforcement agency, referred questions about the warrants to the House speaker.

The move marks a new effort by the GOP to end the protest over elections legislation that began a month ago with 50 Democrats taking private jets to Washington in a dramatic show of resolve to make Texas the front lines of a new national battle over voting rights.

Republicans are now in the midst of their third attempt since May to pass a raft of changes to the state’s election code that would make it harder to cast a ballot in Texas.

Texas is among several states where Republicans have rushed to enact new voting restrictions in the wake of former President Donald Trump’s false claims that the 2020 election was stolen. The current bill is similar to the ones Democrats blocked last month by going to the nation’s capital. Its provisions include a ban on 24-hour polling locations and most drive-thru voting and giving partisan poll watchers more access to polling places.

It was unclear Wednesday how many Democrats remained in Washington, where they had hoped to push President Joe Biden and other Democrats there to pass federal legislation that would protect voting rights in Texas and beyond. Senate Democrats pledged to make it the first order of business when they return in the fall, even though they don’t have a clear strategy for overcoming steadfast Republican opposition.