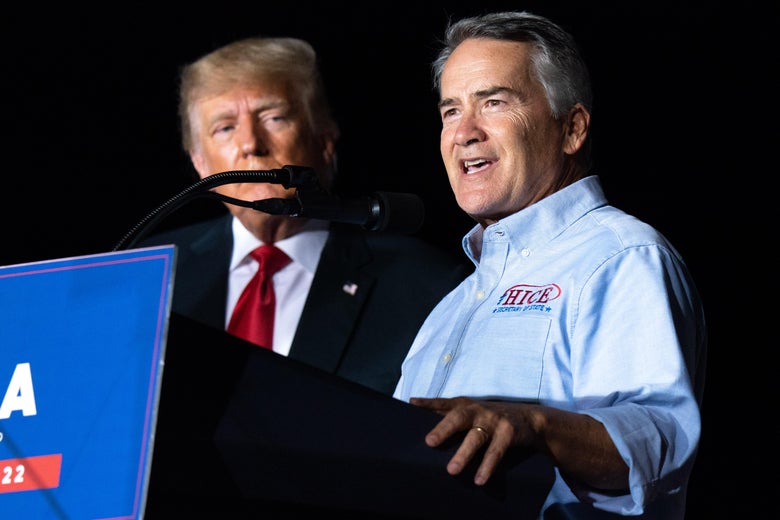 Arizona’s partisan election review concluded last month by finding more votes for Joe Biden in its flawed hand count of Maricopa County and without alleging any specific fraud. Despite these findings, the partisan review offered false and unvetted innuendo about “anomalies” in the 2020 election that were parroted by Donald Trump to claim that he had been vindicated in his lie that the election was stolen.

The result of the failed and illegitimate Arizona election review has not made the Big Lie go away. Instead, other states have pushed for similar reviews with Trump’s backing, including in Pennsylvania, Wisconsin, and even Texas, where Trump won. The former president has also endorsed a number of candidates who believe in the Big Lie for secretary of state positions in 2022. If they win, they would control the election infrastructure and—in some cases—formal election certification processes in critical swing states. Given the stakes in 26 states that are holding elections for secretary of state next year, the results in 2022 could determine the extent to which the 2024 election—in which Trump has indicated he plans to run—will be free and fair.

On Friday, I spoke with the chair of the Democratic Association of Secretaries of State and Colorado secretary of state, Jena Griswold, about the threats of ongoing partisan election reviews, which Trump-backed secretary of state candidates pose the greatest threat to democratic elections, and whether she felt confident that supporters of democracy are actually winning the fight to preserve democratic elections in the United States. Our conversation has been edited and condensed for clarity.

Jeremy Stahl: There is trouble around the word audit or forensic audit, which implies some sort of scientific process where none exists, in talking about the sorts of investigations that were conducted in Arizona and are continuing to be conducted around the country. What do you think the best language would be for members of the media to use when independently and objectively describing these things?

Jena Griswold: They definitely are not audits if we believe words have any meaning anymore. I would say “fake reviews.” “Fake investigations.” When you use the term review, investigation, audit, it has a connotation of something official—something based on fact—and that’s not what these are. These are political theater to suppress the vote across the nation and decrease confidence so much that in future elections there is an easier path to contest when extreme Republicans don’t like the outcome.

I think it’s really important that the media is communicating to readers, to viewers, that there’s nothing official or fact-based about what’s going on. You just have to look toward Arizona to see the level of farce. But the farce is intended, right?

To be very clear, the type of disinformation that started in 2020 and honestly before the Big Lie—which has just gotten out of control—it is growing bigger, it has caused violence, it has caused insurrection, it’s causing threats against election officials, it is setting the path for the 500 bills to suppress the vote, it’s setting the path for the removal of Black Democratic women from election positions, the stripping of [authority from] secretaries of state on both sides of the aisle. Really what we are seeing right now is the all-out assault on democracy.

One specific tactic of these audits was articulated by conservative former Wisconsin Supreme Court Justice Michael Gableman, who is conducting the Wisconsin version of the Arizona audit, when he said: “The burden is not on the people to show in advance of an investigation that public officials and their contractors behaved dishonestly.” The responsibility, he says, “is on the government and on the private, for-profit interests that did work for the government” to prove fraud didn’t occur. That shifts the burden of proof to a very challenging standard to demonstrate that nothing was wrong without any specific allegation. I’m wondering if that’s something you’ve seen in some of these other places with sham audits?

I think even that characterization is incorrect, because look at Colorado. We are the first state in the nation to have bipartisan risk-limiting audits that are the best type of audits that tell us with a statistical degree of certainty that the outcome is correct, and with a high statistical degree of certainty that, if there is an issue, we would find it. We’re talking about 96, 97 percent certainty with just those audits, let alone everything else we do, such as bipartisan testing of voting equipment and signature verification. But even in Colorado, there were calls to do these fake audits and they were getting so much vitriol that it even led to death threats to Republican county clerks.

I do not think that that former judge is correct. It doesn’t matter whether you have shown as a state that your elections are safe and secure. This isn’t about facts. This is about lying, gaslighting the American people to tilt future elections for extreme Republicans to win easier, which is about as un-American as possible.

Jumping back to your previous question, just giving it more thought, something to consider is “partisan review,” because these aren’t audits. No matter how you package the terminology, it’s really important that we do not give a guise of officialness to what is happening.

If you had to pinpoint a specific state, or place, or area to focus energy, which of the ongoing audits in Pennsylvania, in Wisconsin, in Texas now, is the scariest to you and is the one where you think energy might be most usefully focused, if you had to pick?

This isn’t about 2020 anymore. This is about putting so much misinformation out and really chipping away at confidence so that all future elections are easier to contest, which is frightening. There is absolutely no proof that anything was wrong in 2020. In fact, the opposite, there is proof that it was the most secure election in American history, that we had record turnout among both Republican and Democratic voters across the nation. Again, this isn’t about facts. This is about: How do they chip away in confidence in belief in the election system, so the next time an American president tries to steal the presidency, or the next time there’s a race that extreme Republicans just don’t like, they have better footing to try to grab the election?

Around the concern that the partisan reviews are about targeting 2022 and 2024 and other future elections, there are 26 states that are going to have elections for secretary of state in 2022. In many states, those positions still have a great deal of power in the procedures of running elections and some of the formal aspects of certifying elections. Some of the candidates running in Republican primaries have been very explicit about how they view the 2020 election. For example, one candidate, Mark Finchem in Arizona, attended the Jan. 6 “Stop the Steal” rally that turned into the insurrection and has said, “I call on Arizona to decertify the election of 2020 and recall the electors.” He did that last month. In your role as the chair of Democratic Association of Secretaries of State, can you offer some guidance on where the most potentially dangerous candidates are running, who they are, and what they’re trying to do?

2022 is going to have a huge impact on democracy, because we are seeing the Big Lie proponents running to become secretary of state. In every swing state that has a secretary of state race, there is an extreme Republican candidate that was either at the insurrection, an author of voter suppression, or an advocate of the Big Lie. That includes Mark Finchem. You also have in Arizona, Michelle Ugenti-Rita, who was an author of [a] voter suppression [bill]. It includes in Georgia, where Congressman Jody Hice voted against certifying the 2020 electoral college results and has repeatedly claimed that the elections in Georgia were rife with irregularities. You have Kristina Karamo in Michigan, who falsely claimed former President Trump won Michigan and spent weeks challenging election results. She also, by the way, visited Arizona to see the partisan election review. Then you have Jim Marchant in Nevada, who basically alleged voter fraud in his own congressional loss when he lost by 5 points. And here in Colorado, I’m running against a person who again is spreading the Big Lie.

President Trump recently endorsed multiple Republican candidates for secretary of state who have been spreading the Big Lie. And he keeps making it clear that he’s making disavowing facts and election results a litmus test to an endorsement. And that’s why the 2022 election is going to be so important. Voters will get to choose who they want to oversee the elections. Democracy is literally going to be on the ballot.

Can you be more precise in the potential dangers in 2024 and moving forward if various election official races, but specifically secretary of state elections, go toward anti-democratic candidates in 2022? Also, do you think you’re winning this public debate?

The [reverse] is also true. Some states, like Colorado, have really strong guidelines to make sure our secretary of state could not just suppress the vote. Other states do not. You can be the top advocate for voters—I was able to lead the largest democracy report in the nation using my position as secretary of state. You could also be the top advocate for suppressing the vote and pushing out disinformation. We had a situation in Western Colorado where a county clerk leaked sensitive county information to QAnon in furtherance of the Big Lie. I went in and investigated and determined we could not affirm that election equipment was not compromised and I decertified all the election equipment. I didn’t need to do that under Colorado law. You could have secretaries of state refusing to act in really important situations. You could also imagine if a secretary of state lied and said the things that Finchem is saying, said the things that these extreme candidates are saying. That would be a tremendous blow to confidence.

Again, do you feel like you’re winning the debate?

I will say that I think extreme Republicans are incentivized to lie, to spread misinformation, to try to take the freedoms away from American voters right now. And that’s why we’re seeing the Big Lie get worse and worse. They know that if they don’t fall in line with Donald Trump’s fantasies and his extremism, they’re going to have a rough time, either with super PACs that will come in, extreme right challenges, and a host of political issues.

What we need to do is disincentivize them. And that can be done in a couple of ways. It can be done by making sure that election officials who are elected to govern over the election and who breach that trust by spreading lies and conspiracies are held civilly and criminally liable. It can be done by attorneys representing these bad actors being sanctioned and disbarred if they use the legal system to try to destroy American democracy. And it’s important for Americans on the right side of history to know that we can win the battle for democracy by electing national and local leaders who will uphold democratic values of our nation. And it’s not enough right now to watch this attempted slow-motion erosion of democracy and hope for better days. Those better days depend on us. We must continue to demand that candidates and elected officials respect who we are as a nation. They must know that they cannot win through destruction. We need to turn every single person spreading the Big Lie into a big loser at the ballot box in 2022, because only then are they going to stop lying.