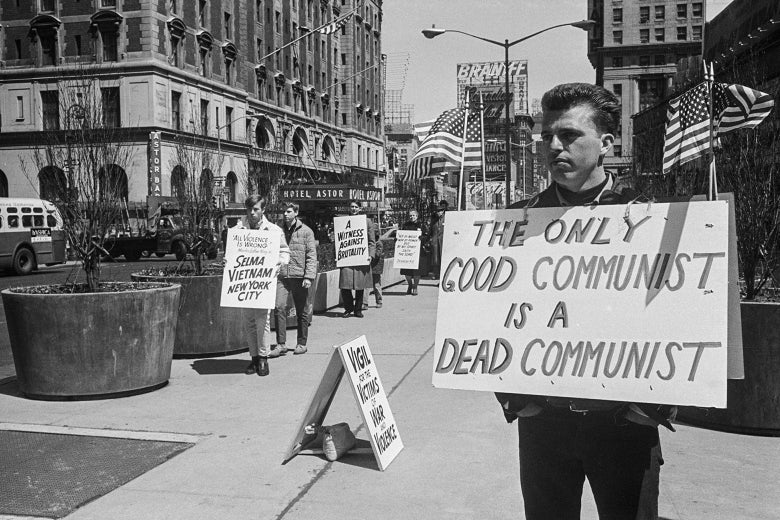 The Democrats are in disarray again, and this time it’s because liberals are too “woke.” That, at least, is the analysis of many pundits in the aftermath of the crushing Democratic defeat in Virginia earlier this month. The chorus singing this tune includes plenty of familiar voices from the center, but also some on the left who have concluded that “critical race theory” and the academic jargon of anti-racism are off-putting to working-class voters. If only Democrats would distance themselves from this political correctness run amok, the argument goes, they could potentially stanch the bleeding for 2022 and 2024.

There are a few problems with this. One, it’s unclear just how important anti-CRT rhetoric was in the GOP victory in Virginia. There was a notable shift to the Republican Party in New Jersey as well, where Democratic Gov. Phil Murphy barely won reelection, and where CRT was a nonissue. Two, even if the CRT moral panic did play a role in mobilizing Virginia voters, it is unclear whether CRT as a talking point has much of a shelf life beyond the election. The fact that Fox News has all but ceased to talk about CRT after Youngkin’s victory suggests that anti-CRT rhetoric was a cynical electoral ploy to mobilize the racial resentment of white voters, and that even if critical race theory had never been developed by evil queer black Communist Marxist academics in the late 1980s, some other racist boogeyman would have been invoked by the right-wing media machine. Liberals and leftists who are obsessing about distancing themselves from the excesses of academic anti-racism are missing the point: The actual specifics of CRT or diversity, equity, and inclusion initiatives are largely irrelevant. The outrage is what matters.

A daily email update of the stories you need to read right now.

Some Democrats apparently believe that the way to get ahead of the issue is to torpedo anti-racism and embrace the language of 100 percent Americanism. California Rep. Ro Khanna recently tweeted that “Democrats must embrace a deep patriotism that celebrates our goodness” and that America “is an exceptional nation.” Khanna’s rhetoric is eerily reminiscent of Cold War liberalism, the dominant ideology of the Democratic Party in the decades following World War II. The temptation among today’s Democrats and liberals to embrace the language of Cold War liberalism in response to the right’s “anti-CRT” tactic is one that should be resisted. It didn’t work out too well the first time.

Cold War liberals got their moniker because they were both liberal and militantly anti-Communist. Part of this anti-communism was genuine antipathy to Stalinism and perceived Soviet expansionism after World War II. Many liberals also had less than fond memories of the obstreperous nature of the Communist Party in the United States during the 1930s—the Communists were infamously difficult to work with, given the constantly shifting party line from Moscow. But, crucially, the first generation of Cold War liberals in the mid-1940s also turned militantly against communism in order to quash the issue and prevent right-wingers from seizing upon it.

This didn’t work. In fact, it produced the opposite outcome. Most of the most important liberal anti-Communist measures predated McCarthyism; Sen. Joseph McCarthy didn’t make his first wild claims about Communist infiltration of the State Department until February 1950. What most spooked liberal Democrats was the Republican capture of Congress in the 1946 elections, the first time the GOP had majorities in either the House or Senate since 1932. Since so many Republicans had run redbaiting campaigns—Richard Nixon won his first House race in California that year all but accusing his moderate opponent Jerry Voorhis of being a Communist—it seemed prudent to liberal leaders to take action on the issue that (like CRT today) seemed like an albatross around their necks.

By far the most damaging liberal reaction to right-wing anti-communism was Harry Truman’s establishment of a loyalty program for federal employees. Truman was himself ferociously hostile to communism and was concerned about Soviet espionage in the United States, but a major impulse behind his decision to issue an executive order establishing a special commission on the loyalty of federal employees in March 1947 and the creation of a formal bureaucratic program a year later was a concern that conservatives and Republicans—who had just won control of Congress for the first time since 1930—would accuse the administration of being soft on communism.

There were basic conceptual problems to this strategy. For one, the very creation of the loyalty program ceded ground to right-wing charges that the federal government was riddled with Communists. If there was no basis to the charges, then why did Truman create the loyalty program? For another, conservative anti-communism was not simply based in national security concerns: Since the 1930s, right-wing opponents of the New Deal had charged that the Roosevelt administration was secretly controlled by Moscow and was trying to Bolshevize America. A loyalty program that Truman intended to use to purge actual Communists from New Deal agencies was never going to be an effective political response against an opposition that rejected the legitimacy of the New Deal in the first place.

And while Truman was very aware of the potential dangers of establishing a loyalty program—he attempted to keep the Federal Bureau of Investigation, which he derided to friends as a potential “Gestapo” under the directorship of J. Edgar Hoover, as far away from the administration of the program as possible—in practice this goal of purging only actual Communists proved to be impossible. Truman sought to avert an out-of-control Red Scare fueled by right-wing hysteria through the loyalty program; instead, he poured gasoline on the fire. And the success of McCarthy, who rose to national prominence after Truman’s establishment of this program, showed that the program didn’t even serve the political purpose its architects intended.

Around the same time, the American labor movement had its own problems trying to parry anti-Communist rhetoric. Communist Party members had long been prominent in organized labor, and there were, in fact, some unions that were dominated by Communists. But there was also a strong tradition among business owners, dating back to the 1920s, of accusing all labor unions of being tools or dupes of international communism. This was particularly a favorite tactic in the South, where the Communist Party was actively organizing Black sharecroppers and industrial workers. The Communist Party platform in the 1930s even included a plank on “self-determination” for the Black Belt, and described Black Americans as a subject colonial population in the United States.

When the Congress of Industrial Organizations launched its bid to organize industry in the South in the spring of 1946, it sought to preemptively squelch the intense racism and anti-communism in the white South by excluding Communists and radicals from its plans. This meant not only turning its back on potential resources during the campaign—the Highlander Folk School, which would serve as the training ground for an entire generation of civil rights leaders, was shunned because of the alleged Communist connections of Don West, one of its co-founders—but also directly attacking Communist-aligned unions. In Birmingham, Alabama, the United Steelworkers began a campaign to raid the rival International Union of Mine, Mill, and Smelter Workers for membership. There were intense racial overtones to the campaign: Most of the workers who switched to the United Steelworkers were white and resented the Communist-influenced Mine Mill commitment to interracial organizing.

Operation Dixie was probably always doomed to fail. The CIO faced an uphill battle to organize the segregationist South regardless of where it stood on communism. But purging the Communists from the effort seriously limited the prospect of building interracial labor power, and helped to undermine and in some cases outright destroy Black trade unions in the South. The Birmingham local of Mine Mill collapsed in 1949, effectively destroying one of the most important Black political institutions in the city. And more broadly, the failure of Operation Dixie and the decimation of Black organized labor in the South—by cementing the region as a low-wage, nonunion space—would have disastrous effects on the future of organized labor in America.

Cold War liberalism would eventually rebound from the electoral losses of 1946. Harry Truman won reelection in 1948, and while the Republican Dwight Eisenhower succeeded him, Ike was by a considerable margin the most moderate contender for the Republican nomination in 1952. But the long-term consequences of the anti-Communist purge were considerable. As the historian Landon Storrs has shown, social democrats and other non-Communist leftists in the federal bureaucracy—especially women—had their careers destroyed. Organized labor began its long, slow decline as it receded from its most radical claims to industrial democracy. And, ominously, Democrats became obsessed with appearing “strong” on communism, leading to future debacles like the Bay of Pigs invasion and the American war in Vietnam.

The anti-anti-racism movement among liberals and leftists is not—unlike the CRT moral panic on the right—merely a cynical ploy. But it is nevertheless troubling. As with the Cold War liberals’ embrace of anti-communism, coming out against “wokeness” might make apparent short-term political sense. But the consequences of embracing the logic of the right can be potentially disastrous. In the long term, it can mean fatally weakening necessary political allies. In the short term, it can apparently vindicate the arguments of the right-wing media outrage machine, simply adding fuel to the fire. Fox News has already stopped talking about critical race theory—why are so many liberals keeping the conversation going?