A new book about the royals has been released in Australia the day Her Majesty was laid to rest, a touch too late to address the Queen’s death.

Still, the latest release from author Katie Nicholl﻿ has managed to lay bare some little-known facts about key moments in the royal family’s history.﻿

The New Royals: Queen Elizabeth’s Legacy and the Future of the Crown chronicles important events that led to the British monarchy as it now stands, including Her Majesty’s preparation of King Charles III and Prince William before her death, how Camilla forged a bond with William and Prince Harry and the European royals the Prince and Princess of Wales are modelling their family on.

Here are 10 of the most interesting revelations in the book, out now.

1. William played an important role in bringing Camilla into the family

A year after Princess Diana’s death, Camilla attended a party at Highgrove for King Charles’ birthday, said to be a turning point in her relationship with Charles’ family.

Nicholl writes that it was the first night Camilla spent the night with Charles, having officially met William and Harry that same year, meeting William first and with William’s help, getting to know Harry a few months later.

“It had been William’s idea to invite Camilla, Tom, and Laura on their holiday yacht The Alexander,” Nicholl explained, adding that seeing how happy Camilla made their father helped cement her place in the family.﻿

2. The brothers fell out long before ‘Megxit’﻿

William and Harry haven’t always been close, as has often been portrayed. In fact, Nicholl writes the brothers suffered their first major falling out in 2001 when they were aged 19 and 16.

The brothers had reportedly gotten into mischief at a party, drinking and smoking various substances.﻿

“Harry was given a furious dressing down by his father, which led to him falling out with William properly for the very first time,” she wrote.

“Harry resented taking the flack when William had also been drinking at the Rattlebone Inn.”﻿

Nicholl describes King Charles and Prince Andrew’s relationship as “glacial” by the time of Queen Elizabeth’s Diamond Jubilee in 2012, made worse by the fact key royals were not invited to stand on the balcony with Her Majesty, including Prince Andrew as well as Princess Anne and Prince Edward.

“That balcony appearance would be a turning﻿ point in Charles’ relationship with his younger brother, which today remains glacial,” Nicholl said.

This reportedly began with changes Charles made to the structure of the monarchy and who would receive benefits, which affected Andrew’s children Princess Beatrice and Eugenie, and was made worse by the sex scandal that would later affect the Duke of York.﻿

4. The scandal that forged a bond between the King and the Prince of Wales﻿

It was during Prince Andrew’s sex scandal that Charles and William forged a close bond, working together for the good of the monarchy.

Before the scandal broke, the pair clashed over the palace’s ivory collection and the King not seeing his grandchildren as often as he’d like.

“But on the Andrew issue father and son were united,” Nicholl wrote.

READ MORE: ‘Meghan doesn’t deserve one iota of the abuse she has endured’﻿

“It was really the start of them forming an allegiance with each other for the sake of the good of the monarchy,” she said, adding that it was about the “importance of the Crown and preserving its reputation.”﻿

5. The moment that caused King Charles to turn off Netflix series The Crown﻿

Netflix series The Crown has ﻿told the story of the royals from the Queen’s union with Prince Philip to King Charles and Diana’s relationship, which Nicholl claimed displeased the King in its portrayal of him as a “murderous wimp.”

“Charles apparently switched off in frustration at the one-sided portrayal of Diana as a victim and himself as villain,” Nicholl wrote.

However, royal historian Robert Lacey defended the series, arguing the program reflects a “more or less accurate picture of what the monarchy was going through in the late eighties and nineties”.﻿

While some monarchists speculated about the possibility of the Crown passing directly from the Queen to Prince William, this wasn’t something either father or son wanted, particularly William.

“He fought hard to be allowed to take a civilian job as an air ambulance pilot and postpone full-time royal duties. He is the father of three young children whom he wants to raise with a maximum of privacy and informality,” Nicholl explained.

She that William’s friends confirmed he was “happy to wait his turn.”﻿

7. The status of King Charles and William’s relationship today﻿

While father and son have experienced the same relationship fluctuations that happen in most families, today they are “closer than ever”, according to Nicholl.

“They are closer now than they have ever been for many years, speaking on the phone almost daily and carving out proper time for each other,” she said, adding that Charles will often stay at Sandringham to be closer to William and his family.

The Prince and Princess of Wales recently moved away from London to their home in Windsor and changed their children’s school in order to give them as normal a childhood as possible, away from the royal spotlight.

Nicholl explained: “They are being raised by their parents in a remarkably ordinary albeit privileged way with an awareness of their positions within the royal family and the roles they will one day carry out in support of the monarchy.

“While William and Kate are keen to shield them from too much public scrutiny and press attention, the children are now at an age where they know how to behave in front of cameras…”

Nicholl wrote that the children are “aware of the importance of their parents’ role” in supporting the monarchy.﻿

9. The European royals William and Kate model their new lives on﻿

The Prince and Princess of Wales’ recent moves to focus on family harks back to the European royal family tradition, according to Nicholl.

“The Cambridges’ incarnation of British royalty looks more like today’s Spanish royal family with King Felipe and Queen Letizia on the throne, or perhaps Denmark where Crown Prince Frederik and his Australian-born wife, Crown Princess Mary, are poised to succeed.”

10. The real reason William was so angry over ‘Megxit’

Nicholl claims one of the reasons William was so angry over Harry and Meghan’s decision to resign as working royals is because of the extra strain it would place on his family.

﻿”It was William who felt Harry’s departure most acutely because of the immediate repercussions on his own life,” Nicholl explained in the book.

“Friends of his say one of the reasons he won’t forgive Harry is due to the consequence of Megxit for Kate and their children.

“The Cambridges now have a significantly increased royal workload while trying to raise their young family.”

For a daily dose of 9Honey, subscribe to our newsletter here. 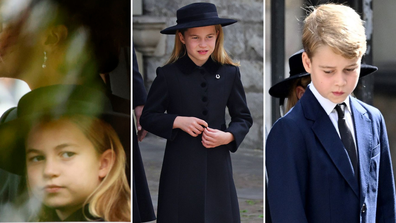 George and Charlotte farewell their great-grandmother