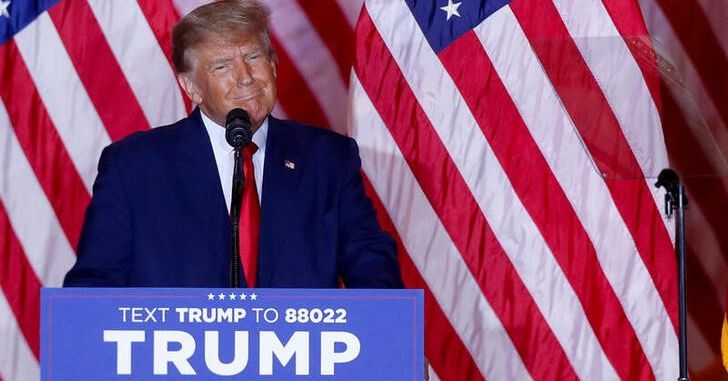 (Reuters) – When Donald Trump on Tuesday announced he was running again for president, he omitted what for the last two years has been a common refrain: that the 2020 election was “stolen,” and Democrats have illegally conspired to vilify him.

Other than a passing reference to the “rigged and corrupt system” and a promise to “eliminate cheating” by requiring same-day voting, the former president in his hour-long speech from Mar-a-Lago steered clear of election fraud allegations.

Could it be that Trump, who was impeached for his role in inciting the Jan. 6, 2021, assault on the Capitol and remains under scrutiny by a House of Representatives committee investigating the attack, has finally recognized voters aren’t swayed by his bogus election fraud claims?

Still, it’s worth recalling that judge after judge, even those Trump himself appointed, ruled in dozens of lawsuits that the ex-president and his allies did not present credible evidence of voter fraud in the 2020 election.

The Office of Donald Trump did not respond to requests for comment.

The good news is that the parade of losing suits by Trump and his lawyers has opened the courthouse doors and provided the nation’s most credible stage for knocking down his baseless allegations.

If last week’s midterm elections are any indication, voters in battleground states are not interested in re-litigating claims of election fraud. Multiple election-denier candidates lost at the polls in states including Arizona, Nevada, Pennsylvania, Michigan and Wisconsin.

The Republican National Committee did not respond to a request for comment.

Perhaps it was the sheer number of Trump’s unsuccessful election fraud suits that helped doom those candidates’ messages that the 2020 contest was rigged. According to Democracy Docket, a media platform founded by lawyer Marc Elias that tracks election litigation, Trump and his allies filed a total of 66 lawsuits challenging the 2020 presidential election. (Elias quarterbacked President Joe Biden’s state-level litigation team.)

Some suits were dismissed for lack of evidence, others for lack of standing. The plaintiffs also withdrew some of the filings.

Team Trump’s only wins came at the margins, in a suit over the deadline to confirm the identities of first-time voters who voted by mail in Pennsylvania, for example.

As for the losses? In one instance, a group of nine Trump-aligned lawyers was ordered to pay $175,000 in sanctions for what a federal judge in Michigan termed an “historic and profound abuse of the judicial process” in a suit claiming Biden fraudulently won the state vote.

U.S. District Judge Linda Parker in Detroit blasted the group, which includes Sidney Powell, for proffering claims based on “speculation, conjecture, and unwarranted suspicion” rather than solid evidence, and “undermining the People’s faith in our democracy.”

Parker’s sanctions order is on appeal before the 6th U.S. Circuit of Appeals, which has scheduled oral arguments for Dec. 8.

“We are looking forward to appearing in the Sixth Circuit and having this unprecedented sanctions order reviewed according to the law and reversed,” Powell told me via email.

Trump hasn’t stopped litigating his political grievances even after the election suits petered out. Earlier this year, he filed a vast racketeering suit in the Southern District of Florida against a laundry list of defendants including Hillary Clinton, the Democratic National Committee, Elias and his former firm Perkins Coie, Fusion GPS, Christopher Steele and James Comey.

Per the 193-page amended complaint, the defendants “maliciously conspired to weave a false narrative” that Trump was colluding with Russia – a plot “so outrageous, subversive and incendiary that even the events of Watergate pale in comparison.”

Not only did U.S. District Judge Donald Middlebrooks dismiss the complaint, but he went on last week to sanction the lawyers who brought it.

“Every claim was frivolous,” Middlebrooks wrote. “These were political grievances masquerading as legal claims. This cannot be attributed to incompetent lawyering. It was a deliberate use of the judicial system to pursue a political agenda.”

Middlebrooks ordered Trump’s lawyers to pay $16,273 to cover the legal fees of Charles Dolan, the first defendant to seek sanctions, plus a $50,000 penalty to the court.

“The judge is sending a message that lawyers have to tell their clients no when their clients want to file crazy lawsuits,” said Dolan’s attorney, George Doumar of Mahdavi, Bacon, Halfhill & Young, in a statement.

Trump lawyer Peter Ticktin of the Florida-based Ticktin Law Group said in an email that “We attempted to right a wrong, and our reward is a kick in the teeth.” He added that he believes the 11th U.S. Circuit Court of Appeals will reinstate the complaint and that “the sanctions which followed will ultimately be reversed.”

Ticktin’s co-counsel Alina Habba and Michael Madaio of Habba Madaio & Associates did not respond to requests for comment.

An even bigger sanctions motion remains pending before Middlebrooks. The other defendants’ lawyers from firms including Williams & Connolly; Debevoise & Plimpton; Weil, Gotshal & Manges; Greenberg Traurig; and Orrick Herrington & Sutcliffe want Middlebrooks to order Trump himself to pay their combined legal fess – a total of $10.47 million.

If that happens, it might be the one thing to convince Trump to quit bringing baseless litigation for good.

(CORRECTION: A previous version of this column misspelled the first name of Marc Elias.)

Opinions expressed are those of the author. They do not reflect the views of Reuters News, which, under the Trust Principles, is committed to integrity, independence, and freedom from bias.

Jenna Greene writes about legal business and culture, taking a broad look at trends in the profession, faces behind the cases, and quirky courtroom dramas. A longtime chronicler of the legal industry and high-profile litigation, she lives in Northern California. Reach Greene at jenna.greene@thomsonreuters.com