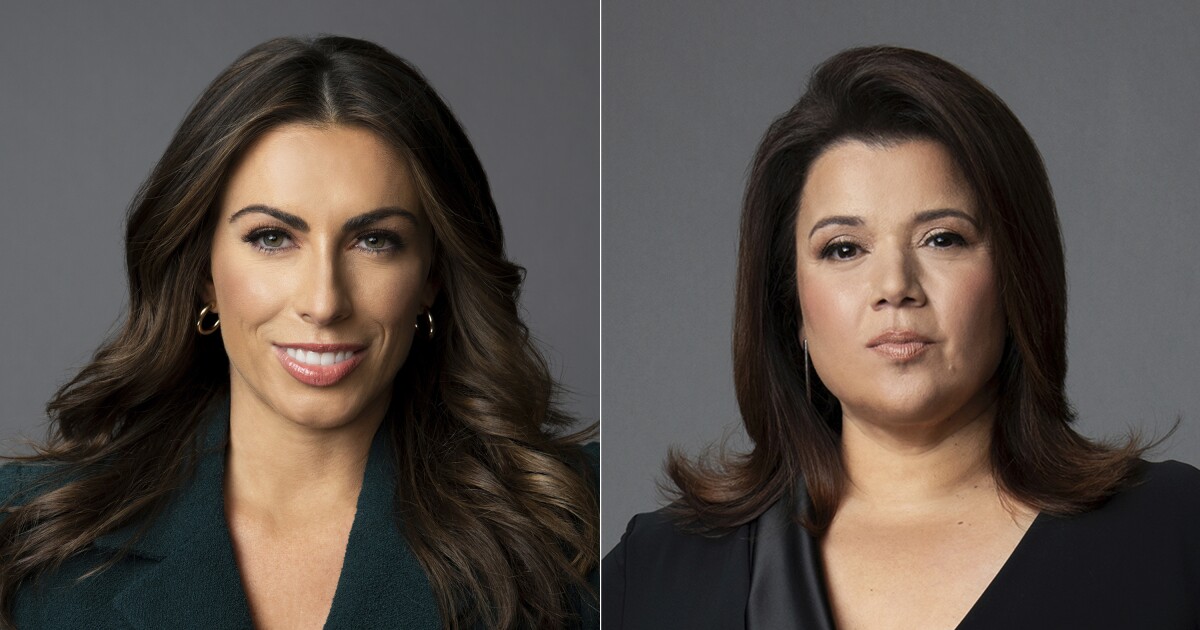 The rumors are true: Alyssa Farah Griffin, the former director of strategic communications for the Trump administration, has replaced Meghan McCain on ABC’s daytime talk show “The View.” But she isn’t the only one. The new conservative panelist will also be joined by fellow Republican and frequent panelist Ana Navarro, who was also officially named a co-host on Thursday.

Farah Griffin and Navarro join “The View’s” longtime moderator Whoopi Goldberg and co-hosts Joy Behar, Sunny Hostin and Sara Haines on the panel, ABC said, which will now have six seats rather than five. Goldberg also made the announcement on Thursday’s episode of the Emmy Award-winning series, which was created by veteran broadcast journalist Barbara Walters in 1997 and highlights women’s opinions on daily topics.

The appointments come almost exactly a year after McCain appeared on her last episode of “The View” and just before it launches its 26th season in September.

”We promised to take a little time to fill the seat and we have found the right match and a welcome addition to the show with Alyssa,” executive producer Brian Teta said in a statement from ABC. “She is willing to share her unique political experience and brings a strong conservative perspective while holding her own in tough debates with her co-hosts and guests on both sides of the aisle.”

Farah Griffin, who is also a CNN contributor, appeared on “The View” 29 times last season after serving as a top spokesperson for former President Donald Trump, former Vice-President Mike Pence and the Pentagon from 2017 to 2020.

Neither of the women seem to be fans of Trump. Navarro has criticized the former president repeatedly on the program and Farah Griffin quit his administration after the Jan. 6, 2021, insurrection at the U.S. Capitol. She said she has dealt with death threats over the last few years and “worked for an administration that I ended up speaking out against fervently and continue to do so daily,” the Associated Press reported.

“I couldn’t be more honored and thrilled to join the ladies of ‘The View,’” Farah Griffin said in the ABC statement. “The show paved the way for women speaking up and speaking out on TV. At a time when our country is so divided, often on partisan lines, I’m honored to represent the conservative perspective. I hope to model what is too often lost by our elected leaders: learning from others, disagreeing respectfully, and focusing on finding real solutions for our country.”

Meanwhile, there’s a social media campaign to boycott “The View” because of Farah Griffin’s hiring, according to Decider.

Veteran panelist Navarro, who joined the show in 2015 as a contributor and appeared frequently as a guest co-host since 2018, is considered one of the leading political voices in the U.S. and was the national Hispanic co-chair for late Sen. John McCain’s 2008 presidential campaign. She is also a political commentator on CNN and Telemundo, and will resume her duties at those networks, ABC said.

“Ana has made an indelible impact on ‘The View’ since the first time she joined us at the table,” Teta added. “She is a strong independent thinker with savvy insight, not to mention that she is whip-smart and fiercely funny. We are very happy to officially welcome her as a co-host.”

“It’s been a long courtship, but we’re finally making it official,” Navarro said. “I love being on the show, and I love living in Miami. I’m happy I will be able to do both.”

The series also made headlines again as Goldberg and conservative panelist (and former co-host) Elisabeth Hasselback debated reproductive rights during Hasselback’s return to the show as a guest host Wednesday.