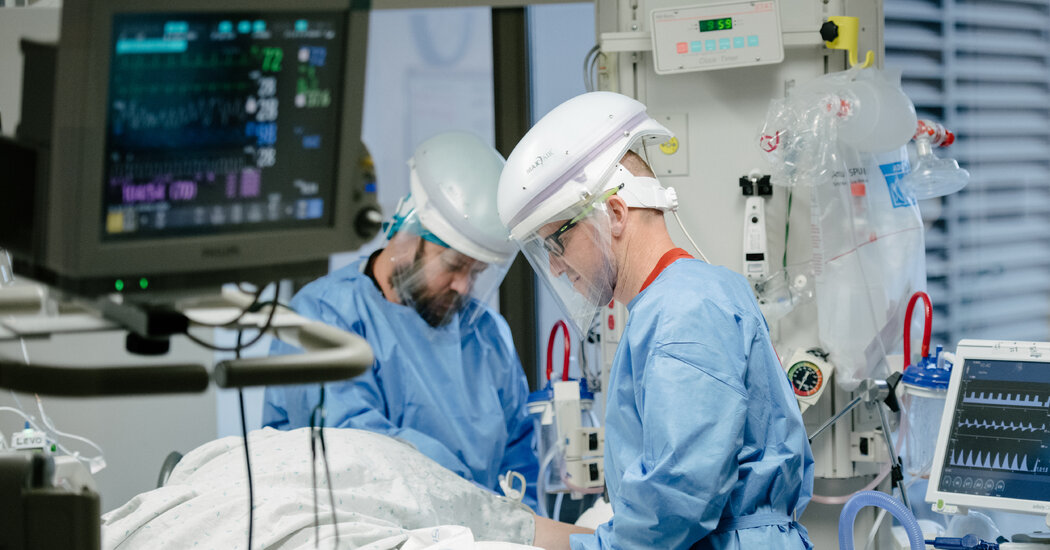 SPOKANE, Wash. — Surgeries to remove brain tumors have been postponed. Patients are backed up in the emergency room. Nurses are working brutal shifts. But at Providence Sacred Heart Medical Center in Spokane, Wash., the calls keep coming: Can Idaho send another patient across the border?

Washington State is reeling under its own surge of coronavirus cases. But in neighboring Idaho, 20 miles down Interstate 90 from Spokane, unchecked virus transmission has already pushed hospitals beyond their breaking point.

“As they’ve seen increasing Covid volumes, we’ve seen increasing calls for help from all over northern Idaho,” Dr. Daniel Getz, chief medical officer for Providence Sacred Heart, said in an interview. As he spoke, a medical helicopter descended with a new delivery.

At a time when Washington State hospitals are delaying procedures and struggling with their own high caseloads, some leaders in the state see Idaho’s outsourcing of Covid patients as a troubling example of how the failure to aggressively confront the virus in one state can deepen a crisis in another.

On the Washington side of the border, residents must wear masks when gathering indoors, students who are exposed to Covid face quarantine requirements, and many workers are under vaccination orders. On the Idaho side, none of those precautions are in place.

“It’s ridiculous,” said Cassie Sauer, the president of the Washington State Hospital Association. “If you have your health care system melting down, the idea that you would not immediately issue a mask mandate is just bizarre. They need to be doing everything they can possibly do.”

Last week, Idaho took the extraordinary step of moving its hospitals in the northern part of the state to crisis standards of care — the threshold at which facilities facing overwhelming caseloads are authorized to ration their resources, perhaps withholding or delaying optimal care for some patients.

Idaho now has more than 600 patients hospitalized with Covid-19, about 20 percent higher than a previous peak in December. Only 40 percent of the state’s residents are fully vaccinated, one of the lowest rates in the nation, compared with 61 percent in Washington State, one of the highest.

The strain on health care facilities is particularly evident in northern Idaho, where the vaccination rate is even lower; the area just hosted the North Idaho State Fair, and in a region where there is deep wariness of government, no mask orders or other strategies were adopted to halt the spread of the virus. At Kootenai Health in Coeur d’Alene, a conference room has been converted to house excess patients.

With the Delta strain of the coronavirus sweeping the nation, Washington State has faced its own challenges and record hospitalizations, especially in areas on the eastern side of the state where vaccination rates are lower. This week, that state, too, began talking openly about the possibility that crisis standards of care could become necessary.

But Washington is in better shape than Idaho, where hospitalizations as a share of the population are 45 percent higher.

“We certainly need our friends in Idaho government to do more to preserve their citizens’ health, because we know that their crisis is becoming our problem,” Washington’s Democratic governor, Jay Inslee, said last week. “I’m asking the people of Idaho to adopt some of the safety measures — like masking requirements — like we have in Washington so we can help both of our states reduce this horrible pandemic.”

In Idaho, Gov. Brad Little’s office said he was not available for an interview, but he has indicated in recent weeks that he has no plans to restore virus restrictions, even if hospitals entered dangerous territory, saying that he wanted residents “to choose to do the right thing and get vaccinated.” He issued a statement on Friday saying he was exploring legal action to halt a mandate from President Biden that will require millions of people to get vaccinated.

“President Biden is out of touch, and his mandates only add to the divisiveness within our country,” Mr. Little said.

The governor has urged personal responsibility, and in northern Idaho, where schools are not requiring masks or doing contact tracing, health care leaders have grown exasperated at statements from members of the community suggesting that they do not believe the situation is as dire as doctors and hospital administrators portray it.

“That’s extremely disappointing,” Dr. Robert Scoggins, medical director of the intensive care unit at Kootenai Health, said at a news conference on Wednesday. “In north Idaho, we don’t have a lot of mitigation going on. In taking care of these patients in the I.C.U. that are very sick, they regret that they didn’t take this very seriously.”

Dr. Getz and other doctors in Spokane have not resisted taking patients from Idaho. Providence Sacred Heart has long seen the neighboring state as part of its larger community, and when there is space, the facility has opened its doors. But the transfers have helped push the hospital toward its own capacity limits.

Last week, 29 of the facility’s inpatients were from Idaho. The number of patients sent over to the emergency room from Kootenai Health alone was up 34 percent in August, officials said. MultiCare Health System, which also has a hospital in Spokane, has also seen a substantial rise in calls for support from Idaho — although, like Providence, capacity issues have forced them to decline some of the requests.

It is not uncommon for hospitals to divert patients during busy periods or transfer them to facilities where there might be specialists better suited to their needs. But the current virus spike in the region — and across much of the country — has left hospitals scrambling for options. In Spokane, Providence has fielded calls from hospitals as far away as Texas and Missouri, which also have large outbreaks.

Hospitals are generally obligated under federal law to accept transfer requests when there is space to care for them. For cases in closer proximity, officials said, patients may drive themselves across state lines to hospitals where they believe they can get more immediate care, and hospitals must care for those who show up at their door. For patients without insurance, the hospitals may end providing the care for free.

With the influx of patients, both from within the community and from across state lines, Providence Sacred Heart has seen patients stuck in the emergency room for hours longer than normal, awaiting an open bed. Those who do have a bed may not get a place in the I.C.U., as they normally would. The hospital has begun canceling elective procedures and is proceeding only with those that are urgent, Dr. Getz said. Procedures to excise brain tumors and treat orthopedic injuries are among those that have been postponed, he said.

“We are delaying care for people who are in misery,” Dr. Getz said. “It’s agonizing for those patients. This has real impacts on these people who are waiting.”

Care rationing under crisis standards of care would go even further. In Idaho, that has meant nurses have higher patient loads and are authorized not to check vital signs as often as usual. If the situation were to deteriorate, with insufficient supplies or staff to manage caseloads, health officials said, care rationing could mean having to decide which patients get priority for oxygen or ventilators.

States across the country have discussed triage plans that could be used when admissions reached a crisis level, but few have actually activated them. Arizona and New Mexico activated their crisis plans earlier in the pandemic, but Idaho appears to be the only state with those standards currently in effect.

Medical staff members have struggled to keep up in both states. Some are quitting, unable to endure more of a pandemic that has already consumed them for 18 months. Some are demoralized by what they see as the public’s failure to take the virus seriously. Nurses are regularly working 16-hour shifts.

Mary Jo Moore, a director of critical care at Providence Sacred Heart, said health care workers frequently deal with anger from people who are asked to wear masks or told they cannot have visitors. Some patients come in refusing to believe they are infected with the virus, and some push for unapproved forms of treatment.

“There’s a lot of verbal abuse that the staff are taking right now,” Ms. Moore said, as she walked through Covid units, where nurses were caring for patients who had been placed on their stomachs in an attempt to help them breathe.

“And I have staff like this that are as pleasant as can be,” she said. “And they are coming back to work every day and providing care for these patients.”