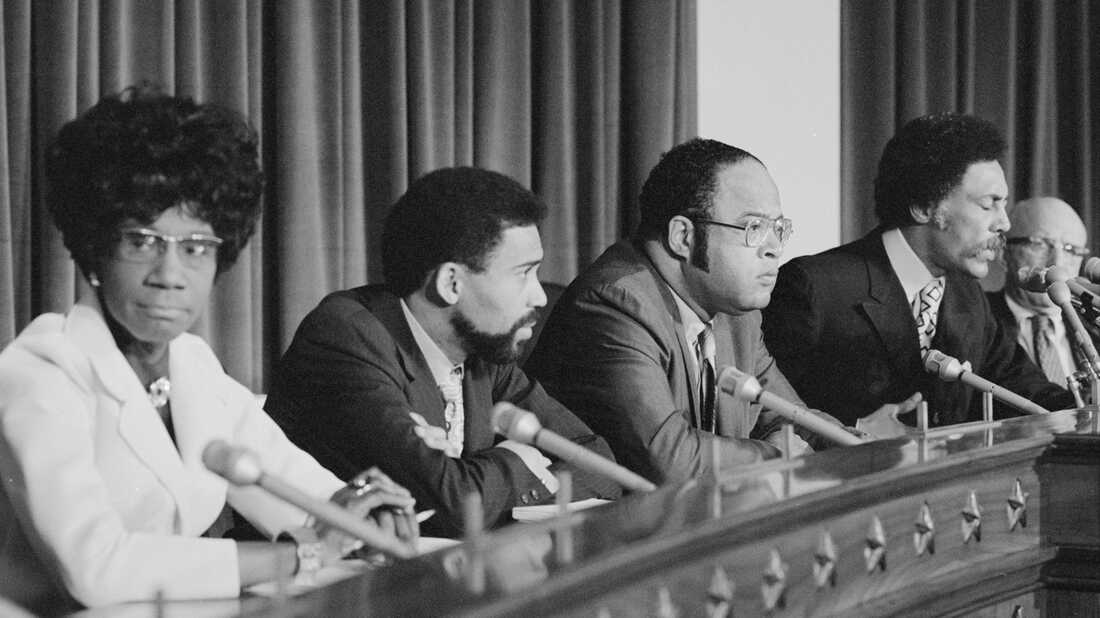 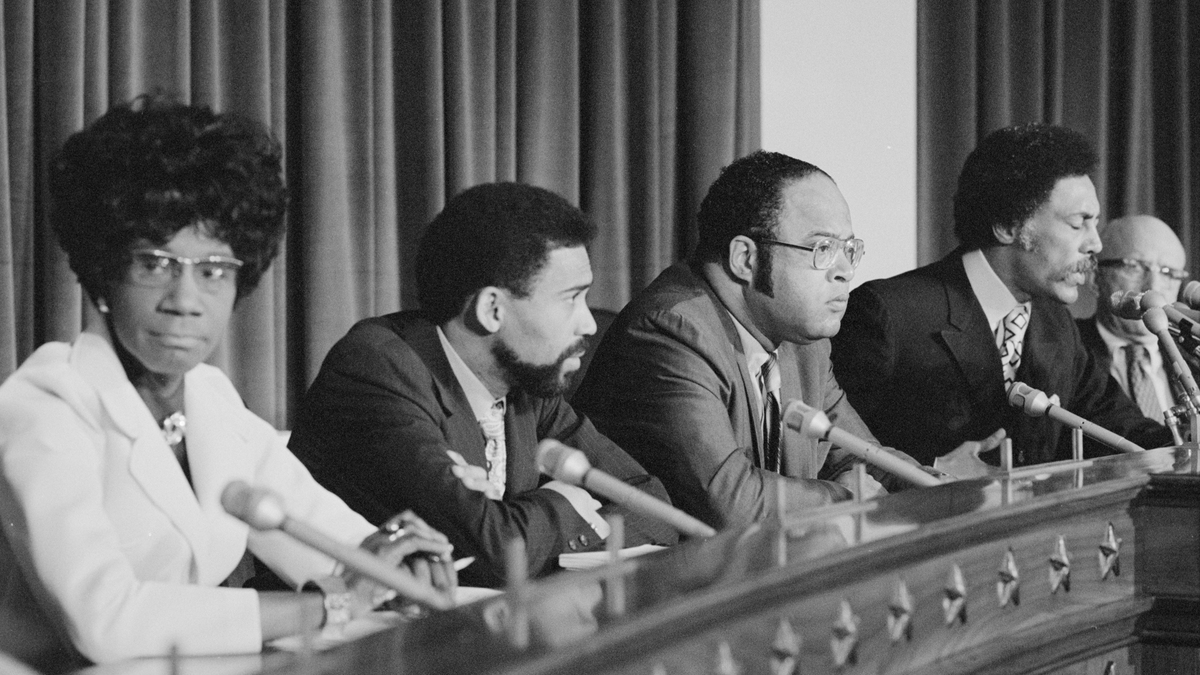 Redistricting is often an exercise in party loyalty in which Republicans draw voting lines to benefit Republicans, while Democrats do the same for other Democrats, but in Missouri’s 1st Congressional District more than 50 years ago, an unlikely alliance of state legislators changed those rules.

“It was tradition every 10 years for the legislature to create three congressional districts in the St. Louis metropolitan area,” wrote former Congressman William Lacy Clay Sr. (who also goes by Bill Clay) in his 2004 book Bill Clay: A Political Voice at the Grassroots. That was when the population of Black residents would be spread out just enough to water down the potency of their vote.

Then, in the 1960s, more than a dozen Black legislators joined with Republicans and rural Democrats to create a congressional map that included a majority African American 1st District setting the stage for Bill Clay to win the seat in the 1968 election.

Today, Missouri’s 1st Congressional District is the only one in the state with a plurality of Black voters.

“If you’re Black in America doing politics, Republicans have a tendency to be existential enemies. And white Democrats are totally unreliable,” Jones says.

Many Black Democrats, like Jones, also believe having an African American member of Congress makes it more likely to elect other Black officials down the ballot. And Jones says it’s pretty obvious why Republicans are willing to work with Black Democrats in the redistricting process.

“Because white Democrats would like to spread out Black voters because they’re reliable Democrats. Which means, it makes districts that Republicans have to run in more competitive.”

Since the 1960s, two Black congressmen have represented the 1st District in Missouri — Rep. Bill Clay and his son, William Lacy Clay Jr., who goes by Lacy Clay.

That all changed when Cori Bush, a Black progressive woman, defeated Lacy Clay last August in the Democratic primary. That meant that a Black woman from Missouri was poised to go to Congress for the first time.

And even though Bush still had to win a general election, that was a foregone conclusion since the St. Louis and St. Louis County-based 1st District is the most Democratic in the state, by far. 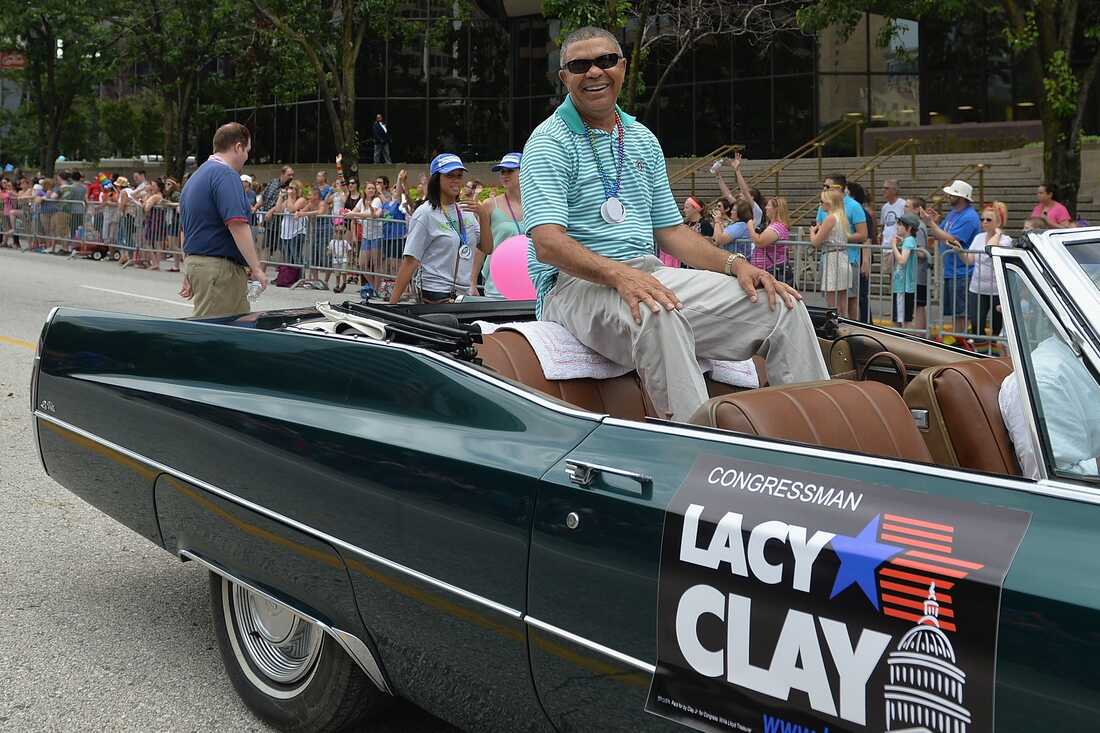 Michael B. Thomas/AFP via Getty Images 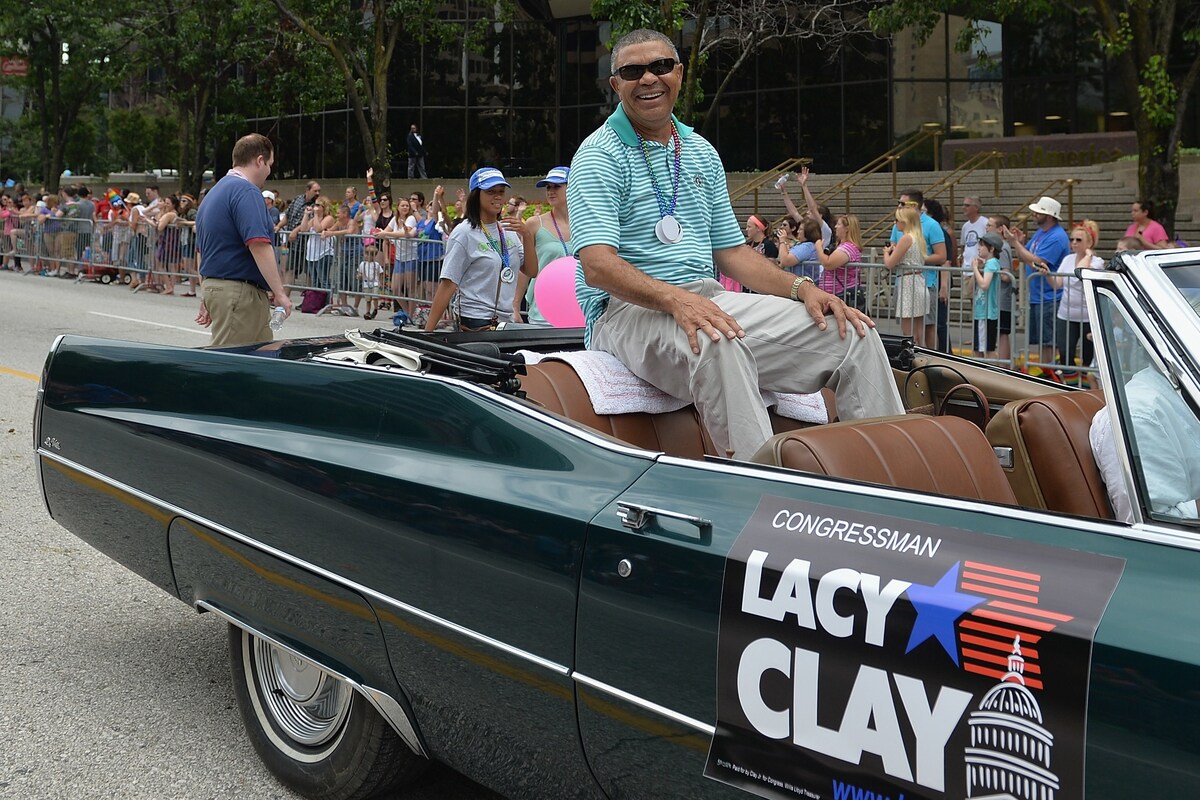 Former U.S. Rep. Lacy Clay rides in a car during the annual PrideFest parade in St. Louis, Missouri on June 28, 2015. Clay was defeated in the 1st District 2020 primary by current Rep. Cori Bush, also a Democrat.

Michael B. Thomas/AFP via Getty Images

But that relationship — between Black Democrats and Republicans — is about to be put to the test when Missouri lawmakers go back into session in the coming months to redraw congressional boundaries.

This kind of allyship in redistricting has happened in other states. And while African American political leaders in St. Louis see it as a necessity to maintain power in a racially hostile political environment, others see it as a self-defeating strategy that leads to more Republicans being elected to Congress from Missouri — which, they add, hurts Black people in the long run.

While the 1st District’s demographics aren’t likely to change significantly because of the Voting Rights Act, population loss will force its boundaries to expand into largely white suburbs. It’s something that both Rep. Cori Bush and St. Louis’ Black political leaders are watching with great interest.

“As an African American woman, I think it’s imperative to be able to see representation,” says state Rep. LaKeySha Bosley, a Democrat from St. Louis who serves on a committee looking into congressional redistricting. “You need to see yourself in these positions.”

It should be noted that it took close to 50 years for Missouri’s congressional map to shift from largely Democratic to largely Republican. Much of that can be traced to the state’s rural areas souring on Democrats after decades of allegiance. But many Missouri Democrats have been hostile to the 1st District for packing many reliable Democratic voters into one area — and making the suburban districts safer for the GOP.

Democratic state Rep. Donna Baringer, a Democrat from St. Louis, says the act of packing is part and parcel with a redistricting strategy that creates safe districts — as opposed to competitive ones that are most accountable to voters. She said that voter frustration about not having their voices heard is directly tied to creating a bunch of safe districts.

“I tell them: ‘It all comes down to redistricting,’ ” Baringer says. ” ‘If we’re going to have packed seats, whether it be a House seat, Senate seat or congressional seat, you’ll get exactly what you get for the next 10 years.’ “

Jeff Smith, a former Democratic Missouri state senator who completed his master’s thesis on redistricting and has a Ph.D. in political science, says that Black Democrats in Georgia and North Carolina also forged alliances with Republicans in the past to boost African American representation in their congressional delegation. But while those moves meant more Black people from those states were sent to Washington, D.C., it also resulted in maps that were more favorable to Republicans.

Yurij Rudensky, the redistricting counsel for the Brennan Center for Justice, says some Black Democrats are turning down overtures from Republicans to create more majority-minority districts during redistricting. He pointed to how Stacey Abrams rejected such a deal when she was a member of the Georgia House.

“It is important for Black communities, particularly in the St. Louis area, to receive effective representation,” Rudensky says. “Whether or not Black lawmakers need to create a political alliance with Republicans in order to make that happen is a different question.”

Smith says it’s very possible for a Black candidate to win in a district that is less than 50% African American, with some exceptions in the Deep South. Bush herself won in 2020 thanks to strong support in white parts of the district and much-improved performance in largely Black areas compared to her unsuccessful 2018 bid against Clay. And on the other side of the state, African American Congressman Emanuel Cleaver represents a Kansas City-based district that is not majority Black. 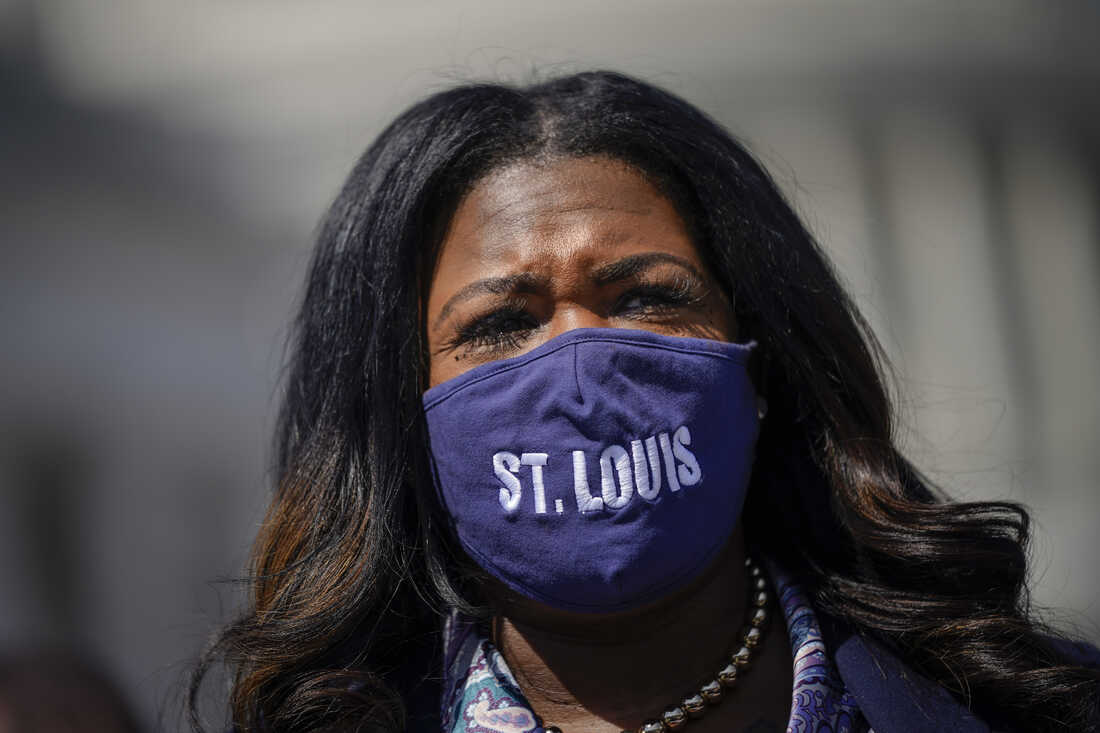 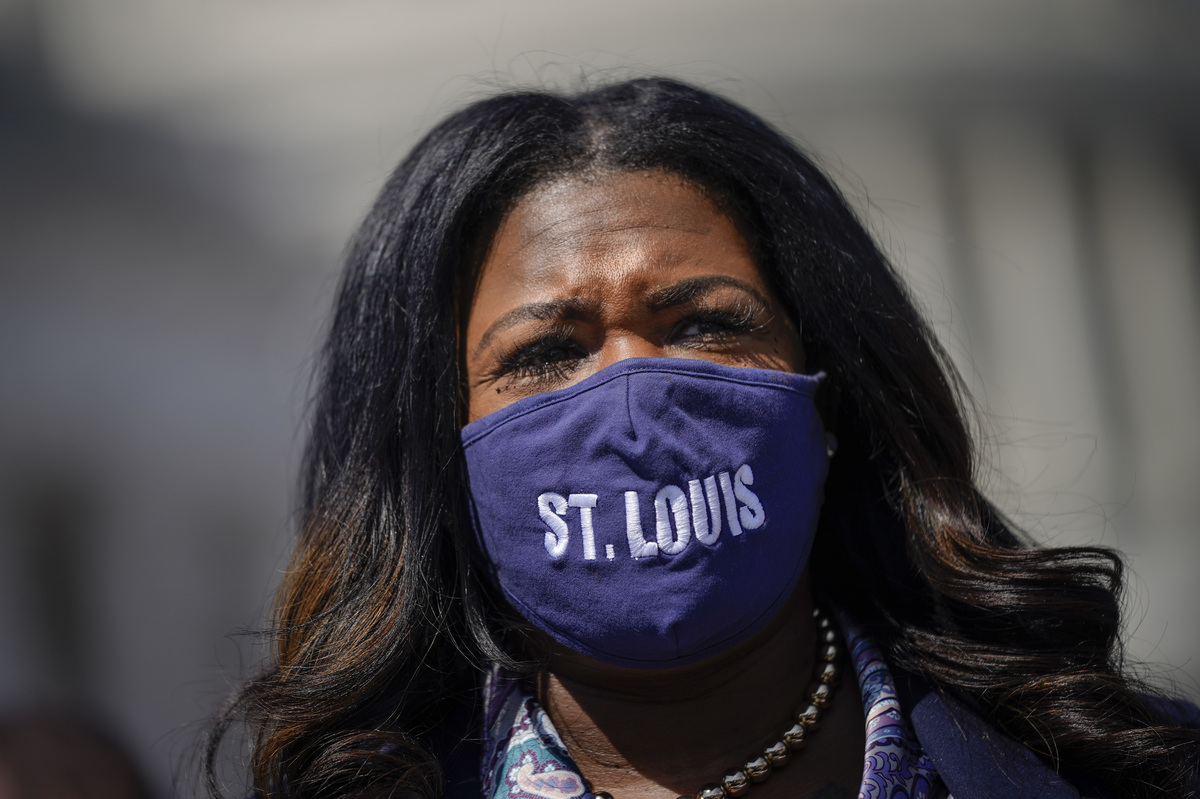 Rep. Cori Bush, a Democrat from Missouri’s 1st District, speaks during a news conference to discuss proposed housing legislation outside the U.S. Capitol on March 11 in Washington, D.C.

But even if the Voting Rights Act wasn’t a factor, former state Sen. Scott Rupp, who chaired a Senate redistricting committee in 2011, says there’s not much incentive for Republicans to accede to Democratic wishes to reduce the 1st District’s Black population.

“The typical alignment of groups and typical political alliances, it all gets thrown out the window,” Rupp says. “And it all comes down to each individual member of Congress’ self-preservation.”

Because the 2020 census showed that the 1st District lost tens of thousands of people, Missouri lawmakers will have to expand into largely white suburbs. That wouldn’t make Bush vulnerable in a primary against a white opponent in a one-on-one matchup, but depending on how the lines are drawn, it could have long-term consequences for who gets elected if Bush should decide to leave office.

For her part, Bush says protections such as the Voting Rights Act “have been helpful to make sure there’s representation on a federal level for this community — which, we deserve to have that.”

But Bush adds that she didn’t want to get into the hypotheticals of “where I would like the lines of my district to be drawn, or any district for that matter.”

I don’t believe that [Republicans] are looking at fairness or equity and equality and inclusion as they’re making these decisions. I would hope that they would fix that.

Still, Bush says she’s wary about Missouri Republicans who are in charge of the redistricting process. Not only did she point to other states, like Texas, that have passed what she calls “unfathomable, extremist” election laws, but she also notes that Missouri Republicans refused to follow through with voter-approved Medicaid expansion until the Missouri Supreme Court forced their hand.

“I’m extremely concerned about the anti-democratic tendencies, and I’m calling them anti-democratic … of the Missouri Republican Party,” Bush says. “I don’t believe that they’re looking at fairness or equity and equality and inclusion as they’re making these decisions. I would hope that they would fix that.”

Bush says she’s hoping that Missouri Republicans conduct a redistricting process in the coming weeks that is inclusive and takes into account the voices of Black, Latino and Asian Missourians.

“They have to feel that representation because they’re seeing it change their lives,” Bush says.