Tom Barrack, the real estate investor and early financial backer of Donald Trump’s 2016 presidential run, has been criticised by prosecutors for making large consultancy payments to a former colleague who could be called to testify in his trial on charges of illegal lobbying.

Jury selection in the trial, one of the highest-profile criminal prosecutions yet to emerge from the Trump presidency, is set to begin on Monday. Prosecutors will argue that Barrack broke the law by seeking to influence Trump’s foreign policy on behalf of the United Arab Emirates government.

The case opens a window on a freewheeling period of US diplomacy under a president who disdained traditional alliances and sought to craft a more transactional foreign policy. Eschewing the advice of career state department officials, Trump often consulted instead with a trusted circle of executives from the worlds of finance and real estate.

Prosecutors have said they may seek testimony from people who have worked for Colony Capital, the investment firm founded by Barrack, who have knowledge of his interactions with the Trump White House, as well as Barrack’s dealings with foreign officials and federal law enforcement.

In court filings in September, prosecutors complained about Barrack’s decision to pay $15,000 a month to one of those potential witnesses, his former executive assistant Alison Marckstadt, while she was serving in a consultancy role on his legal defence team. Prosecutors have said that Marckstadt has no legal training or experience and that her hiring “creates an appearance of impropriety”.

Marckstadt’s lawyers did not respond to a request for comment.

Barrack’s lawyers have stated in a court filing that Marckstadt was chosen “because of her long history and experience…of working with Mr Barrack on administrative matters,” and that they did not know she might be a witness.

The government claims Barrack repeatedly sought to sway US policy at the behest of the United Arab Emirates without first registering as a foreign agent as federal law requires. He is also accused of lying about his activities to agents from the FBI. Barrack denies the charges.

In one 2017 episode that prosecutors have cited in their case against Barrack, the US investor allegedly tried to help the UAE win support for a regional embargo on its gas-rich neighbour Qatar. In another, prosecutors say he sought to persuade US officials to list the Muslim Brotherhood as a terrorist organisation.

“This will be a huge win [if] we can list them,” Rashid Al-Malik, an Emirati who has also been charged in the case, wrote in a message to one of Barrack’s colleagues that was cited by prosecutors. The authorities say Al-Malik served as Barrack’s handler while living in Los Angeles on a student visa. He left the country shortly after an interview with FBI agents in 2018 and has not returned.

Barrack was an influential figure in the Trump White House, even though discussions about serving in roles such as US ambassador to the UAE did not result in an official appointment.

He has known Trump since the 1980s, when he persuaded the future president to pay $400mn to buy New York’s Plaza hotel. Barrack spoke in support of his friend’s candidacy — then seen as a long shot — at the Republican National Convention in 2016. He also served as chair of Trump’s inauguration committee and provided informal advice to the Trump White House.

The dual roles as unofficial presidential counsellor and executive chair of Colony may have provided Barrack with opportunities to profit from investments in the Middle East at the same time as nudging the course of US policy towards the region, according to a report by congressional investigators and documents filed in the criminal case.

An investigation by the House of Representatives committee on oversight and reform in 2019 detailed how Barrack pushed a plan to sell nuclear power technology to Saudi Arabia, at the same time as pursuing a deal that would have allowed Colony to take stake in a US reactor maker that was among the proposal’s likely beneficiaries. 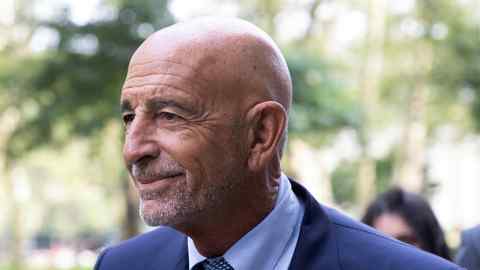 While the nuclear deal ultimately stalled and does not feature in the criminal case against Barrack, another effort to meld money and politics appeared to be more fruitful.

US authorities say that, at the same time as he was acting at the direction of the UAE, Barrack secured $374mn of capital commitments from the country’s sovereign wealth funds. An email sent by a Colony employee and later obtained by investigators stated that “[w]hile the primary purpose of the [investment fund] [will be] to achieve outsized financial returns”, it would also “garner political credibility for its contributions to [Trump’s] policies”.

Barrack left Colony last year, receiving termination benefits including vesting of equity awards and a cash payment of $21.4mn. Shares in the New York Stock Exchange-listed company have fallen nearly 70 per cent in the past five years. Barrack’s son and daughter also left the company last year, receiving severance payments that added up to more than $400,000.

Prosecutors have not accused Colony of any wrongdoing, and the company has sought to move on from Barrack’s tenure, renaming itself DigitalBridge as part of a shift towards investing in data centres and other digital assets. DigitalBridge is making payments to cover Barrack’s legal bills.

The case underscores how Trump’s approach to governing blurred the line between statecraft and financial empire building, not only for the president himself but also for some of his associates.

The former Colony chief is standing trial alongside Matthew Grimes, a 28-year-old former executive at the firm who worked for Barrack as an analyst and was quickly promoted to vice-president. Grimes denies acting as an unregistered agent of a foreign government.

Barrack is helping to pay Grimes’s legal fees. In a letter to the judge last year, prosecutors argued the fee arrangement “has the potential to affect defense counsel’s advice, including . . . whether to seek possible leniency by co-operating with the government against Barrack”.