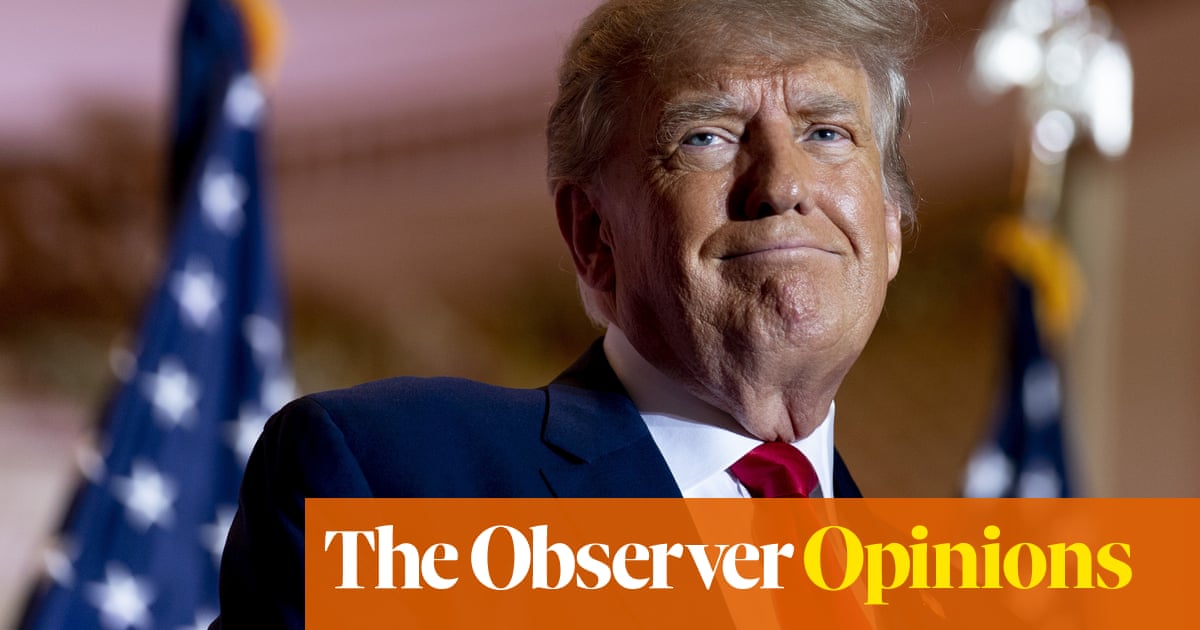 For a man dismissed as a sad, bad loser who “rages at the dying of the right” while the world – and the Republicans – leave him behind, Donald Trump attracts a lot of attention. And that’s the whole point of his latest presidential bid.

It’s not even certain that Trump really wants the gig. No former president has recaptured the White House for a second, non-consecutive term since the Democrat Grover Cleveland in 1893. It would take some doing. Is his heart really in it?

Fact is, Trump, now 76, is work-shy and lazy. As president he didn’t pay attention to briefings or do his homework. He preferred to play golf. His constant skiving, off-the-cuff decision-making and Oval office tantrums proved he wasn’t fit for the job.

Yet by launching his re-election campaign so far in advance, Trump has embarked on a marathon. It’s not principles or idealism that will sustain him. It’s not shop-worn cliches about America made “great and glorious again”.

The truth is more mundane. Trump, high-handed braggart-in-chief and low-life star of multiple criminal and civil investigations, just cannot bear to be ignored. He cannot stand the thought of someone else winning. And he badly wants to avoid jail.

Last week’s long-winded, fib-filled announcement of his 2024 candidacy was a reminder of Trump’s ability to fascinate even as he appals. Half-a-dozen New York Times columnists immediately felt compelled to register their lack of interest, at considerable length.

[Fox News’s once slavish pundits, who have reportedly dropped him on Rupert Murdoch’s orders, visibly struggled on air to break their Trump fixation-addiction. They watched his speech from his Mar-a-Lago swamp the way rats watch a snake.

Analysts have been busy explaining why he will not win again: voters are tired of lies and crude insults; the country cannot afford four more years of chaos; the failure of many Trump-backed midterm election candidates shows his appeal is fading.

Big campaign donors and former allies are distancing themselves as a motley troupe of wannabe rivals advances. Even his daughter, Ivanka, a former aide, has had enough. She plans to spend more time with her other children.

It’s already received wisdom on the left that the Republicans will self-destruct in a scrap for the party nomination. The most fancied king-slayer is Ron DeSantis. To channel Barack Obama, the rightwing Florida governor is the lipstick on the Trump pig.

And yet, and yet … bandwagon-loads of wishful thinking cloud these calculations. Trump retains the support, mostly, of his famed “base” – the Maga core. He continues to attract torrents of individual cash donations. The politics of grievance have deep roots. DeSantis has not said he will run.

And he is dusting off his election playbook, which confounded conventional wisdom in 2016. He will again cast himself as the underdog, the outsider, the only candidate who calls out corrupt Washington elites. Trump, after all, is an expert on corruption.

Might this work? Yes, says commentator Kevin Williamson. Trump “is not as weak a candidate as many people might expect, or hope, him to be,” he warned. Despite all the caveats, he remains the man to beat, in pole position.

Fool me once, shame on you. Fool me twice, shame on me … Could America really fall for this vaudeville charlatan all over again? Polls suggest most voters want neither Trump nor Joe Biden in 2024. Yet if there is a rematch, who can say what will happen.

Even Jeb Bush, George W’s dull-ish brother, mocked last week’s speech as “low energy”. But there’s no denying Trump, in his dog days, retains a showman’s ability to whip up a crowd, make waves and break news (fake or otherwise). He thrives on what Margaret Thatcher described as the “oxygen of publicity”.

The mere fact that he is back in the running may undercut US global leadership. Coupled with the Democrats’ loss of the House of Representatives, it raises questions about Biden’s continuing authority. Biden told the world: “America is back.” Trump#2 would take it backwards.

Vladimir Putin, for one, will be happy Trump is in the frame. The great appeaser is notoriously sweet on Russia’s war criminal boss. Putin and his fans, such as Hungary’s leader Viktor Orbán, hope the Maga mob will force reductions in aid for Ukraine.

Autocrats and authoritarians everywhere will be rooting for a Trump comeback. His comrade-in-arms, Benjamin Netanyahu, in office again in Israel, has no time for Biden. The Saudis, having invested so much, expect a return – in both senses.

The odd man out in this welcoming committee of tyrants and strongmen will be China’s president, Xi Jinping. Just the thought of a second Trump presidency is enough to wipe the smile off his face – if he ever smiled, that is.

European leaders, the EU and Nato will pray it doesn’t happen. And after his sexist, discriminatory behaviour towards Theresa May, how might Trump redux treat the UK’s latest prime minister, Rishi Sunak? It hardly bears thinking about.

Trump says he’s in it to win it in 2024. But that’s not the whole story. What the ultimate narcissist wants most of all is attention, preferably the uncritical, fawning variety. To stir up a storm, he will follow his tried and tested 3D formula.

Some politicians offer blood, sweat and tears. Trump noisily offers disruption, distraction and division – in the service of his ego, not his country. The best, sensible course would be to ignore him. But that is not how the world works.

Trump is still box office. He makes headlines. He sucks up energy. He is the nightmare on Pennsylvania Avenue, a Mary Shelley monster. It’s hard to take your eyes off him, and dangerous to try. He’s not over.